It seems improbable that the mountain landscape of Savoie in far eastern France near the Swiss and Italian borders is capable of producing ripe and fleshy red wines. After all, this is a region known more for its ski hills than its wine. But a well directed slope and mountain buffers can do wonders for creating the kind of heat that allows a vine to produce fully ripe fruit over the course of a growing season. 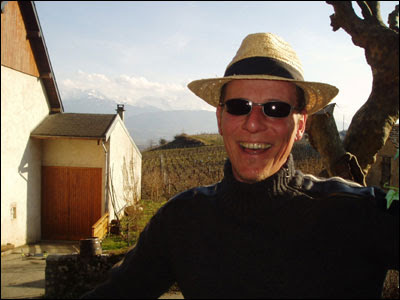 Viticulture in Savoie is pure opportunism, only two percent of the region’s agricultural lands are occupied with vines. As such, production is small and generally consumed by locals and the tourists that flock to the region for hiking and skiing. Yet this patchwork of vineyards encompass more than twenty crus and account for over a dozen significant grape varieties. It’s in the cru of Chignin – part of the crescent-shaped stretch of limestone scree known as the Combe de Savoie that is known to produce the greatest Savoie wines – where Jean-François Quénard is doing his life’s work.

You can find up to a half dozen domaines named Quenard just on a single signpost along the route du vin southeast of Chambéry but only one of them is the impressive Jean-François Quénard. He owns 37 acres of vineyards around the village of Chignin and took over winemaking from his father in 1987 after studying winemaking in Burgundy, Gigondas, Bordeaux, and California.

The primary grape for Jean-François’ red wines is the indigenous Mondeuse, a spicy, sappy variety high in acid. Cuvée “Elisa” is classic Mondeuse, blackish-purple and laden with juicy wild berries. Old vines give the wine concentration while vinification in barrel provides depth. Structurally, it can be compared to the most ambitious of Cru Beaujolais but with fruit that tends more toward mulberry and blackberry. Pair it with a thick, heritage-breed pork chop from our new favorite local butcher.