A Tale of Two Rioja – Modern and Classic

With less than 55 acres of vineyards, Artuke Bodegas y Viñedos is most certainly a family affair. Artuke is the contraction of the names of Arturo and Kike de Miguel Blanco, brothers and third generation viticulturalists in the historical Basque province of Álava. Although their father still helps with vineyard maintenance, and their mother will have a plate of food at the ready for family members and visitors alike, it’s the two young men who have completely remade the winery to focus on small vineyard plots in and around their village of Abalos in the high elevation foothills of the Cantabrian Mountains.

Their wines reveal the characteristics of the Alavesa sub-zone, the northernmost and smallest of the three Rioja sub-zones, where the cooling influence of the Atlantic Ocean meets the warmer interior. This unique climate has the effect of ripening Tempranillo grapes with slightly thinner skins, yielding wines with superb fruit and freshness.

A blend of 90% Tempranillo and 10% Graciano from vines as old as 95 years, Pies Negros means Black Feet, a reference to the archaic method of crushing the grapes using one’s feet – a method that the brothers are determined to use to this day, as they believe the gentle crushing helps to maintain the purity of the fruit. After fermentation, the wine is aged for 14 months in a combination of new and older 225 liter oak barrels, resulting in a wine that’s full of mature, dark red fruits and a touch of spice with a firm finish.

Today, there are few Rioja Gran Reservas that can match the elegance and power of Marqués de Murrieta’s most venerated label, “Castillo Ygay” Gran Reserva Especial.

Only made in the best vintages, The 2005 is a blend of 89% Tempranillo and 11% Mazuelo (aka Cariñena) from “La Plana”, their finest single vineyard site at around 1500 feet of elevation. The wine ages for a period of 30 months in 225 liter oak barrels, with at least 10 months in new oak. It then matures for a further two years in bottle before being released. Luis Gutierrez of Robert Parker’s Wine Advocate calls the 2005 Castillo Ygay “a classic among classics” and “a true vin de garde which develops complex notes of violet and meat with time in the glass.” The Peñín Wine Guide says it’s the best 2005 Gran reserva of Spain and gives it a robust 95 points (if you’re keeping score).

The Marqués de Murrieta bodega is located in the western subzone of Rioja Alta just south of the poplar-lined River Ebro. The immense wall of the rocky Sierra de Cantabria to the north holds the Atlantic winds at bay. Where the grand hillsides aren’t covered in vines there are handsome pastures for cattle and sheep. Scattered about are thickets of juniper, boxwood and holly. Oak, beech and pine grow in the highlands. 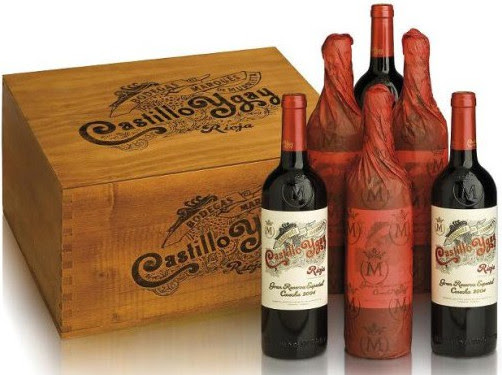 Not just a great wine from one of the top winemaking regions in Spain, the six pack, red mahogany-stained wood box is filled with bottles wrapped in red tissue with the Marqués de Murrieta logo. It makes a beautiful gift or a lovely centerpiece in the cellar. 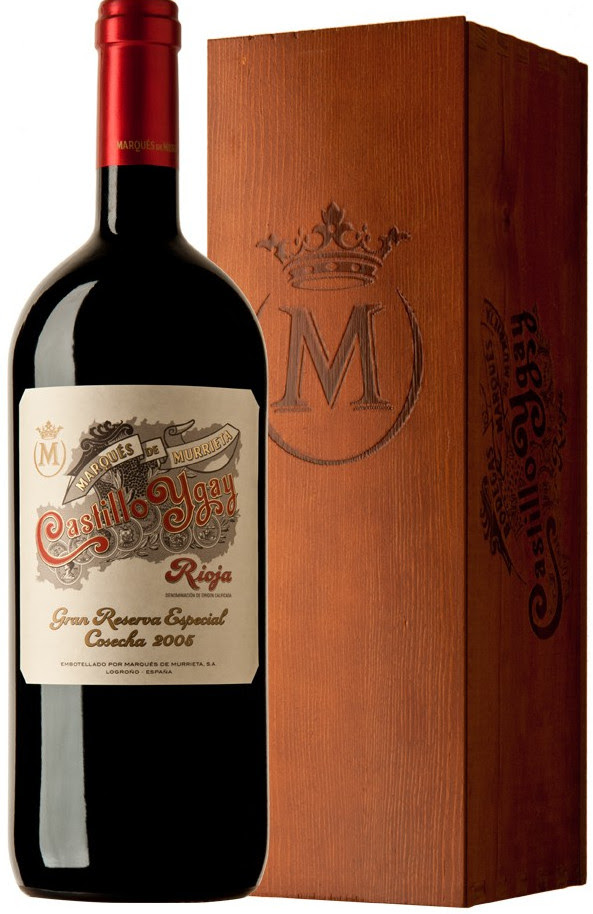 Go big with the 1.5 liter magnum in its own red mahogany-stained wood box. These are very limited, highly allocated bottles, and we were able to source a handful. Besides being a great gift, one of these will make you the life of any party, especially a party involving an excessive amount of roasted beast.