Marguet’s Naturally Grown Champagne Channels His Biodynamic & Homeopathic Practices: “A Vitality About The Fruit That Makes It Feel Truly Alive.”

True disciples call it the future of wine, and even the naysayers are beginning to admit that after years of practicing biodynamic, the dividends are irrefutable. And nowhere in Champagne is this more evident than at Champagne Marguet, where Benoît Marguet is one of the few growers in the region to have thrown himself, body and soul, into homeopathy.

It’s easy to think of Champagne as a spiritual substance; after all, it was created by monks and the very airiness of its identity seems celestial. The cornerstone of biodynamics is a view of the vineyard, and its subsequent produce, as a singular organism capable of self-healing and self-propagation. Natural material alone sustains the soil; chemical fertilizers and pesticides are forbidden and range of animals creating a rich, fertile environment for the vines to thrive in. For Benoît Marguet, this goes beyond biodynamics as a concept; it’s a vision of complete harmony in every stage of winemaking and an improvement in his own personal life which translates into his Champagne. 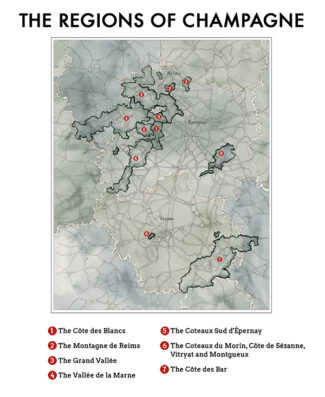 Forming a broad and undulating headland that covers five thousand acres of thicket and vineyard, the Montagne de Reims stretches 30 miles east to west and, north to south, is about five miles wide. The vines hug the limestone slopes of the western and northern flanks and are planted in a huge semicircle that extends from Louvois to Villers-Allerand.

This is Pinot Noir country (except in Trépail and Villers-Marmery, where the Chardonnay can be found). The most northerly of Champagne’s four demarcated regions, the Montagne de Reims is also the most well-known, with more Grand Cru sites than anywhere else in the AOP. Tectonics gave the region mountains of chalk, and the Romans added their two cents by leaving behind huge limestone pits known as Crayers. Within, the humidity remains at around 60% and temperatures at a steady 57°F; perfect cellaring conditions to soften the cold-climate acids of Champagne with time on lees. As a result, Louis Roederer, Ruinart, Veuve Clicquot, Krug, Taittinger and Mumm all store wine here.

Like the Hatfields and the McCoys (without rebel flags and shotguns), Bouzy and Ambonnay have a longstanding rivalry built on begrudging respect and competitive moxie. At its closest point, the distance between the two communes is less than a long drive with a golf club, and each have shored up a reputation for superlative wines from the south side of the Montagne de Reims hill.

Yet connoisseurs will happily point out their favorite qualities in each, generally citing the special elegance of wines from Ambonnay, due in part to undulating, south-eastern exposures that moderate the ripening process.

In contrast, Bouzy exposures are almost entirely to the south, ideal for Pinot Noir. More than nine hundred acres in Bouzy are under vine, with 87% of them Pinot Noir, 12% Chardonnay and a scant 0.2% Meunier. The most prominent Champagne houses with a Bouzy presence are Bollinger, Duval-Leroy, Moët & Chandon, Mumm, Pol Roger and Taittinger.

Nearby Ambonnay shares a nearly identical terroir with Bouzy and is similarly appointed, although with slightly less Pinot Noir grown and a bit more Chardonnay—white grapes accounts for about 20% of the vineyards. Like Bouzy, ‘Ambonnay Rouge’ represents a small portion of wine production. Prominent Champagne houses that control Ambonnay vineyards include Duval Leroy, Moët & Chandon, Mumm, Piper Heidsieck, Pol Roger and Roederer.

Champagne Marguet has been a bellwether for innovation since 1883, the year that Émile Marguet began to graft his vines onto American rootstocks in the face of the impending invasion of phylloxera. Alas, so ridiculed was the notion throughout Champagne that Marguet wound up tearing out the grafted vines and promptly declared bankruptcy.

Ratchet forward a century and a half: In 2006, Émile Marguet’s distant scion Benoît Marguet joined forces with Hervé Jestin, the former chef de cave of Duval-Leroy, and began to produce a special homeopathic and biodynamic super-cuvée called ‘Sapience’, first released in 2013. Being on the cutting edge of trends has finally paid dividends. Today, Benoît farms 25 acres of vines, all using biodynamic practices. Most are owned by Marguet himself while the rest are leased from relatives. Among them are eight different lieux-dits with an average vine age of 42 years; each is bottled under the name of the plot and reflects the minute soil differences that exist throughout his holdings as well as the massale-select varieties he suits to his various terroirs—among them Les Crayères, Les Bermonts, Le Parc and Les Saints Rémys. 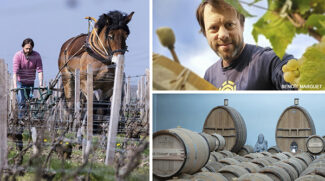 The Horses, The Vines and The Eggs

Two techniques keep Benoît Marguet close to his passion; first, since 2009, he has plowed his acres with a pair of draft horses. He argues that by using this method of cultivation roots are forced deeper towards the water table surface, providing a better water supply. In addition, he treats the soil with preparations made of essential oils, tisanes, nettles, citronella, lavender and rhubarb. “The well-being of the soil is a priority,” he points out. “The horse is in connection with the three elements of terroir, the mineral (chalk), the vegetal (vine and flora) and the animal (fauna and human interaction).”

Next, in the cellar, he continues to adhere to the principles of biodynamics by working the wine according to lunar cycles. Under the conviction that the shape of a vat can affect the quality of the wine, he installed special 40hl egg-shaped wooden cuvée casks produced to his specifications by Tonnellerie Taransaud. The unique shape provides a height/width ratio equal to the Golden Mean or Phi, which Benoît believes is a natural feature repeated throughout the physical world and encourages spiral convection currents and a harmony to better clarify the wine… and his own purpose.

“This symbiosis, with the principle of nature assisting nature, is fascinating research work for me, with influences from various cultures and countries,” Benoît maintains. “In my opinion these fundamental or elemental practices are solutions that instill within our wine its full health benefits, and perhaps even more…” 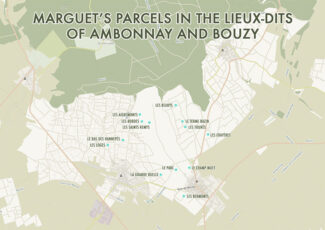 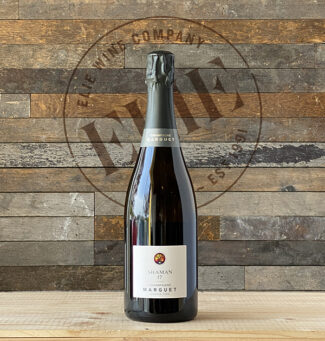 Champagne Marguet ‘Shaman’, Grand Cru 2017 Brut Nature ($58)
67% Pinot Noir, 33% Chardonnay, bottled with no dosage and drawn entirely from Grand Cru parcels in Ambonnay in Bouzy. ‘Shaman’ is a suitably cosmic name for Biodynamic Benoît’s NV line-up, but it’s fairly recent: Formerly called ‘Elements’, there was a trademark conflict with California’s Artesa that drove the name change. The base wine comes from the abbreviated 2017 vintage, which saw rainfall in August that caused a hurry-up harvest to prevent botrytis. The nose is ripe with notes of cherry blossom, white peach and spice while the palate is broad and expansive with rich stone fruit and a firm, concentrated mineral core. (Disgorged January 2021, no dosage.) 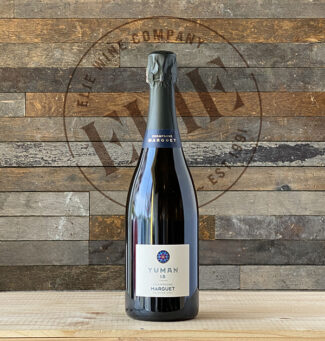 Champagne Marguet ‘Yuman’, Premier Cru Blanc de Blancs 2018 Brut Nature ($58)
100% Chardonnay from the Premier Cru village of Vrigny, located in the Petite Montagne de Reims—the northwestern part of the Montagne de Reims. Chardonnay makes this somewhat unusual for Vrigny, which is known primarily for Pinot Meunier, a variety that makes up 71% of the vineyard plantings. Bottled in July 2019, disgorged in February 2021 without dosage, the wine shows a beautifully pure, elegant and intensely mineral profile that is textbook Blanc de Blancs. No dosage. 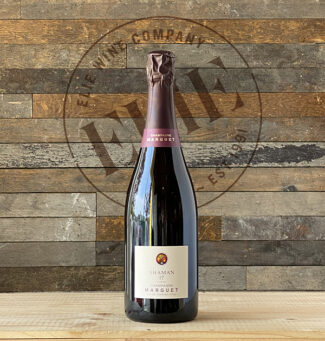 Champagne Marguet ‘Shaman’, Grand Cru Rosé 2017 Brut Nature ($58)
The base wine is from 2017, complemented by reserve wines from a solera established in 2010. 59% Chardonnay from Ambonnay and 41% Pinot Noir from both Ambonnay and Bouzy; Disgorged November, 2020 and labeled Extra Brut, although with 0g dosage, it is actually Brut Nature. Offers aromas of sweet berries, spices, orange and dried flowers with bright acids, a chalky structure and a pinpoint mousse, concluding with a saline finish. No dosage. 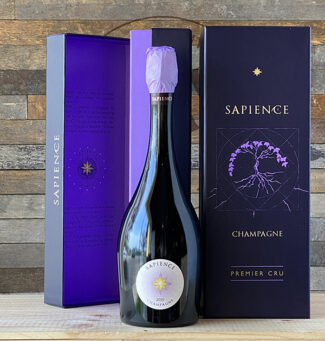 Champagne Marguet ‘Sapience’, Premier Cru 2010 Brut Nature ($200)
A blend of 50% Chardonnay, 25% Meunier and 25% Pinot Noir, the wine is a cooperative effort between four top biodynamic growers, Benoît Marguet, Benoît Lahaye, Vincent Laval and David Leclapart: Leclapart provided the Chardonnay, Lahaye the Pinot Noir and Laval the Meunier, while the vinification was done in Marguet’s cellar. The base wine spends two years aging in barrels before the second fermentation in bottle. With the balance and effortlessness of the best grand marques and the depth of terroir of the best grower Champagnes, the wine provides a creamy nose with hints of dried fruit; warm nut-bread flavors on the palate that are in absolute harmony with the wine’s vibrant minerality. (Disgorged January 2020, no dosage.)

To some, the idea of a still Champagne is like a vegan who eats meat, but the truth is, with global warming infiltrating the world’s vineyards, cold regions like Champagne are increasingly able to produce wonderful wines minus la mousse. Spread across 319 communes, the AOP ‘Coteaux Champenois’ signifies dry, still wine from Champagne; they may be red, white or rosé from virtually the same footprint that produces sparkling Champagne. The majority of Coteaux vineyards are planted in a temperate maritime climate with slight continental influences, particularly in the southeast. Like sparkling Champagne, seven grapes are permitted in the Coteaux. Beside the familiar trio (Chardonnay, Pinot Noir and Pinot Meunier), also allowed are historical varieties Arbane, Petit Meslier and the Pinot derivatives, Pinot Blanc and Pinot Gris. 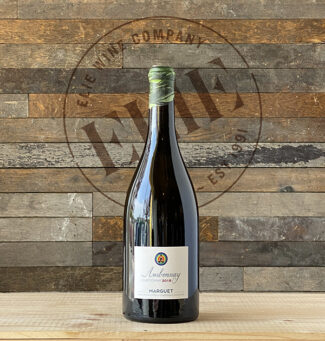 Marguet, Coteaux Champenois Grand Cru Ambonnay Blanc 2018, ($100)
100% Chardonnay, 100% Grand Cru from lieux-dits Le Parc and Les Crayères (planted in 1970). The nose is effusively floral with aromas of apple blossom and white peach, echoed on the palate with bee’s-wax and orange, with an intense chalkiness at its core. Aged in oak for 18 months prior to bottling; about 800 bottles made in total. 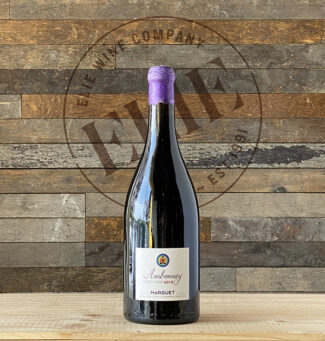 Marguet, Coteaux Champenois Grand Cru Ambonnay Rouge 2018, ($100)
Pinot Noir requires more hang-time on the vine to fully ripen, and Marguet only produces red Coteaux Champenois in exceptionally warm years; 2018 was one of them. Les Saint Rémys is a parcel of 100% Pinot Noir located on the west side of Ambonnay near the border of Bouzy and produces a lightly-toned red wine with plum, raspberry and sloe on the nose followed by a silky, fruit-driven palate with the tug of stony minerality. 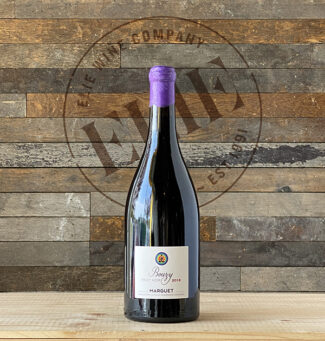 Marguet, Coteaux Champenois Grand Cru Bouzy Rouge 2018, ($100)
Thanks to south-facing slopes, Bouzy is one of a few Champagne villages with a strong tradition of red wines. Among the many lieux-dits, Les Loges is a Grand Cru site just below the middle of the slope to the northwest of the village, and this is the vineyard from which Marguet draws his fruit. The wine shows clean dark-cherry and blackberry with a noted spiciness on palate and substantial but ripe tannins. 553 bottles made in total