No red wine appellation is more synonymous with ‘perfume’ than Volnay; the wines have historically checked all the boxes for quality, vigor and longevity but with an aromatic delicacy traditionally referred to as ‘feminine.’ The appellation has existed since 1937, and is reserved for Pinot Noir-based red wines exclusively. Although the region contains no Grand Crus, more than half of the vineyards covered by Volnay’s 526 acres are rated as Volnay Premier Crus. Just across the boundary that delimits Meursault, Volnay-Santenots is grown on terroir better suited to Pinot Noir than Meursault’s legendary Chardonnay. 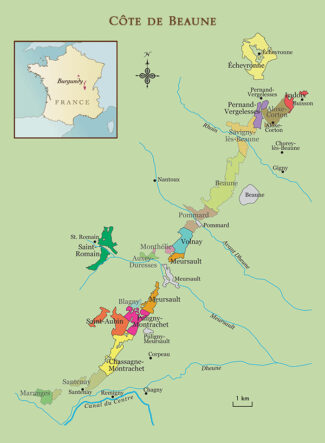 The appellation stretches across a narrow band of oolitic limestone on the hill of Chaignot, with vineyards facing south-east. At the top of the slope, the soil is pink in color with pale green inclusions overlain by schist. As the ground descends, white, chalky-textured argovien limestone takes over, with a third layer of reddish Bathonien limestone finally giving way to deep gravel soils at the foot of Chaignot.

These varied soils combine to give relatively small Volnay a remarkable number of recognized lieu-dits (24) and climats classified as Premier Cru (34), each unique in expression, but yoked by an inimitable Volnay style: Spicy fragrance, elegant structure and silken mouthfeel, qualities that transcend producers, both of the traditional old guard and the innovative new. 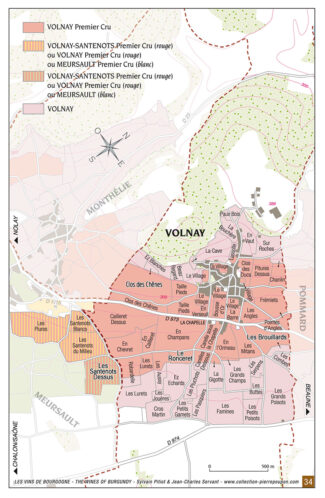 Regarding the 2019 vintage in Côte de Beaune, Bernard Hervet (former director of Faiveley and Bouchard) states that it might rival 1865, ‘the greatest vintage of all times,’ Dimitri Bazas of Maison Champy says, “If you offer me a contract for 30 years and it promises me that every year will be like 2019, I would say, where do I sign?” The spectacular results are cellar-worthy gems of intensity, depth and precision. This is the end-product of alignment—the stars, the climate, and the experience of winemakers. The challenges of the weather were exactly what led to such phenomenal success; spring was colder than normal, with frosts in April leading to uneven flowering and by June, millerandage (a condition in which small, seedless berries appear amid healthier grapes) promised greatly reduced harvests. An extraordinarily hot summer further reduced yields, nearly cooking some grapes on the vine and making them unusable for the top maisons, but leaving the rest with an incredible depth of flavor.

Overall, the 2019 wines of Côte de Beaune possess splendid terroir expression, freshness and poise, and will improve for many years despite being highly drinkable now.

Brightness, vigor and delightful when youthful are among the hallmarks of Volnay’s charm, so when young siblings Guillaume and Sarah Glantenay took over Domaine Georges Glantenay from their father Pierre in the 2013 vintage, they came to symbolize the very essence of their product. Working with under twenty acres total, only half of which is in Volnay (the Glantenays have vines in Chambolle-Musigny passed down from Guillaume and Sarah’s grandmother, and also holdings in Pommard), they have embraced ‘lutte raisonnée’—a viticultural technique that translates to ‘the reasoned struggle’ and involves as little artificial intervention as possible; land is ploughed with horses and pesticides are kept to an absolute minimum. Sarah Glantenay is the brand’s ambassador, while Guillaume handles the viticulture; in the cellar, the grapes destemmed, then given a short, cool maceration, following which fermentation occurs using natural yeasts. “I look for a balance of freshness and power with a potential for aging,” Guillaume says. “2019 was a classical vintage with great density.

This special package contains one of each the following four 2019 wines for $324.

2019 Domaine Georges Glantenay, Volnay Premier Cru Les Brouillards ($94): Brouillards is the domain’s flagship wine, and their largest Premier Cru holding. It is on the Pommard side of the village, to the north of Premier Cru ‘Les Mitans’ and across the road from Premier Cru ‘Les Angles’. With about 25% whole-bunch fermentation, most of the vines date to 1950 (2 acres) and 1999 (3/4 acre). The wine is delineated and focused, and shows vibrant raspberry, black plum, sous-bois and a hint of allspice in a peppery finish. 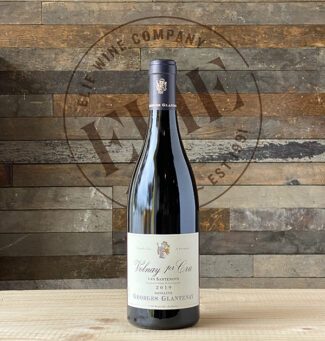 2019 Domaine Georges Glantenay, Volnay Premier Cru Les Santenots ($94):Glantenay makes two Volnay Santenots, one a white Village and this one, from 60-year-old, Guyot-trained vines in Santenots-Dessus, where soils are a mixture of clay and limestone with chalky marl subsoils. More new oak (45%) is used in this cuvée, creating a perfumed wine showing peony and rose petals and a decadent helping of cherry cobbler before an elegantly complex finish. 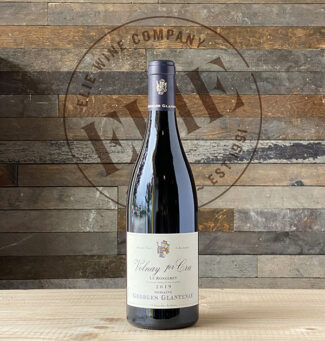 2019 Domaine Georges Glantenay, Volnay Premier Cru Le Ronceret ($85): Ronceret is located low on the Chaignot slope, just below Premier Cru ‘En Champans’. From a single acre of vines in a Premier Cru often considered the most accessible and early-drinking in Volnay, it takes its name from a term meaning ‘blackberry bush’. The fruits are redder and brighter on the nose, but darken on the palate, adding minerality and mocha to a sensuous and delightful wine.

Rain and early frost delayed flowering, but that proved to be a boon since a disastrous hailstorm hit on June 6 when budding was just getting started, and so, extensive damage was avoided. More hail in the end of June along with damp weather made mildew a threat, but a heat spike in late July was welcome, at least in the best-run domains that had carefully managed canopies and avoided sunburned bunches. An outbreak of oidium (a fungal spore) followed, and when harvest began in late September, sorting was required to remove damaged or dehydrated bunches.

As a result, 2012 wound up as a spotty vintage where the best estates prevailed; it is certainly a vintage in which to trust top maisons and the best vintners.

With roots in the 16th century, Domaine Bernard & Thierry Glantenay is an old family domain with 500 years of history in Volnay. Up until around fifteen years ago, the estate sold its grapes to négociants. That changed with Thierry taking the reins from his father, and today, the full production is sold as domain bottlings. Having trained as engineer, Thierry brings a meticulous attention to detail to his winemaking, using no more than 25% new oak for even his top wines in search of terroir expression; his goals are to showcase the purity of fruit in the delicate framing of tannin. He draws from 17 acres near the bottom of the Chaignot, where rich silt and brown clay overlay the limestone. His lieu-dit wines are considered among the best in the region, with vines between 60 and 80 years old. Thierry himself is a star in the Côte de Beaune, and as an added bonus (because he is working in the village of Volnay rather than Vosne-Romanée or Gevrey-Chambertin) his wines offer extraordinary values amid today’s stratospheric Burgundy price tags. 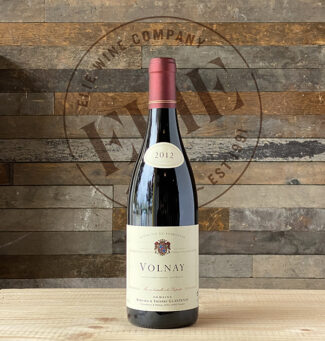 2012 Domaine Bernard & Thierry Glantenay, Volnay ($79): A Village wine assembled from several plots at the bottom of the Volnay hill, including two Premier Cru sites, Volnay Premier Cru ‘Lurets’ and Volnay Premier Cru ‘L’Ormeaux’. The other plots are from lieux-dits ‘Grands Poisets’ and ‘Buttes’. A well-crafted wine with a floral bouquet, medium-bodied with soft, supple tannins and a spicy tail. 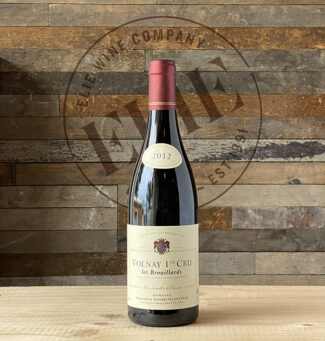 2012 Domaine Bernard & Thierry Glantenay, Premier Cru Les Brouillards ($120):  Around three acres in size (the domain’s largest holding), the Brouillards vineyard was planted between 1947 and 1955; the site is exceptionally well-drained and the southeast exposure ensures even ripening. It shows a generous bouquet with ripe cassis and wild strawberry scents with touches of peppermint in the background. The wine, somewhat hard on release, has mellowed and gained flesh, and provides a sensual and harmonious experience. 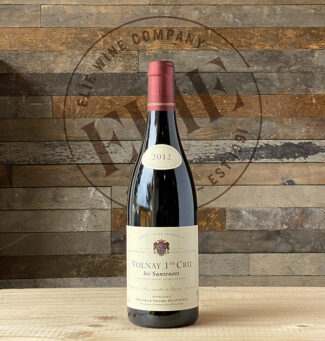 2012 Domaine Bernard & Thierry Glantenay, Premier Cru Les Santenots ($128): A little over an acre and a half in size, ‘Santenots’ is located entirely in the municipality of Meursault on red limestone soil strewn with gravel and clay on a south facing slope. With an élevage in 30% new wood lasting 15-18 months, the wine’s aromatic bouquet is marked by primary notes of Morello cherry and violet which, after several years in the bottle, has developed hints of leather, sous bois, mushrooms and spices. 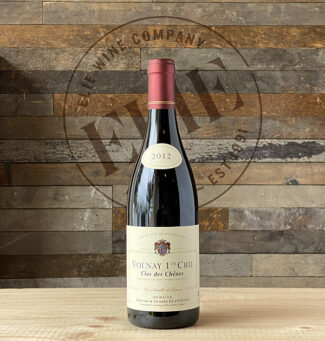 2012 Domaine Bernard & Thierry Glantenay, Volnay Premier Cru Clos des Chênes ($144): The renowned ‘Clos des Chênes’ is named for the centuries-old oak trees on the outskirts of nearby Monthelie. The lot is divided into two sections, one of old vines planted in 1938 on brown, clay-rich limestone soil clay and an upper plot of younger vines planted in 2002 on white marl. Combined, the area is a bit larger than an acre. New oak is nicely integrated into red currant and citrus aromas, which lead into a clean, fresh palate with keen acidity and a structured, almost chalky texture.