The Art of The Blend – Haut-Médoc Winemakers are the Real Face of Bordeaux: Six Producers Shine in 2018. (12-Bottle Pack $297, Tax Included)

‘Bordeaux blend’ (which, ironically, never appears on a Bordeaux label) is a loaded term, meant to elicit emotion and stir memories. That’s not a bad thing: In fact, it’s a paean to the world’s most synergistic appellation, where the art of the blend is the soul of the substance.

In France, wine discussions generally center on terroir—a sense of place—and the winemaker—the alchemy that someone discovers within their terroir. Grape varieties rarely enter the conversation except academically, because they are either a given, like in Burgundy, which circles single variety reds (Pinot Noir) and whites (Chardonnay), or else the art of the blend creates a wine that end up being greater than the sum of its parts.

Bordeaux is a complicated beast, bestowed with geography and climate that lends itself to the nurturing of multiple grape varieties. The wisdom of experience has honed the list of legally allowable grapes to six for red wine (Cabernet Sauvignon, Cabernet Franc, Merlot, Malbec, Carménère, and Petit Verdot), although climate change has become such a fact of life in Bordeaux that last year, in an effort to address global warming, France’s Institut National de l’Origine et de la Qualité INAO officially upended tradition and approved four new red wine grapes for Bordeaux, Arinarnoa, Castets, Marselan, and Touriga Nacional. The future will dictate how they perform in blends.

The Art of The Blend

The art of the blend begins before the first vine is planted; Bordeaux is a vast quilt of soil types that make some plots better suited for Merlot, others for Cabernet Franc, and so on. Each grape has a laundry list of physiological requirements, and the wise grower is in tune with them all. Thus, the graveled, quick-draining acres of Bordeaux’s Left Bank tend to be planted to Cabernet Sauvignon—a grape which thrives best with dry feet and delves deeply into the ground to produce juice bright with acidity, while the clay-heavy, moisture-retaining soil of the Right Bank is the environment preferred by Merlot, where the results are muscular and fleshy. Yet individual estates rarely possess monolithic geologies, and changing elevations offer certain vineyard sites better sun and wind exposures; as a result, most châteaux plant at least a couple types of grapes. And in the Haut-Médoc, home to some of Bordeaux’s most revered estates, the 10,000 acres of vineland is about half Cabernet Sauvignon with the rest divvied up between Merlot and Petit Verdot along with a negligible quantities of Malbec.

In any winery, once the grapes are harvested, the cellar work begins, and this is when the artisan winemaker truly plies his/her craft; the art of the blend. You cannot change vine placement or cultivars without extensive work, but a vigneron can (and must) evaluate how each variety does over the course of a growing season. That determines next steps, including varietal percentages for the final cuvée, extraction levels, élevage times (in oak, concrete or steel), whether malolactic fermentation is necessary to tame acids, and, of utmost importance, whether the wine will be aged as separate components or as a married blend. Rarely is there anything random about such decision-making; it is the culmination of experience and finely-honed palates. A winemaker must understand intrinsically not only how the wine will perform in the barrel, but how it will change inside the bottle over many years. 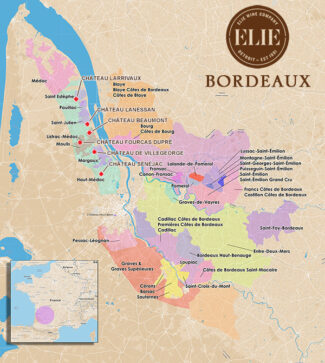 Haut-Médoc is a sub-appellation of the Médoc AOP, and represents only a small fraction of Médoc wines. Of the fifteen wine-producing communes of the Haut-Médoc, eight are located along the waterfront of Garonne and Gironde while seven lie inland. Originally an area of salt marsh, most of Haut-Médoc’s early agricultural history involved animal grazing rather than viticulture, so credit is due to 17th century Dutch merchants for engineering a drainage project to convert sufficient marshland into vineyards in order to provide the burgeoning British wine market with an alternative to the Portuguese wines then in vogue. It is fair to say that their mission was accomplished. Still, the climate of Bordeaux is subject to more fluctuation than, say, Oporto, and growers remain beholden to nature.

Haut-Médoc Has Delivered a Top Vintage in 2018

2018 was the sort of schizophrenic, binary season that has become more common in recent years, no doubt the result of global warming. Hard and steady rains in the first half of 2018 were followed by prolonged periods of heat and drought. With water tables raised sufficiently high, the vines did not suffer tremendously, but like all living things, extremes are not optimal—it’s like guzzling water on Monday, without access to water for rest of the week. Still, other than a hailstorm that decimated at least one estate, Haut-Médoc did well in 2018; the broad Gironde helps moderate summer temperatures and the skill and experience of the winemaker came into play; the art of the blend enabled some of the region’s lesser-known châteaux to conjure up marvelous wines that represent outstanding values.

This package, with dozen bottles ($297, all inclusive), contains selections from six of Haut-Médoc’s most highly regarded growers. The diversity of the wines in this package explains the variety of different terroirs over this area, a rarity within one and the same appellation. Despite these differences due to this mosaic of climatic and geological influence, the wines share the same family traits.

‘The Patriarchy’ may have gotten bad press over the past few years, but that has never been a concern at Larrivaux, which has been handed down through a line of women since 1580. These days, the triumvirate of Armelle Carlsberg, Sabine Carlsberg and her daughter Bérangère Tesseron run the estate—the latter is the wife of Basile Tesseron of 4th Growth Château Lafon-Rochet in nearby Saint-Estèphe, who in turn is the the nephew of Pauillac luminary Alfred Tesseron of Château Pontet-Canet. Larrivaux is in the north of Haut-Médoc, where the soils contain a greater percentage of limestone. As such, the fifty acres of vine are planted to a greater proportion of Merlot than much of the appellation, and as a result, the wines display a rich, plum/cassis profile. 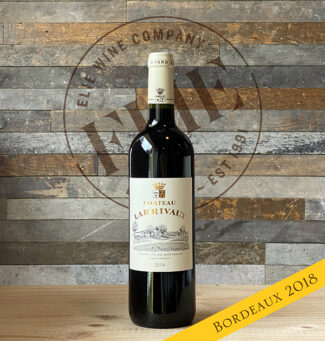 Château Larrivaux Haut-Médoc ($27)
It is composed of 64% Merlot, 26% Cabernet Sauvignon and Cabernet Franc with Petit Verdot in the balance. Bold and saturated, the wine retains a plushness that glides over the tannins with fruit compote top notes and flashes of mint and tobacco.

The vineyards of Lanessan are a microcosm of grape cultivation in Haut-Médoc; 52% Cabernet Sauvignon, 37% Merlot, 8.5% Petit Verdot, and 2.5% Cabernet Franc. Situated a stone’s throw from Saint-Julien, Lanessan is known for its impressive Tudor-esque château constructed in 1878 and an equestrian-focused setting with horse-shoe-shaped stables and an antique carriage museum on premise. The wine maintains a traditional style of Left Bank Bordeaux (dark berry notes, graphite, parching tannins) at consumer-friendly prices 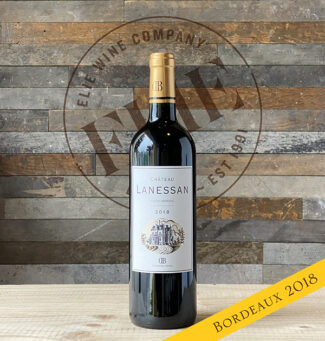 Château Lanessan Haut-Médoc ($24)
Presents a bright core of blackberry jam to add texture to the wine’s silky and appealing freshness; many layers of smoked meat, dried herbs and firm, fine tannins end with a mineral kick and a savory, almost salty finish.

With nearly three hundred acres of vine capped by a Renaissance-style mansion flanked by octagonal turrets, Beaumont is a large property that has passed through the hands of Lieutenant Colonels, Senators, and one ambitious industrialist named Joseph Germain who expanded the estate to its current size. In 1986, it was acquired by the Société Grands Millésimes de France, who also preside over Saint-Julien’s Château Beychevelle; the vineyards are planted on deep gravelly soils between Margaux and Saint-Julien, primarily to Cabernet Sauvignon, although the Merlot plantings do particularly well in dry summers like 2018. 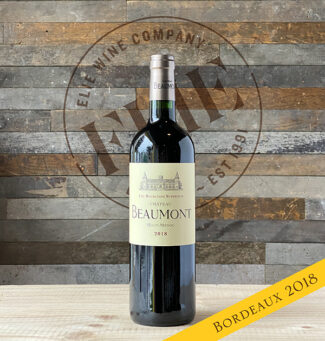 Château Beaumont Haut-Médoc ($23)
An even split of Merlot and Cabernet Sauvignon with 8% Petit Verdot, 2018 Château Beaumont shows warm cassis above an undercurrent of bay leaves, lavender and pencil lead; it’s nicely concentrated with plenty of depth and an herbal lift at the finish.

Fourcas-Dupré is located in a relatively tiny administrative parish in Médoc called Listrac. Only a thousand acres total, Listrac is recognized for producing some of the most iconoclastic (and potentially undervalued) wines in the region, filled with scents of licorice, forest bramble and leather. Château Fourcas Dupré combines the name of the locale (the Fourcas plateau) with that of the original owner, Maître Jean Antoine Dupré, who bought the land in 1843. This 13-acre estate has changed hands a few times since then, most recently ending up in the possession of Breton entrepreneur and wine aficionado Gérard Jicquel. The soils are primarily Pyrenean gravel, unique to the Médoc, along with chalky clay-limestone subsoil. 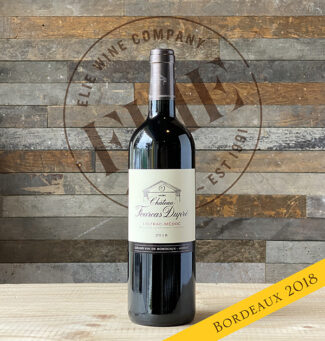 Château Fourcas Dupré Listrac-Médoc ($22)
Nearly equal parts Cabernet Sauvignon and Merlot. Ripe currants and blackberry appear in the perfumed aromatics, leading to the ‘sous bois’ (forest floor) character that is typical of the appellation with clove and pepper lingering amid the grainy tannins.

When ‘Cru Bourgeois’ level was created in 1932, Villegeorge was awarded Exceptional Growth status, one of only six wineries to receive the honor. A scant thirty acres in size, the vineyard blocks of Château de Villegeorge lie within commune of Avensan and has been certified sustainable by Terra Vitis since 2003. Currently owned by dynamic enologist Marie-Laure Lurton, the estate is said to only now be approaching its full potential, with consistent wines that offer richness as well as a stylish structure and concentration. 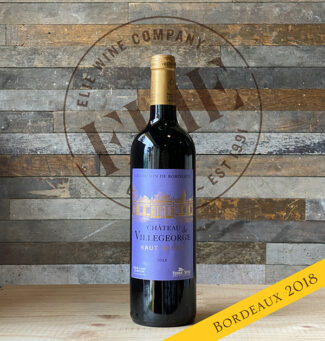 Château de Villegeorge Haut-Médoc ($22)
A welcoming wine with a whiff of anise in the top notes and a flood of black fruits, black currant, blackberry, black cherry to loft the palate through silky tannins and a persistent finish. Three quarters Cabernet Sauvignon with Merlot in the balance.

For an estate that has had an impact in Haut-Médoc for more than five hundred years, there have been relatively few families at the helm. The original owners held on to the property for two centuries, following which, the de Guignes owned Sénéjac from 1860 until 1999 when they sold to Lorraine Cordier, the owner of Chateau Talbot in Saint-Julien, Following Lorraine’s death in 2011, the estate was taken over by her sister, Nancy Bignon Cordier. Originally, Sénéjac was known for producing white Bordeaux, although currently, production is exclusively red. 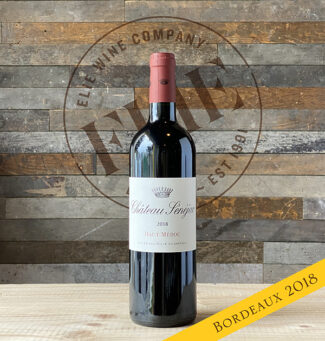 Château Sénéjac Haut-Médoc ($22)
The is 59% Cabernet Sauvignon, 29% Merlot, 7% Cabernet Franc and 5% Petit Verdot. A nose of a nose of warm berries, damp earth, perfumed dried flowers and fresh tobacco with some green pepper notes and a distinct, dusty garrigue underneath and nice chewy tannins on the finish.