In The Beginning Latour Created Cabernet-Merlot’s Sacred Synergy: A Bordeaux Like No Other in ‘Pauillac’ (3-Bottle Pack $375)

The mystique of Cru Classé Bordeaux transcends that of any other man-made consumable. Reverent vignerons will insist that great wine is made in the vineyard, and yet, however vital is nature’s role—fate, circumstance and geography—no gnarled, stressed, long-suffering centenarian vine ever produced a bottle of 1961 Grand Vin de Château Latour.

Great wines, especially those that become greater as they age, are the culmination of a very human attention to mechanics and detail.

And in Bordeaux, no detail is more important than the blend—a trick the winemakers of Latour learned before Columbus got his first compass. By 1492, two thirds of the famed L’Enclos vineyard was already planted with vines, a time when most other estates often made wine merely to supplement grain crops. Latour’s terroir is not unique, but it may be considered first among equals; the 227 acres (of which 116 contain the best and oldest vines in L’Enclos) slope gently across a gravelly surface with exceptional drainage, and beneath this is a moist subsoil composed of marl, chalk and clay. This provides ample geological diversification for the blending grapes to thrive, and the estate is planted to 80% Cabernet Sauvignon, 18% Merlot, and 2% Cabernet Franc and Petit Verdot—percentages that roughly mirror the Grand Vin’s cuvée. Whereas the Grand Vin of Latour leans heavily toward Cabernet; the second wine, Les Forts de Latour, typically contains a higher percentage of Merlot and the third wine, Le Pauillac de Château Latour, even more, making them softer and more approachable in their youth.

It’s the alchemy that occurs when these varieties combine that has established Bordeaux’s cache in the wine world. Blends vary from estate to estate and from vintage to vintage—flexibility is the key to success—but the two compulsory grapes are Cabernet Sauvignon and Merlot. It’s a pas de deux, a ballet in which the strengths of one shore up the strengths of the other, and any inherent weaknesses are diminished in the synergy. Cabernet (the dominant variety in the Médoc) has an inimitable savory character; peppery, dark currant fruit in the foreground with tobacco and cedar notes wrapped in brawny tannins. Merlot, in contrast, is soft stone fruit, plums especially, with silken tannins that melt into the juice. At Latour, the art of the blend is the culmination of work by more than seventy people; many had grandparents who were likewise employed at Latour. It is the meticulousness of the process, from vineyard to cellar, that requires so many hands; great wines begin in the vineyard, but they do not become great without the intervention of a conscientious human heritage.

The offered package contains three bottles of Le Pauillac de Latour for a total of $375.

‘Entry level’ is not a term you’d associate with a Premier Cru, but when you are as good as Latour, your third label can hold its own against many top releases. Made primarily for the restaurant industry, Le Pauillac de Château Latour is a user-friendly wine containing even more Merlot than Les Forts de Latour, making it accessible younger. This wine has been made every year since 1989, and is vinified from young vines in less prestigious sites throughout the estate using about 20% new oak barrels.

2015 Château Latour ‘Pauillac’, Pauillac ($125): 54.2% Cabernet Sauvignon, 41.7% Merlot and 4.1% Petit Verdot. 2015 was a brilliant vintage in Pauillac; a mild winter gave way to a warm spring, ensuring bud break and flowering went off without a hitch. Fortunately, August delivered some much-needed rain, which helped correct the drought-threatened growing season. The summer was hot, but cooler nights helped retain both acidity and fresh aromatics in the grapes, and aforementioned August showers helped relieve the stress on younger vines. The ensuing harvest was easy and relaxed and the wines were, virtually across the board, collectible.

First labeled in 1966, Les Forts is Latour’s second wine, and is often made from grapes grown within the Grand Vin plot, but which did not pass the rigorous qualification process required to make it to the Grand Vin; as such, it is regarded as a Grand Cru Classé-quality wine. Largely from edge-sections of L’Enclos, but also from Cru Classé areas of Pauillac such as Piñada, Petit Batailley and St. Anne, which have belonged to the estate for more than a century, and newer vineyards in the commune of Artigues. This variety of terroirs offer Les Forts a profile that may change slightly with the vintage, but always receives the painstaking care of the Grand Vin. A notable difference is the proportion of new barrels used in the maturing stage, up to 60% for Les Forts.

2015 Château Latour ‘Les Forts de Latour’, Pauillac ($288): A step below ‘legendary’ perhaps, 2015 was nonetheless an exceptional vintage in Pauillac, especially for long-established vineyards like Latour. An unseasonably warm spring and a heat wave in May laid the foundation for a stellar flowing, and it was followed by rain showers in June—welcome relief for the vines. July heated up and provided plenty of sunshine, although it was followed by one of the wettest Augusts in memory. These seesawing conditions affected younger vines, but those with decades of experience turned stress to advantage, providing wines that are concentrated with a wealth of fruit and firm tannins.

2014 Château Latour ‘Les Forts de Latour’, Pauillac ($280): 71.4% Cabernet Sauvignon and 28.6% Merlot. Pauillac was, quite arguably, the star appellation of 2014—a vintage which may be called ‘dramatic’ without overstating. For most of the season, it was shaping up to be a forgettable harvest (like 2013), but in September the weather shifted from damp to gorgeous, and a long Indian Summer that extended well into October led to a delayed harvest. One of the hallmarks of 2014 was this extended hang time, which in the finest wines manifested itself in rich, fresh fruit flavors and silky, polished tannins. As a result, the 2014 Les Forts has been called ‘Margaux-like’. 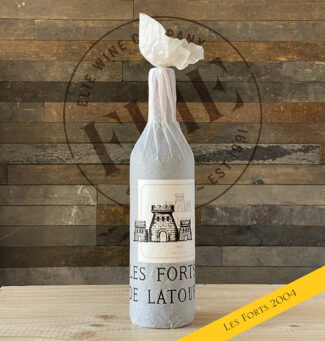 2004 Château Latour ‘Les Forts de Latour’, Pauillac ($320): 74% Cabernet Sauvignon and 26% Merlot. With an excess of vegetative growth forcing producers to be extra careful in managing foliage, and heavy August rains bloating and diluting fruit, 2004 was a spotty vintage through much of Bordeaux. But, as it is wont to do, Pauillac emerged as a top performer, buoyed along by a balmy autumn. Both the Grand Vin of Latour and Les Forts are considered classic in style; powerful, fresh and lively with concentrated fruit supported by an imposing tannic structure.

First mentioned as wine producing estate in 1331, among the numerous superlatives that have attended Latour’s history, of course, none is more noteworthy than 1855’s high-water mark of accolades. That year, being named one of four Premiers Crus (First Growths) when Emperor Napoleon III requested a classification system for France’s best Bordeaux wines based on the château’s reputation and trading price, when then was directly related to quality. A fifth Premier Cru (Château Mouton Rothschild) was added in 1973, but beyond that, the list is identical to the one compiled in the mid-nineteenth century. Situated in the southeast corner of Pauillac on the border of Saint-Julien, Latour is currently owned by François Pinault as part of Groupe Artemis. Despite the high demand, relatively little is made, generally around 11,000 cases.

* The following vintages, all excellent, may appear to be somewhat random, but in fact, after 2011, Château Latour abandoned the ‘en primeur’ (future) system used in Bordeaux to sell its most recent vintages, but has chosen instead to hold back releases until after it is bottled and not until the estate feels it is ready to drink. This allows Latour to closely manage the technical and commercial life of the wine rather than relying on the Place de Bordeaux and négociants to do their marketing and sales. For consumers, this has an added benefit of allowing a greater understand of the provenance of a given Latour. According to Latour’s general director Frédéric Engerer, “We think this new commercial rhythm is in line with a growing demand from wine amateurs to be able to acquire wines that reach a ‘drinkability phase’ and that have been kept in perfect conditions in our cellars.” 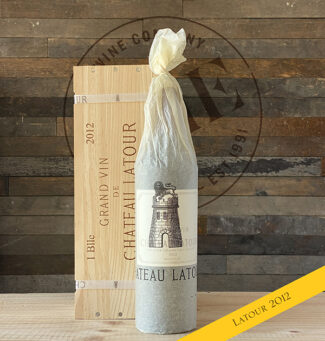 2012 Château Latour, Pauillac ($720):  Latour considers 2012 a ‘late vintage’; bud break occurred on April 3 and was followed by a wet month. June was mild, but rainy, which raised the specter of mildew, but things dried up in July and by mid-August, the beginning of veraison was noted. Dry, warm weather followed, allowing a slow ripening that preserved essential acids and resulted in a fine harvest between September 24 and October 16. The wine is intense and expressive with a long finish. 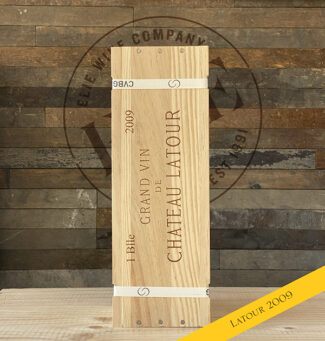 2009 Château Latour, Pauillac ($1,490): In 2009, a wet spring relinquished its hold in June, and the summer was the hottest and sunniest one since 2005. July saw a few storms, but a dry spell that lasted until veraison concentrated the juice and shrunk the berries; rain before harvest proved beneficial to refining tannins, and harvest took place from the last week of September to mid-October under splendidly sunny skies. The vintage is rated ‘exceptional’ and the wine displays extraordinary aromatic intensity and full tannins that will see improvements for many years to come. 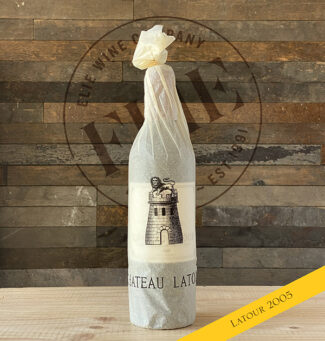 2005 Château Latour, Pauillac ($1,290): Historically, 2005 was singularly dry, a condition which generally leads to vine stress and slowed ripening. But a combination of vineyard management and the remarkable terroir within L’Enclos allowed the estate to dodge that bullet; the harvest, between September 26 and October 6, followed steady, gentle winds that concentrated the juice through evaporation, and resulted (in Pauillac specifically) in one of the most stunning vintages of the decade. The Grand Vin is exemplary, with enormously ripe fruit that should hold fast in the cellar. 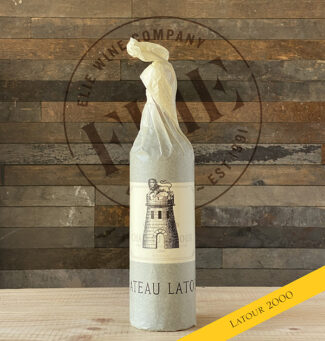 2000 Château Latour, Pauillac ($1,800): In wine country, rain can be a boon or a bane, and 2000 saw both. An exceptionally wet spring resulted in difficult flowering and uneven grape sizes along with the perennial threat of mildew. But, as summers have been wont to do in Bordeaux, conditions dried out in July and August, and on September 19, an inch and a half of rain fell on L’Enclos, having the effect of ‘washing away any impurities in the grapes before harvest’, which ensued two days later and lasted until October 11. The wine is balanced and structured, and the tannins are said to rival those of 1995 and 1996, two historically phenomenal vintages.

An exceptional vintage in Pauillac, the 2018 Grand Vin of Cinquième Cru (Fifth Growth) Château Haut-Bages Libéral is now being compared to the legendary 2009 and 2016. In part, it goes with the territory—Haut-Bages so close to Latour that their kids probably trick-or-treat at each other’s châteaux porches—dressed, no doubt, as phylloxera lice. Incidentally, Haut-Bages refers to its position at the top of the Bages plateau between Pauillac and Saint-Julien and Libéral refers to the family who owned the estate during the 18th century. The final blend of this wine is 79% Cabernet Sauvignon and 21% Merlot. ($59) 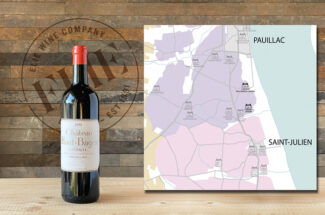