With apologies to Mr. Shakespeare, a rosé by any other name would probably be sweeter. The fortunes of pink wine have risen and fallen with consumer tastes, especially in the United States, where rosé has endured a shunning for being a backyard party drink to its recent status as a social media star. But in Europe, rosé has been a mainstay for centuries, and in France—which pumps out millions of gallons each year—there was pink before there was red, since the Greeks did not macerate their grapes and that is the technique by which darker wines obtain their color.

In Provence, where 91% of all wine produced is pink, rosé is (unofficially) classified by shade, lightest to darkest: Peach, Melon, Mango, Pomelo, Mandarin and Redcurrant. These gradations can apply to any blush from any appellation; they are based on the vigneron’s production methods and the grape variety used. But they are also a verbal ode to the lovely fruitiness prized even in the driest rosé, whether made in France’s cooler, damper North, or the warm and windy South.

This package, with dozen bottles ($246, all inclusive), contains selections from six of France’s most highly regarded rosé-producing regions. It represents the spectrum of hues and flavors that mark the climatic influence, as well as the common essence of the dry French ‘rosé style’ that makes it the quasi-official wine of summer. We can deliver the package to you for free within a reasonable distance. 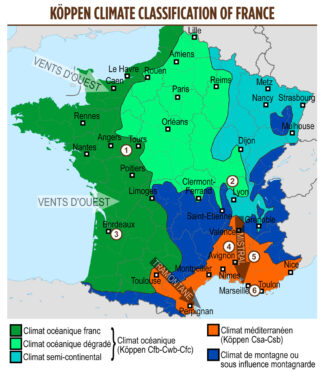 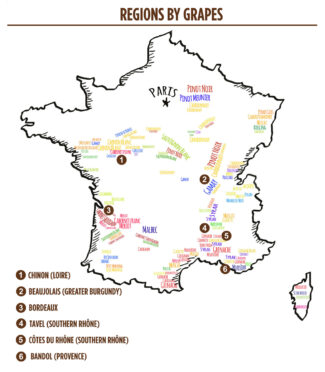 The confluence of the Loire and Vienne rivers is a demarcation where the influence of the Atlantic sweeps through the two valleys. Vineyards are generally oriented on east to west slopes with sunny southern exposures, creating a microclimate ideal for Cabernet Franc. As a result, the medieval town of Chinon—and the appellation that takes its name—is known for rich reds and vibrant pink wines made from that variety. Beyond the climate, Chinon boasts unique soil; tuffeau jaune is a fragile sedimentary rock made of sand and highly porous marine fossils, meaning that it absorbs water rapidly and disseminates it slowly, ideal for grape cultivation. 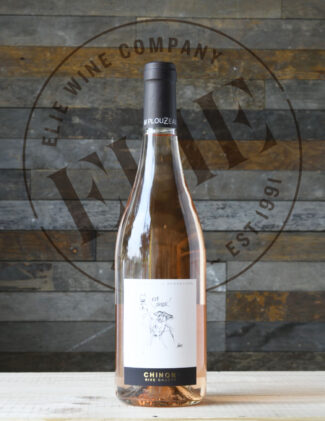 Respect for tradition and love of family are the twin forces that animate Château de la Bonnelière: In 1976, Pierre Plouzeau bought the old family castle and renovated the property while replanting the largely-vanished vineyards. His son Marc took over in 1999 and has become one of Chinon’s most prolific and talented personalities, responsible for a plethora of marvelous juice—red, white and pink. 43 acres of vines and a 1500-square-meter cellar carved out of the castle’s solid stone foundation provide an environment as beautiful as it is fecund. Château de la Bonnelière ‘M Plouzeau – Rive Gauche’, 2020 Chinon Rosé ($17) is a sensationally complex rosé from Cabernet Franc showing notes of limestone, tart cranberry, red currants, raspberry, pomegranate and pink grapefruit.

Interest in Beaujolais rosé has skyrocketed of late; so much so that the output has increased by 34% in the past four years alone and now approaches two million bottles annually. Rosé is produced exclusively in the Beaujolais and Beaujolais Villages AOPs, with 450 of the region’s 3000 estates offering the style. Like its red wines, Beaujolais rosé is made entirely from Gamay—the difference is that bunches destined to be blush are often macerated only for a few hours before pressing, and the choice of conducting malolactic fermentation is left to the vintner based on the style and profile he is after in any given vintage. 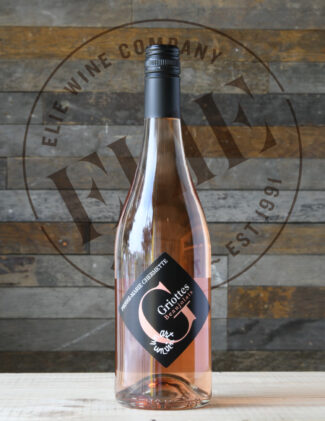 The irony of Beaujolais is that it tends to be a wine best consumed in its youth, while the soils to produce it have required 320 million years to evolve. The Vissoux family falls in between that timeline, having established itself in the village of Saint-Vérand in the 17th century. Today, from 15 acres of vines, Pierre-Marie, Martine and Jean-Etienne craft white, rosé and red Beaujolais from crus such as Brouilly, Fleurie, Moulin-à-Vent, Saint-Amour, as well as Crémant de Bourgogne and hand-crafted fruit liqueurs. Chermette Vissoux ‘Griottes’, 2020 Beaujolais Rosé ($18)owes its elegance to soils that are Saint-Vérand specific, consisting of plagio-granite similar to the blue stones of the Côte de Py in Morgon and may be found as far away as Norway. The wine itself is peach-pink, offering the bouquet of fresh spring flowers with sweet Muscat note with spicy star anise on the finish.

Wine is art and wine is poetry, but wine is also marketing, and the relative scarcity of rosé from Bordeaux—France’s hub for massive and structured red wines—is economics. Dark, big-shouldered Cabernets and Merlots command higher prices and have been relatively easy sales, and for the most part, historically lightweight ‘clairet’ wines were bled from vines still too young to make the powerhouse wines expected of a château. Over the past twenty years, however, in keeping with consumer trends, many Bordeaux producers have rethought their approach to rosé, and have begun to produce a style lighter and fruitier than clairet with an eye to attracting a younger market.

‘Act fast’ are odd words to sum up the history of Haut-Brion, where vignerons have patiently worked vineyards for centuries, and whose wines often take decades to mature. But those succinct two words were uttered by American banker Clarence Dillon in 1935 when told via telegram that the Premier Grand Cru Classé estate of Haut-Brion could be purchased, but only if his accountants acted fast. They did. Clarendelle, 2020 Bordeaux Rosé ($21) (whose label reads ‘Inspiré par Haut-Brion’) takes it cues from the clairet-style of Bordeaux’s bygone era, and a blend of Merlot, Cabernet Sauvignon, and Cabernet Franc juice briefly macerated, then drawn off to preserve the freshness of newly picked grapes. The wine has the delicate hue of rose petals and presents hints of tangy redcurrants and raspberries alongside rounder notes of ripe grapefruit and lychee in a mineral-driven package.

To say ‘Tavel rosé’ is to repeat yourself since, by law, all wine from Tavel is rosé. Creeping along the right bank of the Rhône River in the Gard, the soils of Tavel are a potpourri of small stones called galets roulés, fine sand and fractured limestone, and the hot, dry climate allows the grapes (predominantly Grenache, Syrah and Clairette) to achieve full phenolic ripeness.  As a result, Tavel rosé tends to be richer and more deeply colored than the salmon-pink wines from other regions, with an associated complexity of flavor in the glass. 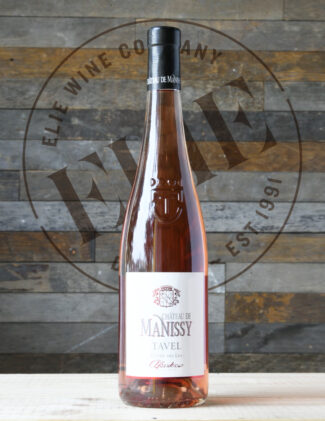 The estate (which has belonged to the Congregation of Missionary Fathers of the Holy Family since the 18th century) operates under the motto, ‘Auspice clara Manissy Stella’, or, ‘beneath the protection of the bright star of Manissy.’ Since 2004, it has also operated under the auspices of Florian André, whose winemaking and cellar skills have upheld the Château’s reputation for Tête de Cuvée barrel-aged rosé. Château de Manissy, 2020 Tavel Rosé ($18) is 60% Grenache, 30% Clairette, 10% Syrah from vines that average 45 years old grown in clay, river rock and fine-grained sand. It opens with aromas of white flowers and spring strawberries, filling out in a silky blend of watermelon and pomegranate; it is rich in minerality and intriguingly peppery on the finish.

Among the best value rosés in a category already saturated with bargains are the blush wines of the Côtes du Rhône. The offerings cover the spectrum of colors delineated in the Provençal color chart, pale pink to rich raspberry, with a palate that tends toward the full-bodied and exceptionally fruity. Novices have been known to ask if rosé is simply a blend of red and white grapes, and in the case of Côtes du Rhône rosé, up to 20% of the cuvée may be composed of white varieties. For the red grapes, Grenache is the ringleader, with Cinsault, Mourvèdre and Syrah used as supplements and each adding their unique spin to the final profile. For whites, Grenache blanc, Clairette and to a lesser extent, Marsanne may show up. 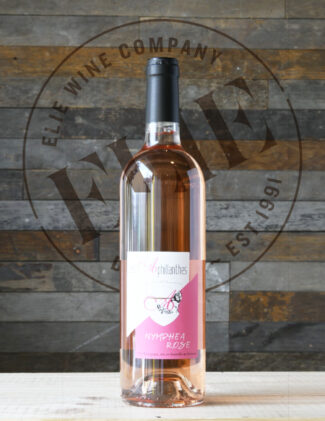 Daniel and Hélène Boulle first took over Domaine Les Aphillanthes in 1987, although Daniel was the fourth generation of his family to work this land; at the time of the purchase, the estate covered about 25 acres. Since then, the Boulles have tripled the size of their vineyards (located near Gigondas), gone organic, and are so committed to quality that they hold yields well below the local allowance and will not produce in vintages that do not live up to their expectations. Domaine Les Aphillanthes ‘Nymphea’, 2020 Côtes du Rhône Rosé ($15) is grown on clay and limestone soil, and bottled without fining. The cuvée is primarily Grenache and Cinsault shored up by smaller quantities of Mourvèdre and Counoise; it is fleshy and dry, showing red currant, orange zest and a nice spicy lift.

One of the key appellations in Provence, Bandol received official AOC status in 1941, but has been recognized as a source of rosé wine for far longer: Dumas’ immortal Count of Monte Cristo sipped a glass of Bandol pink ‘bien frais’—well-chilled. The region encompasses almost 4000 acres, a third of which is dedicated to rosé made from a blend (like the reds) dominated by Mourvèdre, Grenache and Cinsault. Located on a stretch of Mediterranean coastline, the vines enjoy warm (often hot) growing conditions moderated by cool wind from the sea and protected from cold northerly winds by the Montagne Sainte-Victoire and the Massif de la Sainte-Baume ranges. 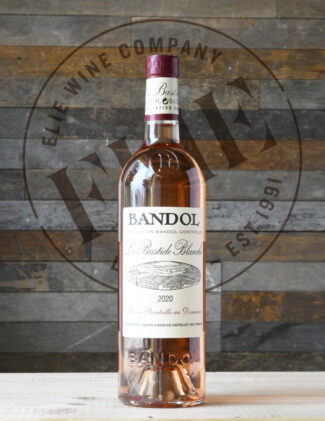 When, in 1970, Michel and Louis Bronzo purchased La Bastide Blanche, they had a lofty goal: To produce a Bandol wine that would rival Châteauneuf-du-Pape. Their patience paid off in 1993 when a banner vintage put both their domain and Bandol on the world’s wine map. The estate is noted for the high percentage of Mourvèdre used in cuvées—up to 75% for their reds and rosés—while yields of all varieties are kept very low. Domaine La Bastide Blanche, 2020 Bandol Rosé ($27) is delightful summer gem that includes some Grenache and Cinsault behind the Mourvèdre, and is unbeatable as an accompaniment to the local Provençal cuisine. It presents cinnamon, mulled spice, redcurrants and cassis; the acidity is well integrated against the fruit tannins, with a steely mineral edge on the finish.