We are pleased to offer a selection of wines that represent a marriage of grapes and ground that the French regard as mystical. It’s in the sandy clay soils over granite of Beaujolais that the Gamay grape finds its truest expression, in the right hands producing red wines that are fresh, vivid, light and fruity, yet possessing a soulful depth and sense of place. It is a wine that is somehow simultaneously uncomplicated and consequential. 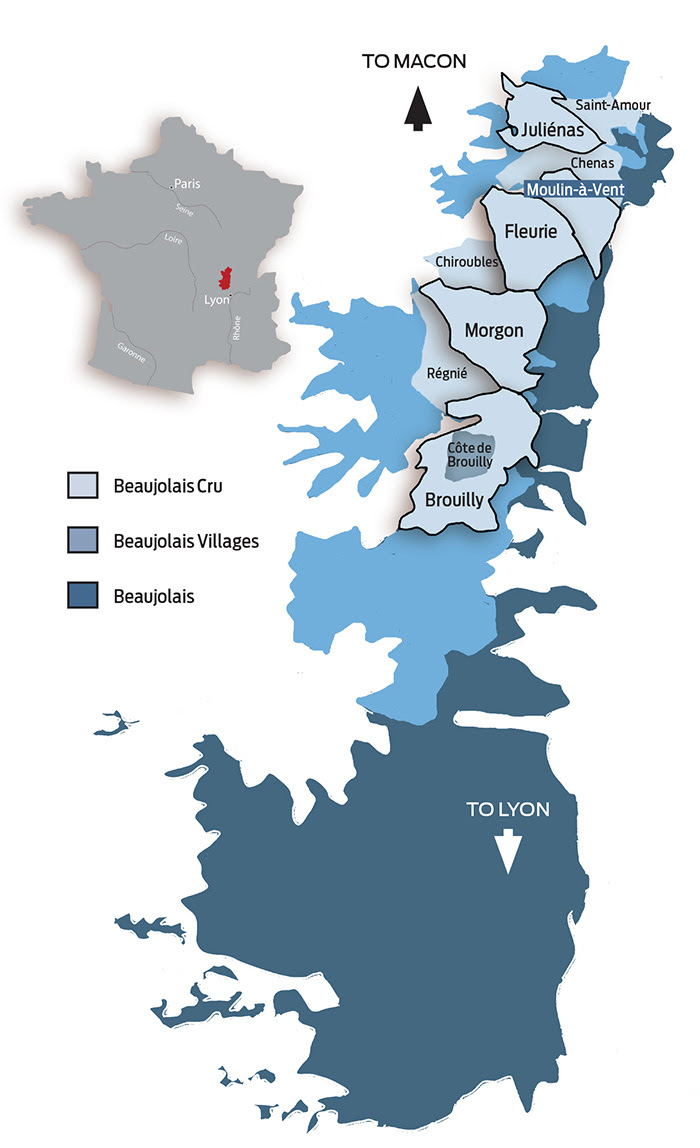 Included in the package are wines from eight of Beaujolais’ ten Cru appellations — known for their extraordinary soils and microclimates and the capability of producing the most remarkable wines of the region. Although these are all Gamay-based wines, they are produced using many of the traditional methods practiced in Burgundy, including a focus on healthy vineyard ecosystems with the goal of making wines that express their terroir.

Light, refreshing, with moderate alcohol, lively acidity, and served with a slight chill, these are wines versatile enough to complement nearly any dish. Indeed, France’s gastronomical center, the city of Lyon, is just a short drive south of Beaujolais on the A6. From Mediterranean Provence to Alscace and Lorraine, many different culinary influences have converged to become what is known as Lyonnaise cuisine. The locals love their Beaujolais with cheeses and cured sausages, potatoes pan-fried in butter, and Coq au Vin. You will too.

Included in Burgundy’s Alter Ego 10-Bottle Package are one each of the following wines:

The price includes a 15% discount, tax, and delivery. We will also honor a 10% discount on any bottles you might wish to add to the package.

Although Beaujolais-Villages is considered “lesser” when compared to the 10 Crus, it can be a source of great value when the wines are made by accomplished producers. And they don’t get much more accomplished than the two we have to offer here.

A living legend in Beaujolais, Jean Foillard is a traditionalist who has returned to the old practices of viticulture and vinification: starting with old vines, never using synthetic herbicides or pesticides, harvesting late, rigorously sorting to remove all but the healthiest grapes, adding minimal doses of sulfur dioxide or none at all, and refusing both chaptalization and filtration. Jean Foillard 2019 (Regular $29) Beaujolais-Villages consists of a blend of several granite terroirs on the outskirts of the cru villages, mostly high in the hills where Gamay once failed to ripen consistently. With today’s climate, ripening is no longer a concern, even in these cooler sites. Consider this wine a lighter, brighter, higher-toned sibling to the domaine’s benchmark Morgon.

Cousin to Vicomte Liger-Belair of La Romanée fame, in 2001 Thibault Liger-Belair took over storied family property in Nuits-Saint-Georges. In 2008, Thibault decided to deploy his talent and knowledge in Beaujolais. Thibault Liger-Belair “Les Jeunes Pousses” 2017 (Regular $31) is Thibault’s basic cuvée, made with fruit from the granite soils of the northern part of the region. It begins powerfully fragrant with violets and dark cherries. Although easy to drink, as Beaujolais-Villages ought to be, there is a vein of iron-metallic energy at the wine’s core leading all the way to a finish of crunchy ripe tannins. This is a Beaujolais-Villages with the gravitas of the Côte de Nuits.

Chénas produces a tender wine that can age surprisingly well. You don’t see much Chénas in your local wine shops as very few good examples are imported to the states. One exception is Domaine Pascal Aufranc “en Rémont, Vignes de 1939” 2018 (Regular $20). Planted in 1939, the “en Rémont” vineyard is one of Chenas’ finest, with classic granitic soils covered in sand. The vineyard is completely isolated, surrounded by fields and woods, which allows Pascal to cultivate his vines without potential interference from his neighbors. This old-vine fruit makes an intense, mineral-accented wine with dark berry aromas mingled with violets and wet earth. In the mouth it is sappy, precise, and lengthy.

Chiroubles’ position is unique, as it is at the very highest altitudes of Beaujolais and the fruit takes about a week longer to ripen than elsewhere, which tends to produce wines of complexity, even in their youth. A pioneer in the under-valued appellation of Chiroubles, Damien Coquelet started his own Domaine at the tender age of 20. He also has some fantastic parcels in the famous Côte de Py in Morgon. Damien Coquelet “Vieilles Vignes” 2016 (Regular $35) is from vines over 50 years old growing in granite soils. The wine sees long semi-carbonic macerations and maturation in Burgundian barriques. Bright aromas of ripe raspberry, cherry, violet and citrus precede a lively mineral attack with a finish that is sappy, earthy, and long.

Côte de Brouilly sits on the hillsides of Mont Brouilly, a prehistoric volcano that left blue schist stones and volcanic rock along its slopes. The fruit tends to ripen fully even in cool vintages, producing structured and elegant wines. Nicole Chanrion took over the family domaine in 1988. She works all 16 acres entirely by herself, from pruning the vineyards and driving the tractors to winemaking and bottling. She employs the traditional winemaking techniques of the Beaujolais: hand harvesting, whole-cluster fermentation, aging the wines in large oak foudres for at least nine months, and bottling unfiltered. She is affectionately referred to as “La Patronne de la Côte,” or the Boss of la Côte. Domaine de la Voûte des Crozes 2019 (Regular $24) is powerful, with loads of pure fruit character and floral aromas.

With a concentration of good producers and particularly fine terroir, Fleurie is another great source of Cru Beaujolais. Fleur means flower in French, and the wines of Fleurie are quite often characterized by a distinct floral note. Jean-Paul Brun started Terres Dorées in 1979 and is one of the region’s champions of what might be described as traditional Beaujolais. His wines are fermented with natural yeast and he has also always eschewed the relatively modern technique of carbonic maceration in favor of traditional Burgundian vinification. Expressive from start to finish with hints of clove and cherry, Terres Dorées “Grille Midi” 2016 (Regular $31) is from the famous lieu-dit of Grille Midi — a south-facing amphitheater of vines on poor, sandy, decomposed-granite soils over hard granite rock.

Juliénas is another Cru known for its sturdy wines with aging potential. The typical characteristic of Juliénas is deep red cherries, which transform with a few years of bottle age into nuanced flavors that tend towards cassis. Laurent Perrachon et Fils, “Les Vignes Centenaires” (Regular $32) is from a two-acre parcel of century-old vines. It is powerful, sinewy, and packed with sappy fruit. With a nod toward toward Burgundy, seventh-generation winemaker Laurent Perrachon uses indigenous yeasts and a long maceration time to extract the broadest palette of flavors, complexity, and structure. The wines are aged in the estate’s vaulted cellars that were built in 1701.

Thanks chiefly to its granitic soils, the wines of Morgon have great weight and structure. It is also blessed with an extraordinarily range of excellent producers. Daniel Bouland is one of them. He farms about 17 acres of old vines and his wines are notable in their ability to develop over time into wines as expressive as those from villages to the north in Burgundy. All fruit is hand-harvested and vinified with full clusters to extract the full depth of expression. The wines are bottled unfiltered. Daniel Bouland, “Pré Jourdan – Foudre No. 7” Morgon 2019 (Regular $41) is a newly acquired lieu-dit located near Fleurie with 70-year-old vines. The entire batch aged in a five-year-old foudre was purchased by the US importer after the inaugural 2018 vintage, making this wine exclusive to the states.

Moulin-à-Vent is considered the sturdiest, most tannic, and longest-lived among the 10 Crus of Beaujolais. But don’t expect the kind of hairy-teeth tannins you find in highly structured Cabernet Sauvignon-based wine. Moulin-à-Vent wines are still made from Gamay so they’ll never be that tannic. Domaine Diochon “Vieilles Vignes” 2019 (Regular $28) does contain some tannin—it wouldn’t be young Moulin-à-Vent if it didn’t—but it is beautifully integrated, not heavy, with fruit and floral aromas, and ready to drink now if given a little time to breathe. The wine is made from vines planted in 1920, 1950, and the 1960s, so yields are naturally small. Look for a pronounced mineral component from crumbly granite soils.

Saint-Amour is the most northerly Beaujolais Crus, bordering the Mâcon region of southern Burgundy. Saint-Amour can be an intensely red-fruited wine and Pierre-Marie Chermette “Les Champs-Grillés” 2018 (Regular $34) is a fine example. Notes of raspberries, rose petals and cherries lead to a drink that is layered and spicy, with a muscular spine of fine tannins. Strict traditionalists, Pierre-Marie and Martine Chermette were among the first in Beaujolais to use sustainable agricultural practices, shunning the use of chemicals in the vineyard and encouraging as much life in the soil as possible. The wines are made with minimal intervention: wild yeasts, minimal sulphur additions, and no filtering if possible.