Castelrotto is a small hamlet on the hill of San Pietro in Cariano, one of the five towns that constitute Valpolicella, the historical Amarone producing area. It is where Carlo Venturini and his wife Alessandra Zantedeschi, both from winegrowing families, founded the estate of Monte Dall’Ora, named after the hill on which it sits. Known as the “pearl of Verona” this is a charming land of Medieval

villages with the stunning Lake Garda to the west and the Adige river flowing beneath.

When the couple moved in, there was nothing but abandoned 500-year-old terraces barely supported by aged and decaying stone walls overrun by nature. It took some time to rebuild the walls, restore the terraces, and to plant a traditional mix of Valpolicella grape varieties trained in the ancient pergola method. Today these vines are 20 to 25 years old and thriving on limestone-rich clay.

From the very beginning the couple employed organic cultivation techniques and eventually turned to biodynamic viticulture with the aim of producing wines with a pure expression of their terroir. Of course, 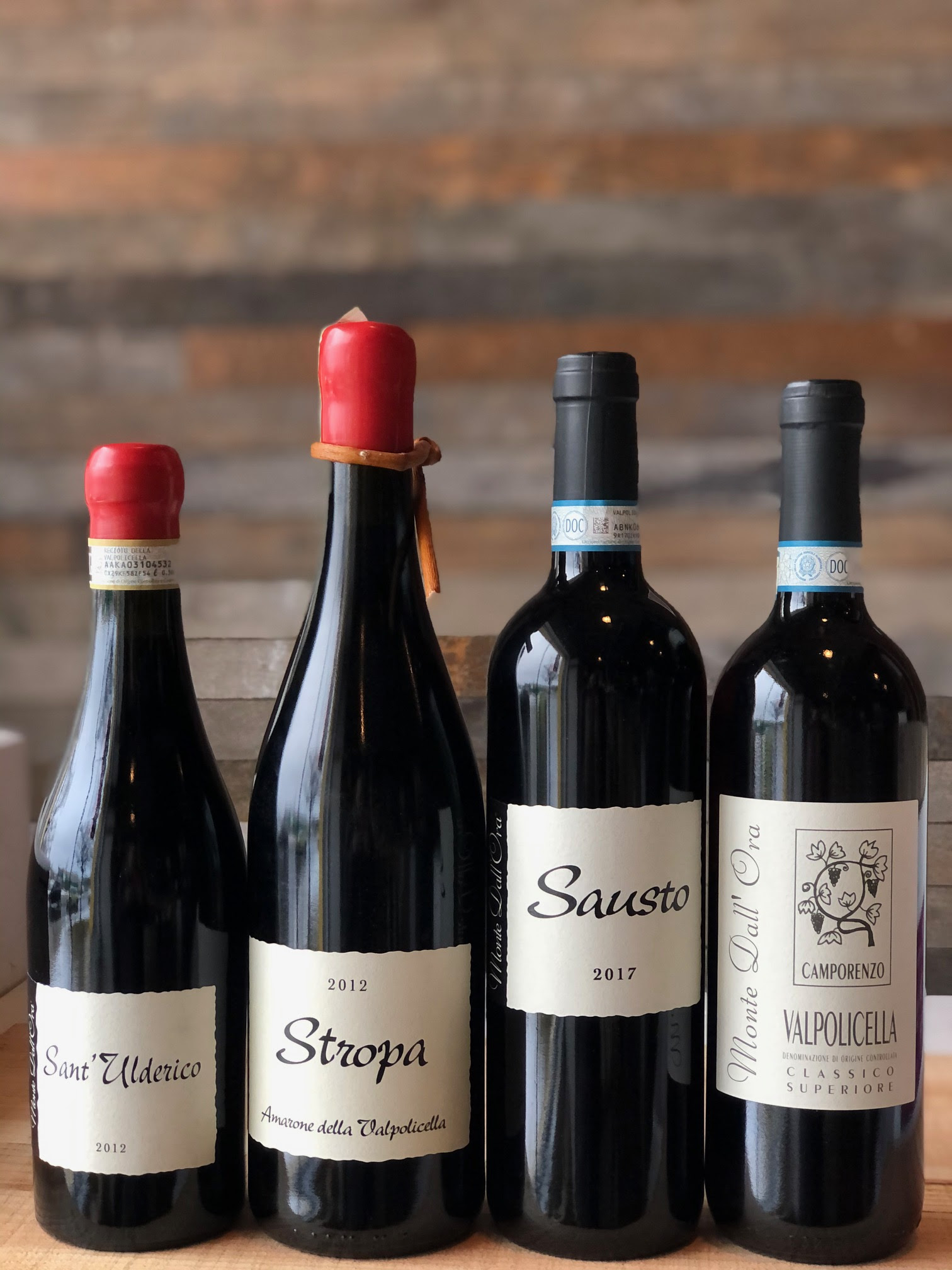 this goal is also helped through hand harvesting and sorting, as well as spontaneous fermentation using only indigenous yeasts. Indeed, Carlo and Alessandra believe firmly that natural yeasts magnify the natural character of the soils.

Biodynamic viticulture is not the norm in Valpolicella, as the humidity of the unique microclimate presents more challenges to viticulture than the drier climates farther south. But the couple trusts centuries of tradition. Up on their warm, sunny, southeast-exposed hill — with vines surrounded by a natural habitat full of wild plants, flowers, and herbs — they have shown that this native environment is capable of producing some of Veneto’s most distinctive and revealing wines.

The price includes tax and delivery, as well as a 10% discount. We will also honor a 10% discount on any bottles you might wish to add to the Wine-Aid package.

A stropa is a switch from the native weeping willow tree, used historically in Valpolicella viticulture to tie vines to pergolas. Monte Dall’Ora has preserved the practice and also named their Amarone after it. You’ll even find a stropa tied around the neck of your wax-capped bottle. The wine is a blend of 50% Corvina, 20% Corvinone, 20% Rondinella, and 10% Molinara and Dindarella, from 25-year-old vines growing in their core estate vineyard. The fruit is picked on the early side of harvest so that it maintains a bright acidity to balance out the richness from three to four months of concentration from drying in single layers in small, slatted, wood boxes. Around 4,500 bottles are produced.

While “Sant’ Ulderico” is a dessert wine, you won’t find it overly sweet and especially not cloying. Monte Dall’Ora chooses to harvest early to maintain proper balance in the fruit to produce a wine that is filled with ripe and jammy plum. It is exceptionally well balanced between sweetness and acidity with a superb structure that would be particularly suitable for pairing with blue cheeses. Like “Stropa,” a selection of the best bunches are placed in small wood crates and left to dry naturally for about four months. The wine is vinified in February and then aged in small French barrels for 36 months. Around 1,500 bottles are produced.

A blend of 40% Corvina, 30% Corvinone, 20% Rondinella, and 10% Oseleta and Molinara. Saustò comes from the same estate vineyard as La Stropa. The fruit is harvested manually in late September to early October and fermented spontaneously with native yeasts and without sulfur. Fermentation takes place in steel and concrete tanks, in many different lots, so that each parcel can be well-tracked. Most of this wine is bottled as an easy-drinking early-release wine, but the best, ripest lots are destined for Saustò. In good vintages the pressings from Monte Dall’Ora’s “Sant’ Ulderico” Recioto are added to the developing wine to add further complexity. The wine is aged in old oak botti for six months and in bottle for eight months. Around 6,000 bottles are produced.

A blend of 50% Corvina, 30% Corvinone, and 20% Rondinella from the Camporenzo vineyard very near the estate. The vines were planted in 2008 and trained on wires in the guyot method to obtain even greater concentration. This plot is the last to be harvested for a wine that is brimming with red-fruit, spice, complexity, and structure. Fermentation takes place with native yeasts and without sulfur in concrete and steel tanks. The wine is aged for about 6 months in tank and then 6 months in old 25-hectoliter oak botti. Around 9,000 bottles are produced.