Introducing The Leonardo da Vinci, a $160 Wine-Aid package that includes six bottles of Italian wine. This small range of wines from stellar producers in north central Italy are just a small sample of the variety available from these ancient lands. The price includes tax and delivery, as well as a deep discount. We will also honor a 10% discount on any bottles you might wish to add to the Wine-Aid package.

Leonardo da Vinci was an Italian painter, draftsman, sculptor, architect, and engineer whose genius, perhaps more than that of any other figure, epitomized the Renaissance humanist ideal. 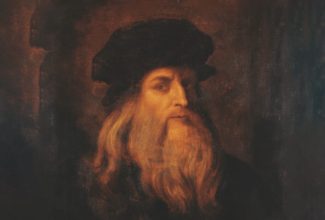 Perhaps a lesser known fact is that da Vinci owned several vineyards in central and northern Italy. His letters to friends, family, and farm managers show that he was an ardent wine taster, producer, and even cultivator.

He was particularly inspired by “the divine juice of the grape” in the late 15th century, when he was painting The Last Supper in Milano. During this period, da Vinci experimented with all parts of the winemaking process, from cultivating his own varietals, to perfecting the grape press, to distilling brandy.

Included in The Leonardo da Vinci Wine-Aid box are two bottles of each:

Ampeleia is an exciting project led by star winemaker Elisabetta Foradori near the Tuscan coast. It seeks to reveal the diversity and potential of Maremma’s Colline Metallifere, a mineral-rich, mountain-hill group mined since Etruscan times that occupies the central-western part of Tuscany, just west of Montalcino. The base of the wine consists of low yields of Cabernet Franc from vines planted in the early 1960s. A grocery cart of heady aromatics include mixed berries, cherry licorice, minty herbs, a touch of chocolate, and a whisper of lavender. A sip is generous with dense fruit that seamlessly merges with a medium-bodied mid-palate and a mineral-rich, lengthy finish.

The green hills of Umbria match neighboring Tuscany in their splendor and are finally catching up with the level of wine quality. This fact is most apparent in the hills of Perugia, and even more specifically the comune of Montefalco. It is there that the native, naturally low-yielding grape variety of Sagrantino reigns. Montefalco Rosso is a blend of 60% Sangiovese, 25% Merlot, and 15% Sagrantino. After vinification, the wine is matured for 12 months in large wooden oak barrels and a further six months in the bottle. It sports an elegant bouquet with scents of cherry and spice. A sip offers bright flavors of red fruits while the finish is quite herbal with polished tannins and good length. It’s a pleasantly complex wine with enough structure to develop for a few more years.

Winemaker Leopardo Felici is a superstar. In its 33rd edition, the chief Italian wine rating publication, Gambero Rosso, has awarded him “Grower of the Year, “ calling him “a true vigneron capable of interpreting every nuance of his land, Castelli di Jesi.” Leopardo is a Verdicchio perfectionist. Soon after taking over his family’s small 25 acre estate in Apiro, the highest of the villages surrounding the town of Jesi, he immediately began transitioning to organic farming to help create the purest wines possible. You won’t find many wines at this price level with this concentration and specificity of place. Drinking at its peak, this wine shows outstanding varietal purity, full of white fruits, hints of brine and almonds, and serious length.