For the past few years, the wines of Domaine Bart have been some of our greatest Burgundy values and the 2016 vintage is no different. It was quite a challenging year for the domaine, where frost reduced yields so much that they were forced to combine parcels just to have a sufficient amount to vinify. But the fruit that matured was good quality with relatively thick skins and a fairly high percentage of “shot berries” — both attributes that make for good concentration and extraction of the Pinot Noir variety. 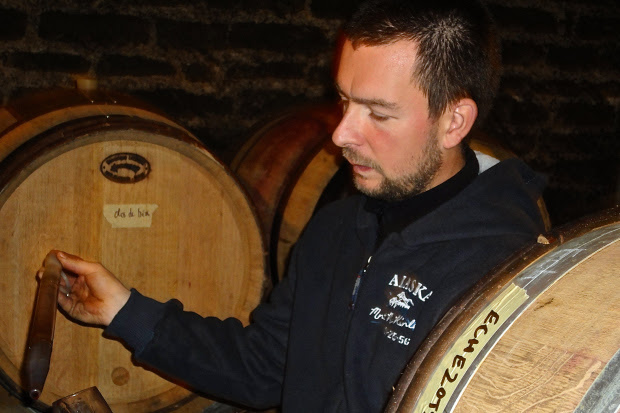 Pierre Bart is the sixth generation at Domaine Bart. Since 2009 he’s been running the 54 acre domaine along with his uncle, Martin. His grandmother comes from the same family as Domaine Bruno Clair, explaining why there are holdings in the Grand Crus of Bonnes-Mares and Chambertin-Clos de Bèze, as well as Santenay. Indeed, a good portion of the estate’s holdings come from the split of the renowned Domaine Claire-Daü between Domaine Bart and Domaine Bruno Clair (even another portion was sold off to Louis Jadot). Prior to the split, Domaine Claire-Daü was one of the most heralded and respected producers in the region, nearly single-handedly bringing the appellation of Marsannay its current status.

Pierre and Martin’s wines are balanced and classic Burgundy, understated with grace and elegance. It begins in the vineyard with sustainable and organic farming practices on every parcel. Each parcel is worked by hand according to its specific microclimate. The use of new oak is judicious and depends on the parcel. According to Pierre, “We make very fruity wines in classic style. The main words at our domaine are fruit and balance, balance between fruit, acidity and tannins. So we don’t produce big extracted wines. We try to respect the fruit.”

These are not merely “fruity” wines. The “goût de terroir” of Côte de Nuits is unmistakable in each and every bottle. Yet, for the most part these are wines for drinking, not stuffing into the corners of a cellar. Pair a few bottles with your best friends and a rich poultry stew.

$36 “Les Echezots” (Marsannay)
The Les Echezots vineyard gets more cool winds from the Hautes-Côtes. Subsequently the grapes ripen later there and it is always the last parcel to be harvested. A wine of concentration and richness.

~$44 “Champs Salomon” (Marsannay)
One of Domaine Bart’s best Marsannay vineyards is located in a prime spot on the mid-slope, producing wines which combine power, elegance, minerality, and longevity.

~$42 Fixin
The fruit is mostly from Le Clos with a small amount from the neighboring parcel of Champs Pennebaut. A sauvage nose of redcurrant and earth precede a supple yet precise concentration.

~$67 “Les Hervelets” (Fixin, Premier Cru)
The fruit is from both Les Arvelets and Les Hervelets. These are the top parcels in Fixin. Dark fruits, hints of earth and spice, and a bit of heft from the more pronounced tannic structure allow this expression longer term aging potential.

$252 Bonnes Mares (Grand Cru)
Domaine Bart’s Bonnes Mares parcels are next to those of Comte de Vogüe. While it is a powerful, long-lived wine, there is an attractive mouthfeel that should permit it to drink well in the shorter term.

$252 Chambertin Clos du Bèze (Grand Cru)
The fruit is from a one acre parcel with vines that were originally planted in 1904. Harmonious, expressive and intense, only a tiny amount is produced.