New Vintage of A Favorite Corbières

We’ve been bringing in young star winemaker Maxime Magnon‘s gorgeous expressions of Corbières from reclaimed old-vine plots in high-altitude vineyards for several years now. A native of the Burgundy region, he studied under some of the most respected winemakers in the Northern Rhône and Beaujolais.

Influenced by the Beaujolais school (cold maceration, whole cluster fermentation, and minimal use of sulfur) Maxime has studiously harnessed this approach to produce wines that not only speak of the land from where they come but also made in a way which emphasizes purity of fruit and immediate drinkability, unique in Corbières where weight and extraction are the norm.

Maxime’s style and philosophy couldn’t be more apparent in the 2016 vintage of “Rozeta,” a field blend of Carignan, Grenache, and Cinsault from vines of 50-60 years in age. A glassful exudes heady aromatics of strawberry jam and pink floral arrangements that rise above subtler scents of fennel frond and dusty earth. A sip is concentrated red fruit on a fine frame of coiled energy that unfolds over the course of a lengthy, mineral finish. Its deft balance will pair with nearly any protein you put against it but it might be ideal with Julia Child’s Roast Chicken. 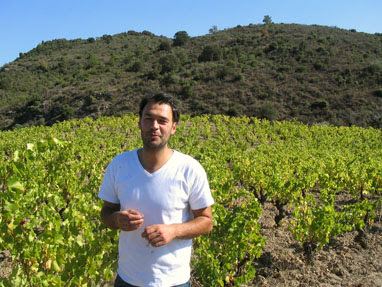 Stylistically Maxime Magnon‘s wines may be quite different than his illustrious friend Didier Barral from the nearby appellation of Faugères but he shares a similar naturalist philosophy with Didier. Maxime cultivates his vines with respect for nature and the soil – although what stands for soil in his vineyards is mostly just pure rock and Mediterranean shrubland. He’s certified organic, but also incorporates biodynamic practices into his vineyard management. A mule and several cattle serve for weed control and fertilization.

Maxime mainly farms in Hautes Corbières, a sub-appellation within A.O.C. Corbières that borders Fitou, and sits at a higher elevation with very rocky terrain. The vines are all trained in the ancient gobelet style. Aging of “Rozeta” is done in second-hand, Burgundian barrels sourced from a producer in Chassagne-Montrachet.

Maxime Magnon’s tête de cuvée “Campagnès” is a single vineyard field blend of about 95% hundred-year-old Carignan vines co-planted with Grenache, Syrah, Grenache Gris, Macabou, and Terret from soils of clay and limestone on a slope above the river Berre. All grapes are co-fermented prior to aging in second-hand, Burgundian barrels sourced from a producer in Chassagne-Montrachet. “Campagnès” is the most concentrated and age-worthy wine in Maxime’s line-up. It will reward the patient drinker for a decade or more when properly stored.