The Gift of Bordeaux

If you’re looking for the perfect gift for the wine lover in your life – even if that wine lover is you – look no further than our Gift Box of 2015 Vintage Château Quintus from the team that produces Château Haut-Brion. Not only does Château Quintus make great wine, they make some pretty attractive wood boxes.

In the summer of 2011, Domaine Clarence Dillon, owners of the renowned estates Château Haut-Brion and Château La Mission Haut-Brion, acquired the historic estate of Château Tertre Daugay in Saint-Émilion and renamed it Château Quintus. Since the mid 1800s, the classic reference work on Bordeaux wines, Cocks & Féret, has mentioned the property and its extraordinary terroir as a “First Growth” of Saint-Émilion.

Fast forward two years later to the autumn of 2013, when Château Quintus acquired the neighboring property, Château L’Arrosée. Today, the two great estates are united in order to produce one of the most exceptional wines in Bordeaux. With recently modernized cellars and the same team that produces Château Haut-Brion and Château La Mission Haut-Brion responsible for making the wines of Château Quintus, this “new” estate is already at the forefront of quality in Saint-Émilion. 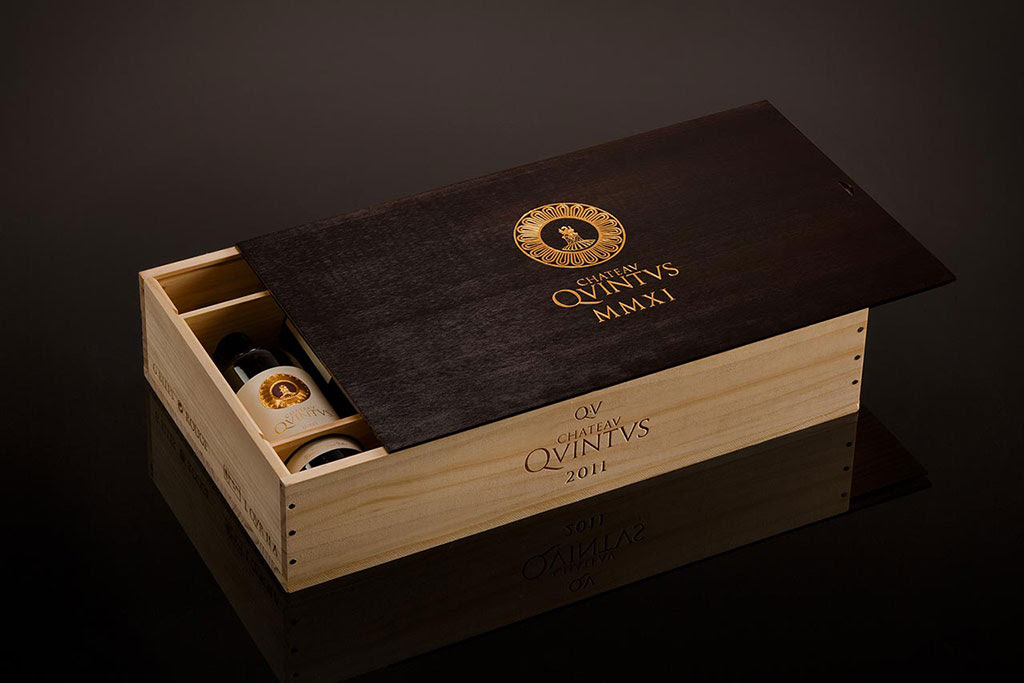 Château Quintus “MMXV” (Saint-Émilion Grand Cru) ONE BOTTLE
The First Wine of Château Quintus is easily one of the top wines in all of Bordeaux. The wine is a blend of 76% Merlot and 24% Cabernet Franc aged in 37% new French oak barrels from the estate’s best parcels. In the warm and dry 2015 vintage, Quintus’ limestone soils were prime real estate, with the soils acting like a fine-pored sponge slowly releasing water reserves and regulating the vines throughout the season. With a 94+ rating from Robert Parker’s Wine Advocate the wine delivers an expected potency on the palate with rich dark fruits balanced by ideal acidity and ripe, supple tannins. The Quintus bottle was modeled after an ancient bottle of Haut-Brion that was recently discovered from an old pirate’s lair.

Château Quintus ˝Le Dragon de Quintus˝ (Saint-Émilion Grand Cru) TWO BOTTLES
˝Le Dragon de Quintus˝ is the Second Wine from Château Quintus. Not merely leftovers, Second Wines have always offered incredible value, but as the selection process for the First Wine or “Grand Vin” of these distinguished estates has gotten stricter, today the best Second Wines offer an even greater value than in the past. ˝Le Dragon” is a blend of 76% Merlot, 23% Cabernet Franc, and 1% Cabernet Sauvignon aged in 33% new French oak barrels. Very low yields produce a wine of richness and intensity.

According to the producers of Château Quintus, 2015 was an epic vintage: “A long heat wave and dry period allowed to achieve excellent flowering conditions until the arrival, in August, of miraculous rains.This rain enabled the vines to maintain the necessary water reserves and to provide requisite nourishment for perfect ripeness. The harvest began in September under a clear blue sky. Thanks to this ideal weather, we were able to wait for optimum ripeness for each grape variety. All the conditions are there to allow 2015 to join the greatest vintages of Bordeaux.”

Stock up on an Inexpensive but Tasty Bordeaux for the Holidays

2015 Château Peyrabon is a wine that has all the sophistication of a classic Bordeaux without the sophisticated price. A blend of around half Cabernet Sauvignon with the remainder split between Merlot and Cabernet Franc, the wine is laden with scents of blackberry, raspberry, and cold wet stone. A medium-bodied palate with tensile tannin and a fine freshness makes this a versatile red for all of your holiday events. And with a reasonable alcohol level, it will satisfy the Bordeaux urge without becoming tiresome.

Château Peyrabon is a Cru Bourgeois property owned by Patrick Bernard, who is related to Olivier Bernard of Domaine de Chevalier. It is somewhat of an unusual estate due to having vineyards in both Pauillac and Haut Médoc. Since its purchase in 1998, Peyrabon has both increased in size and improved in quality. Some of the improvements include the replanting of vines, a new drainage system, and modernization of the cellars. The result is a Bordeaux estate that is now a Cru Bourgeois standard.