Happy New Year! Stop by the shop for all your bubbly needs. We have sparkling wines from France, Spain, and Italy starting at $15.

As usual, we’ll have our elaborate selection of small-production sparkling wines, and grower Champagnes from Grand and Premier Cru vineyards. These are the work of passionate small producers and individual growers who are deeply connected to the particularities of each of their vine parcels and believe that wine is made in the vineyard first. They craft wines that express terroir by rigorous work in the vineyards, picking fruit at its peak, and employing minimal intervention in the cellar.

This year we went deep into the cellars of Champagne Tarlant to feature nearly their entire lineup of available Champagne and we even have a handful of their still wines (Coteaux Champenois). 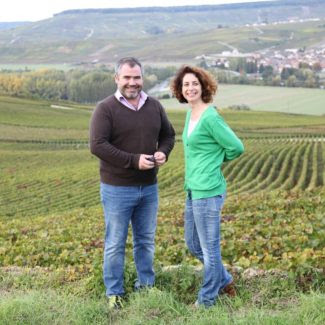 The Tarlant family has tended vines in the Vallée de la Marne since 1687. They began producing their own wine in the 1870s. Such a long and rich history has allowed Benoît Tarlant, the latest family member to head the estate, to continue their reign as one of the region’s most distinguished growers. Benoît’s sister, Mélanie, works the business and marketing side of the operation.

Benoît’s ultimate goal is to make zero-dosage Champagne by means of harvesting his fruit when it reaches its “prettiest” maturity — full of flavor with the acidity in balance. But he is not an absolutist. He will adjust his philosophy when the wines call for it, although it is rare for him to produce a wine that receives more than 6g/L dosage (just a hair over Extra Brut).

Based in the village of Oeuilly, the estate totals 34 acres spread across 57 parcels, each vinified separately. The vines average around 30 years old. Benoit embraces the diversity of his many plots but finds it a challenge to cultivate so many distinct sites using one strict technique. Subsequently, he employs a range of methods depending on the site. Some parcels are managed with biodynamic techniques, some organic, and some with Benoît’s form of “herbal therapy,” where various beneficial herbs are planted among the vines.

“Zero” is one of Champagne’s best Brut Nature wines. There are decades of effort in perfecting the cuvée as Benoît’s father, Georges, has been making it since the early 1980s, long before it became trendy. The blend is roughly equal proportions of Pinot Noir, Chardonnay, and Pinot Meunier. Ripe fruit based on the 2010 harvest, several vintages of reserve wine, and six years aging on the lees combine to produce a wine of beautiful depth. Layers of ripe yellow plum, peach, and citrus precede a honey-toasted richness. Disgorged February 2018.

These half-size bottles are based on the 2012 harvest, several vintages of reserve wine, and four years aging on the lees. Disgorged November 2017, half bottles of this quality are rare.

A blend of 50% Chardonnay, 44% Pinot Noir, and 6% Pinot Meunier. “Zero” rosé is typically composed of 80% base vintage (currently 2013) with 20% barrel-aged reserve wine. The fruit is from estate parcels in four villages (Oeuilly, Boursault, St-Agnan, and Celles-lès-Condé) in the Vallée de la Marne. This bottling was disgorged in September 2018 and received no dosage. An inviting red berry and floral character reaches the nose before a sip offers notable richness, quite rare for a non-dosé Champagne.

The long maturation of the fruit in the 2004 vintage contributed to an intense aromatic expression and a superb balance to this wine, an almost aerial sensation — hence the name of the cuvée, L’Aérienne. The blend is 70% Chardonnay and 30% Pinot Noir from the lieux-dits L’Enclume, Les Marguiniers, Les Forgeottes, and Pierre de Bellevue, consisting of chalk and both friable and hard limestone. It was fermented with natural yeasts and aged in barrel before bottling in May 2005. Disgorgement was performed in 2017 and the wine was finished with zero dosage. The rosé version of this cuvée was disgorged in March of 2018.

Cuvée Louis is named for Benoît’s great-great grandfather Louis, who was the first to bottle the family’s estate wines in 1928. The fruit is from the Tarlant’s original and chalkiest vineyard Les Crayons, named for the high chalk (craie) content of its soils. A blend of Chardonnay and Pinot Noir from vines with an average age of 65 years, this is a radiant and monumental Champagne. The bottle spent 14 years with lees and was disgorged in March 2018 and finished with zero dosage.

A “Blanc des Noirs” 100% Pinot Meunier from a single parcel called Pierre de Bellevue planted in 1947 by the Tarlants’ paternal grandfather. The particular clay-limestone soils there are specific to the Marne Valley and particularly suited for Pinot Meunier. The bottle spent 11 years with lees and was disgorged in October 2015 and finished with zero dosage. Miniscule yields resulted in a ripe and lively wine, with loads of peach and plum fruit balanced with plenty of the tension that is characteristic of the vintage.

“BAM!” is produced from the far less common varieties of Pinot Blanc, Arbanne, Petit Meslier. The vines grow in limestone, sand, and silica-based soils of the Four à Chaux – les Sables lieu-dit in the Tarlant’s home village of Oeuilly. This bottling is a 2009 base (50%) plus 2007 & 2008 (50%). It was fermented with natural yeasts and aged in barrel before bottling in May 2010. Disgorgement was performed in April 2016 and the wine was finished with zero dosage. The result is a wine of great texture and harmony.

A “Blanc des Noirs” 100% Pinot Noir from a single parcel of vines called Mocque Tonneau planted in 1972 on a steep, chalky hillside in Celles-lès-Condé. The bottle spent 10 years with lees and was disgorged in October 2014 and finished with zero dosage. This is a rich and powerful Champagne, filled with ripe fruit and spices blanketing a fine core. Full-bodied and complex with impressive length, its name befits its regal character.

“La Vigne d’Antan” (The Vines of Yesteryear) is 100% Chardonnay from a single, ungrafted vineyard on sandy soils in Oeuilly. After nine months of aging in fourth-use oak barrels, the wine rested in bottle for over 11 years before disgorgement in May of 2014. Even after nearly two decades, there is still plenty of youthful lemon and apple fruit to go along with the mature layers of honey and brioche. Its flavor intensity is as equally profound as its resonant personality. This is a one of a kind Champagne.