Gevrey-Chambertin is one of the most recognized appellations in Burgundy for good reason. At the commune level, these can be immensely satisfying Pinot Noir-based wines, substantial, dark-hued, infused with assertive fruit and heady aromatics. The distinction of Gevrey-Chambertin becomes unmistakable in the Premier Cru and Grand Cru vineyards. There you find the muscularity and structure that sets this appellation apart from all others. 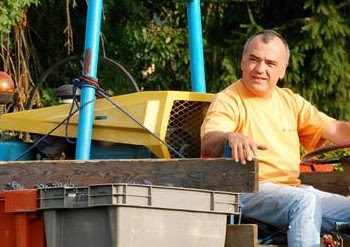 Fourth-generation winemaker Dominique Gallois took over the family vineyards from his father in 1989. The small domaine is around 10 acres, the bulk of which is centered in Gevrey-Chambertin. The Gallois cellars were constructed by Dominique’s great grandfather, Guillaume Bizot, in 1901. They are reputed to be some of the coldest in the region, which helps to create wines of great depth and longevity.

Cultivation and winemaking are aimed at producing wines that are pure and speak of their unique terroir. In the vineyards, the domain has adapted a lutte raisonée (reasoned struggle) approach that includes plowing to force the roots deep and minimal use of herbicides or pesticides. Harvesting and sorting are all done by hand. In the cellar, only indigenous yeasts transform the fruit into wine. The wines are aged in oak barrels from the Allier region, with care to ensure that the portion of new oak, which varies depending on the vineyard parcels, does not dominate the wine’s aromas.

2016 was no parade for producers in Burgundy. A frost blanket and recurring mildew plagued growers throughout the season. Despite these issues, the Côte d’Or has once again provided an outstanding, classic vintage featuring some hauntingly beautiful red wines.

A true taste of the appellation, the wine is a blend from 10 climats situated around the village of Gevrey-Chambertin including En Songe, En Jouise, En Billard, En Dérée, Croix des Champs, Sylvie, La Justice, Charreux, and two parcels of the clos surrounding the Gallois home. Average age of vines from these parcels is around fifty years. 800 cases annual production.

One of Gallois’ most sought after offerings, the “La Combe Aux Moines” Premier Cru vineyard is comprised of shallow clay-limestone on slabs of rock, with very little topsoil. The vines, planted in 1954, are on steep slopes at around 1,000 feet in elevation that are ideally exposed to morning sunshine. Yields from this parcel are naturally low and the ideal climat helps ripen the fruit to perfection. 200 cases annual production.

Seriously old vines planted in 1910 from a climat that produces some of the most powerful and elegant expressions of Pinot Noir on earth. Gallois’ tiny 0.7 acre parcel is near the border of the Grand Cru Griotte-Chambertin and Dominique claims this wine has all of “the elegance of Charmes, the power of Chambertin and the roundness of Griotte.” These are vineyards composed of thin and poor clay-limestone soils that are littered with small stones, marls, and iron. It’s a landscape where Pinot Noir vines thrive. 133 cases annual production.

Ask us about our selection of previous vintages (2005-2015) from Domaine Dominique Gallois.