Although the island of Corsica is France’s most southerly vineyard area, it is surprisingly not its hottest. Elevation and wind modify the realities of latitude, demonstrated by the remarkable freshness of the best of Corsica’s white wines, and the almost Burgundian grace of its best reds. With a rediscovery of indigenous grape varieties and a focus on quality production, Corsica is one of the most exciting wine regions in France right now.

Easily one of the top producers in Corsica, Jean-Charles Abbatucci creates majestic and fiercely unique wines from the granitic western coast of Corsica. He has created a pristine poly-culture ecosystem on his estate south of Ajaccio that includes groves of olive trees on ancient terraces, and large swaths of untouched forests. Jean-Charles believes in following even the most offbeat biodynamic practices to the letter. He goes so far as to drive a tractor around his vineyards, playing traditional Corsican polyphonic songs over loudspeakers to the 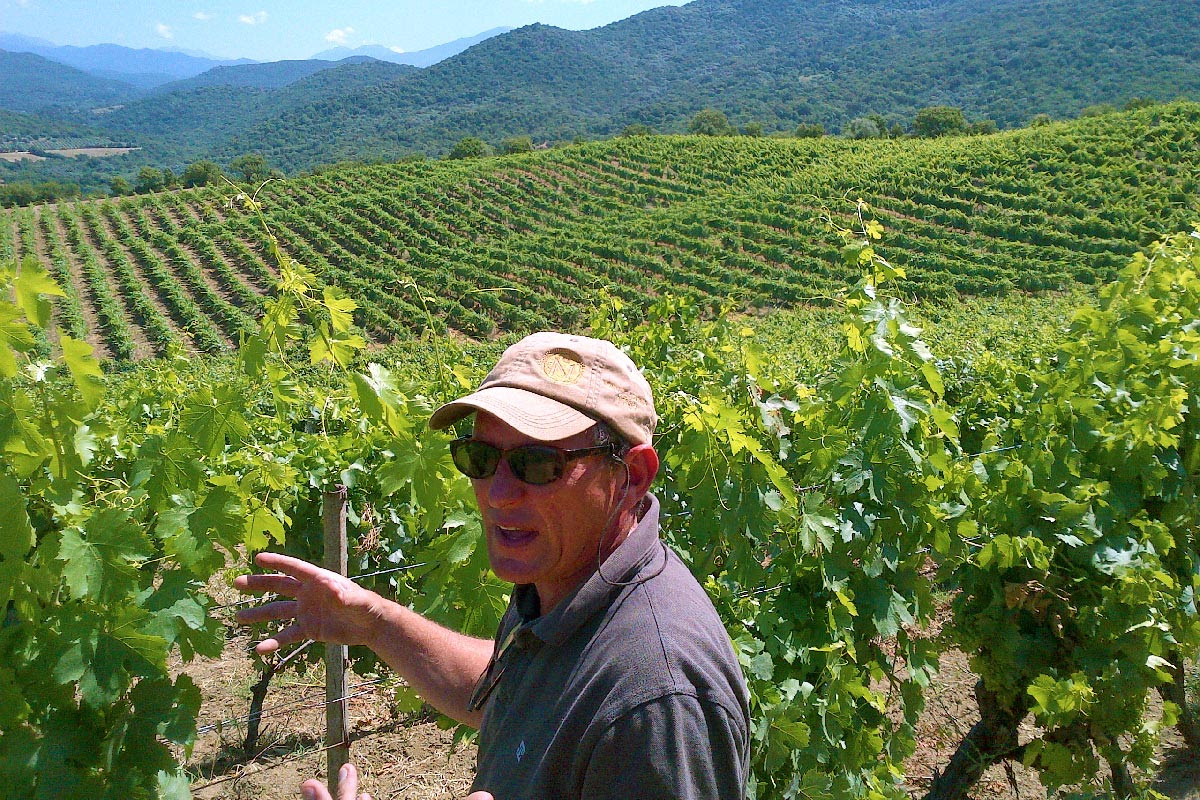 vines and the herds of sheep foraging through them.

Located in southern Corsica, in the heart of the Taravo Valley, and at an altitude of about 300 feet, many of the estate’s vines come from cuttings of indigenous varieties sourced decades ago by his father (then President of the Chamber of Agriculture of Corsica) from peasant farmsteads in the mountainous and remote interior of the island.

Jean-Charles is so dedicated to the idea of returning to the culture of traditional Corsican vines that he has completely eschewed the appellation system and currently bottles all of his wines under the Vin de France label. In a recent interview, he says, “At first I didn’t leave completely, I just began the Cuvée Collection of old varieties and bottled them as Vin de France. But five years ago I decided the system was just too restrictive, too limited. We are in a time where agriculture is disappearing and we need to support the traditions that make us who we are.”

Indeed, Jean-Charles’ wines express not only a balanced ripeness of fruit, but also the aromas of Corsican maquis — particularly camphor notes of myrtle and the multi-layered, sexy scents of immortelle (sometimes called the curry plant for its intoxicating aromatics).

All prices based on the purchase of a 6-pack (mix and match).

The blend is predominately Sciaccarellu with a healthy portion of Niellucciu. The 2017 vintage includes 10% Carcajolu-Neru due to low yields of Sciaccarellu. The fruit is hand-harvested and sorted in the vineyard and cellar. Vinification takes place in concrete and stainless steel vats and the wine is aged on fine lees six months before bottling. The result is a highly aromatic, lighter red wine ideal for summer drinking. If you don’t spend all of your time inhaling the gorgeous scents emanating from the glass, you’ll get mouthfuls of generous ripe fruit balanced by a lively spine of lengthy minerality.

Ministre Impérial is a blend of Sciaccarellu, Niellucciu, Carcajolu-Neru, Montanaccia, Morescono, Morescola, and Aleatico. The grapes are crushed by foot and macerate for 15 days before aging in older 600 liter demi-muids for 12 months and then stainless steel tank before bottling. From a glass of Ministre Impérial rise aromas of ripe cherries on hot gravel, pear skins, and dusty fruit orchards. Although medium in weight there is a concentration of fruit that travels along a wave of persistent minerality and it all expands throughout the bottle until the last sip when you are not only basking in the beauty of this wine but the beauty of wine itself. This cuvée was named after Jacques-Pierre-Charles Abbatucci, a leading military figure under Napoléon Bonaparte’s Premier Empire.

Général de la Révolution is a blend of Carcajolu Biancu, Paga Debbiti, Riminese, Rossola Brandica, Biancone, and Vermentinu, all vinified in 600 liter demi-muids and 1,200 liter foudre. Maturation occurs on gross lees for nine months, then in vats for two months after assembly of the best batches. Its powerful and persistent nose opens with notes of fresh white fruits and citrus. On the palate, freshness and acidity are balanced by a deep richness. This cuvée was named after Jean-Charles Abbatucci, a military hero of the French Revolution of 1789, who became a Brigadier General at age 25 and was killed that same year on the battlefield. His name is engraved as an “Officer of the Empire” on the Arc de Triomphe in Paris.

Diplomate d’Empire is a blend of Vermentinu, Rossola Bianca, Biancu Gentile, Genovese, and Brustiano, all vinified in 600 Liter demi-muids. Maturation occurs on gross lees for nine months, then in vats for two months after assembly of the best batches. The nose reveals ripe yellow and exotic fruits with heady scents of the maquis. A natural freshness is expressed as power and length. This cuvée was named after Il Calvalière-Don Jacques-Pascal Abbatucci, a childhood friend of Napoléon Bonaparte, who served under the Empire and spent several years as a diplomat in Naples.