The Côte Vermeille (vermillion coast) is a 13 mile long stretch of beaches, small bays, creeks, and coves nested along the coastline of southern France on the border of Catalunya. This bequiling land is where the Massif des Albères, the eastern extremity of the Pyrenees, tumbles into the blue waters of the Mediterranean. The massif’s red rock gives the region its name, and the schist composition of the rock is one of the elements that endow the region’s wines with their earthy, mineral frame, forcing the vine roots deep into the earth to seek moisture and nutrients.

The seaside towns of Collioure and Banyuls-sur-Mer are situated within the small footprint of the Côte Vermeille. Both are centers of the region’s wine production with terraced vineyards carved into the foothills rising up behind them. This is no easy place to be a wine producer. Most of the vineyards are cut into steep slopes and are organized by stone walls and drainage canals that surround them and help to resist erosion. At Domaine La Tour Vieille, tending and harvesting the vines is done by hand both as a tradition and by necessity.

Another major factor in the Côte Vermeille is La Tramontagne, a cold, dry wind that blows in from the northwest, accelerating as it funnels between the Pyrenees and the Massif Central. This relentless wind not only ensures naturally low yields, but also keeps the grapes free of mildew. Because of the dry, sunny summers, most of the domaine’s vines are pruned in a “gobelet” shape that helps provide shade to the fruit.

With all these native challenges, exceptional producers like Domaine La Tour Vieille both persist and excel at producing wines that speak of place. The estate was founded in 1982 in Collioure by Vincent Cantié. Vincent came from a family of anchovy merchants and during the off-season his father had the boathands work to terrace the family vineyards, but winemaking was a secondary pursuit. That is until Vincent decided to devote his life to the study and production of wine. A few years later, Christine Campadieu, herself from a winemaking family in Banyuls, joined him on the adventure.

Today, the couple work alongside a small team to elaborate some of the region’s premier wines. All wines are fermented traditionally with wild yeasts. Production is small and focused on a range of traditional wine, including dry “rancio” wines – a nod to the heritage of Catalan gastronomy, culture, and way of life in the Côte Vermeille.

Open a bottle of Domaine La Tour Vieille and watch this well-made 55 minute documentary that chronicles a growing season with the couple. Although filmed over the 1999 vintage, not much has changed at the winery in regards to how they approach the challenges of winemaking in a beautiful but savage land. 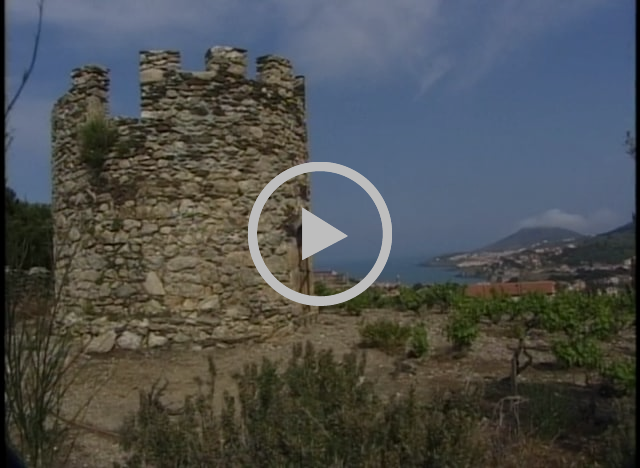 Discount prices based on the purchase of a 6-pack (mix-and-match).

“Les Canadells” is a blend of 40% Grenache Gris, 30% Grenache Blanc,10% Macabeu, 10% Roussanne, and 10% Vermentino from vines 20 to 60 years old. Fermentation is achieved in stainless steel tank for 70% of the blend. The other 30% ferments in oak at low temperature and with regular stirring of the lees. Aging takes place for roughly six months in tank or barrel. Heady aromatics of honey and exotic citrus introduce a sip full of warmth and ripeness balanced by a lengthy minerality. Only 660 cases are produced.

“Puig Oriol” is composed of a blend of 70% Syrah, 25% Grenache Noir, and 5% Carignan. The vines range from 25 to 50 years old. A long five weeks of maceration precedes 10 to 18 months of aging before bottling. Ripe berry fruit and Mediterranean herbs are followed by sun-soaked earth on the nose. The sunniness follows on the palate with loads of ripe fruit held in check by that lengthy minerality again. It’s a feat of balance that is not easily achieved in such a climate as Collioure. Only 350 cases are produced.

“Rimage Mise Tardive” is 100% Grenache Noir from vines over 45 years old. This is a classic vin doux naturel. The wine is fortified with a neutral spirit to stop the yeast before fermentation is complete and all sugars have been converted into alcohol. The wine retains some naturally occurring sugar, perceived as sweetness on the palate. This particular cuvée sees extended aging in oak foudre for 15 months prior to bottling. A similar aromatic vibe as the “Puig Oriol” with a touch of fruit leather and cherry candy. The residual sugar gives the wine a sense of weight but does not make it syrupy. A glassful cries out for a bit of quality chocolate. Only 410 cases are produced.

40% Syrah, 30% Grenache Noir, and 30% Grenache Gris from vines 20 to 60 years old. The Grenache undergoes a direct press after being cooled. The Syrah sees a short maceration of a half day at low temperature before pressing to extract body and colour. Fermentation and aging are achieved in tank to maintain freshness and fruit aromas. An easy drinking wine with just enough complexity to keep it interesting. Only 580 cases are produced.

Mémoire d’automnes is an oxidative wine. A small amount of must is taken from the white Banyuls and alcoholic fermentation is allowed to complete. The wine is then put aside for élevage d’abandon “abandonment aging” in half-filled oak barrels. The large contact area between air and wine allows each barrel to develop its own flor. This slow oxidation lasts five or six years during which the wine develops a complex bouquet similar to the wines of Jerez. 500ml bottle.

90% Grenache Noir and 10% Carignan. The wine is fermented dry and then stored in half-filled barrels that induce oxidation. After many years of aging in barrels the wine is transferred to large oak foudre which is also only half-full. The foudre is considered a “perpetual barrel” and the wine removed during bottling is limited to what can be replaced from another barrel. It acquires a “rancio” character notable for its walnut aromatics. Cap de Creus is named after the cape jutting out into the Mediterranean sea just below the Côte Vermeille near the Catalunyan town of Cadaqués.

A special cuvée made in homage to the winemakers’ grandparents “who knew how to create wines in perfect harmony with their cultural heritage.” The wine is produced from many vintages of old vine Grenache Noir and Carignan that has been matured by the solera method with the originating vintage going all the way back to 1952. The process produces a wine of exceptional richness with aromas of dry fruits, wax, and nuts. 500ml bottle.