Bold & Balanced Red from an Emerging Sub-zone in the Languedoc

One of the most exciting wine regions in France right now is Terrasses du Larzac. Newly minted with appellation status in 2014, the area is distinguished for its unique climate that benefits from both the warm Mediterranean sea and the cool air that blows down from the Larzac plateau on summer nights, creating wines that are fresh, yet delicate, with silky tannins, and the earthy garrigue aromas characteristic of the Languedoc. It is a region that can be described as something like a marriage of the ripeness of Southern Rhône with the energy of Northern Rhône all wrapped in an herbal vibe all its own.

Situated to the northwest of Montpellier, and symbolized by Mount Baudile which peaks at 2,800 feet, the Terrasses du Larzac has one of the highest concentrations of ambitious producers in the south of France. This is partially due to the unique climate conditions but also the vast range of soil types in a small area. Indeed, one might travel through vineyards composed of schist, sand, horizontal layers of red ruffes, clay/limestone, and galets roulés in the course of a few miles. 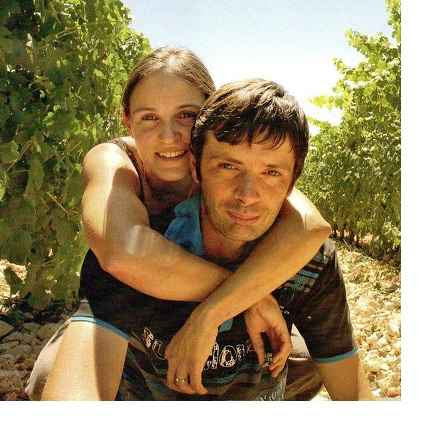 The best producers know precisely which vines will produce the highest quality fruit depending on the specific soil type, exposure, and altitude of the plot, resulting in some of the most profound wines in the world.

There are few better examples of this type of laser-focused winemaker in the Terrasses du Larzac than Vincent Guizard of Domaine Saint Sylvestre. Together with his wife Sophie, Vincent is cultivating less than 20 acres of prime vineyards set in the wooded hillsides above the enchanting village of Puéchabon and surrounding the 12th century church of Saint Sylvestre after which the domaine’s name is taken. Nearby are some of the biggest names in the Languedoc: Domaine de La Grange des Pères, Domaine d’Aupilhac, Mas de Daumas Gassac, and Domaine de Montcalmès.

Indeed, after cutting his teeth working with the renowned Olivier Jullien at Mas Jullien in Montpeyroux, Vincent was part owner of Domaine de Montcalmès, producing world-class wines with some of the fruit from Vincent’s own vineyards.

In 2010 Vincent decided to break away from Montcalmès, taking 17 acres of vines with him, and creating Domaine Saint-Sylvestre with its first vintage release in 2011.

Vincent and Sophie employ a sustainable approach to viticulture, along the lines of “lutte raisonnée” (the reasoned struggle) and use no synthetic fertilizers or herbicides in the vineyards. Fermentation is completed using only indigenous wild yeasts. Domaine Saint Sylvestre Terrasses du Larzac Red is a blend of 70% Syrah, 20% Grenache, and 10% Mourvedre aged for two years in used French oak barrels from Burgundy before blending and bottling without fining or filtering. It exudes an intoxicating nose of blackberry, garrigue, raw red meat, violets, and a curl of wood smoke. A sip explodes with flavor, sappy and warm, filled with complex fruit and balanced by a lengthy streak of minerality. It’s truly a beautiful wine capable of standing up to the richest of holiday meals but a few tucked away in the cellar will also reward a patient drinker for years to come.