The Mâconnais region of southern Burgundy is white wine country and the Chardonnay variety is particularly at home on these limestone slopes with just a bit more warmth than the Côte d’Or. 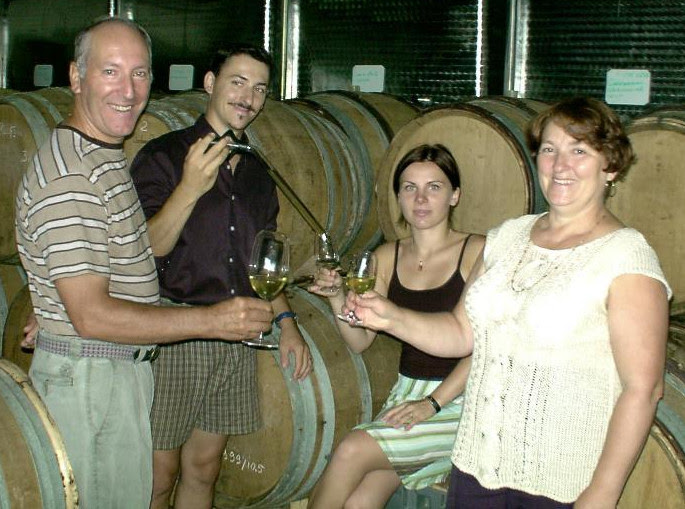 One of the top producers in the region, third generation winemaker Jean-Marie Chaland, owns a little over 20 acres of vineyards mostly planted with vines aged 50 to 100 years old in and around Viré-Clessé. With organic certification since 2006, fermentation with indigenous yeast, and only the top cuvées maturing in a tiny proportion of new oak barrels, Jean-Marie’s wines are pure, complex, and expressing all of the fleshiness of this unique subzone.

The composite of two top communes in the Mâconnais, Viré-Clessé was recognized in the late 1990s with appellation status for its superior quality Chardonnay-based wines. What makes Viré-Clessé so special is a combination of chalky clay soil over limestone as well as hillside vineyards with favorable exposition to the sun. In the right hands the result are wines plump with fruit yet balanced by a streak of minerality. At their best, they are as close to a properly matured Côte de Beaune white you can get for a fraction of the price and without spending years in a cellar.

The wines of Jean-Marie Chaland are fresh, well-balanced, and joyful. From the easy drinking Mâcon-Villages to the complex single-vineyard, old-vine Viré-Clessé to the elegantly sparkling Crémant, Jean-Marie’s wines all offer heady aromatics and typicity of place.

The holidays are closing in fast and the crowd-pleasing, food-friendly wines of Jean-Marie Chaland are an ideal addition to any gathering.

The Wines of Jean-Marie Chaland

~$33 Domaine Sainte Barbe “ Perle de Roche” (Crémant de Bourgogne Brut Nature) SPARKLING
From a parcel of 45 year old vines on a shallow limestone slab in the commune of Viré. The bottles are cellared for two to three years before disgorgement. No dosage is added. The wine is only produced once every two years for a total of about 3,200 bottles.

~$22 Domaine Sainte Barbe “Les Tilles” (Mâcon-Villages 2016)
From a 3.75 acre plot of vines planted in the late 1960s situated on the silty, clay-limestone plateau of Montbellet. It is fermented with indigenous yeast and matured on fine lees for eight months in stainless steel tanks. 3,000 bottles produced.

~$32 Domaine Sainte Barbe “L’Epinet” (Viré-Clessé 2016)
From a 1.75 acre plot planted in 1940 on a southeast facing hilltop in the commune of Clessé. Fermentation and aging on lees in barrels for one year (with only one new barrel added per year). 4,500 bottles produced.

~$38 Domaine Sainte Barbe “Thurissey” (Viré-Clessé 2016)
From a gently sloping, southeast facing 1.3 acre plot of 95+ year old vines in the northern zone of Viré-Clessé. Fermentation and aging on lees in barrels for one year (with only one new barrel added per year). 2,000 bottles produced.