Raül Bobet has a long list of achievements: He has a masters degree in chemical engineering and a doctorate in oenology. He has 18 years of experience at Bodegas Torres, Spain’s largest producer of DO wines under its own label, where he served as chief oenologist. He is currently proprietor and chief oenologist at both Castell d’Encús in Costers del Segre and Ferrer Bobet in Priorat. There is no question that Raül Bobet knows how to make wine. 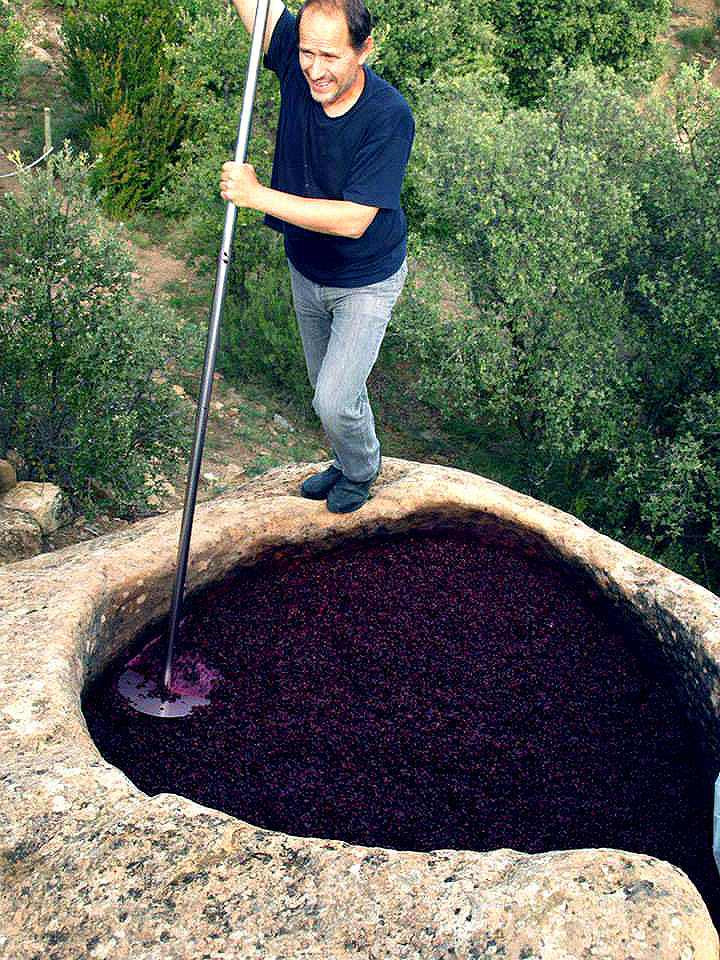 But Raül Bobet doesn’t merely make wine. With a Zen-like belief in the unity of art and science, he makes world-class, soulful wines with massive aromatics, wines that express a purity of fruit and concentrated intensity balanced by fresh acidity and elegance. He believes that by growing and vinifying international grape varieties he can take that work and that knowledge that has been accumulated through time and build upon them in a way that offers insight into the particulars of his own terroir.

The vineyards of Castell d’Encús lie in the northeast Spanish DO of Costers del Segre, at the high altitude sub-zone of Pallars Jussà around 3,000 feet in the sub-Pyrenees. Raül believes that this corner of Costers del Segre has the ideal climate for producing the type of wines that he wants to make. Wines with “…freshness, wines which can last, wines that aren’t explosive, more reflexive, with a more feminine and sensitive feel and less alcohol.” Raül discovered his property of overgrown terraces that provided the ideal conditions to suit his vision. He soon learned that this piece of land had once been cultivated by Hospitalier monks between the 12th and 18th centuries for the purpose of making wine. A further revelation was the existence of many old fermentation pools (lagares) that were carved out of stone centuries ago. He rehabilitated seven of these lagares and uses them today.

Raül likes to say that Castell d’Encús is less a winery and more of an experimental project. However you define it, it’s an estate as dynamic and exciting as you’ll find from any winemaking region in the world.

The name “Taleia” comes from the Catalan word for obsessive commitment. Combining organic farming and ultra-modern vinification alongside the most ancient techniques, Taleia was intended to be something like a French Sancerre or Pouilly-Fumé. It is produced from vines planted on chalky soils that fermented with natural yeasts in a combination of new French oak barrels, stainless steel, and stone lagares. A blend of Sauvignon Blanc with a little Semillon, the wine is simultaneously rich and crisp with heady aromatics of ripe white fruits, blossoming orchards and sun-baked stone. The mouth-coating finish is everlasting. 1,830 cases produced. (92+ Points Robert Parker’s Wine Advocate)

“Acusp” was named after a higher altitude hill within the estate where Pinot Noir was planted. 100% Pinot Noir, this wine is considered one of Spain’s best wines produced with this difficult to grow varietal. The wine is partially fermented in stone lagares and then raised in new French oak barrels. “Acusp” has a powerfully elegant structure similar to that of a Grand Cru Burgundy. Intensely aromatic of cherry licorice, pressed flowers, and sweet earth, there is a Côte de Nuits vibe to the nose while the cool, mountainous climate of Castell d’Encús comes through on the palate. It drinks like a champ presently but clearly has a long life ahead. 841 cases produced. (93 Points Robert Parker’s Wine Advocate)

Thalarn is named after the village where Castell d’Encús is located. Comprised of 100% Syrah this is one of the most expressive wines for the varietal in all of Spain, and can be favorably compared to wines from the top appellations of Northern Rhône. “Thalarn” was fermented in stone lagares, oak vats and stainless steel tanks and then raised in new French oak barrels. A glass is jam-packed with aromas of wild dark berries, fresh fennel, cool slate, and just the slightest finishing hint of smoked meat. A sip is intense, ultra-concentrated, simultaneously rich and wiry with abundant yet polished tannins that call out for a plate of lamb chops. 1,298 cases produced. (93 Points Robert Parker’s Wine Advocate)

“Quest” is a Bordeaux blend of predominantly Cabernet Sauvignon along with Cabernet Franc, Petit Verdot and Merlot. The wine was fermented exclusively in stone lagares and raised in new French oak barrels for 18 months. While displaying its Bordeaux foundation the essence of “Quest” is clearly mountainous with some touches of Atlantic breeze. The unrestrained aromatics are predominantly herbs and spice over mixed berries. While easily the most full-bodied of the bunch, “Quest” clearly illustrates the aim toward balance that Raül Bobet seeks with a subtle elegance, refined tannins, and remarkable length. This wine is worthy of aging or pairing with the finest cuts of beef. 1,580 cases produced. (94 Points Robert Parker’s Wine Advocate)