Classic Barolo from the Outstanding 2010 Vintage

Barolo is a perfect marriage between a grape and a place. Indeed, the Nebbiolo variety – named after the fogs or “nebbia” that are normal during its late October harvest – thrives only in certain places, most notably in Italy’s Piedmont region around the town of Alba and through the hills known as Langhe where Barolo is king. By most accounts, 2010 was an outstanding year for Barolo and that is clearly reflected in Fantino’s “Riserva” with its dense fruit, silky tannins, and long finish.

60+ year old vines are fermented for 30-35 days in stainless steel tank and then aged in large oak barrels for five years and then bottle for 12 months before release. Eight years after this grand vintage the wine is at a point where it is already marvelously expressive with electrifying aromas of rose petals and black cherry over hints of licorice and marzipan. The ethereal brick red color belies a mouthful of concentrated fruit that leads to a mid palate of deeply polished tannins that exit with an epic mineral flourish. Drink it now and over the next 15 years.

For a large part of his career, Alessandro Fantino was part owner and made the wines for the renowned Cantina Bartolo Mascarello. In 1998 he sold his portion of the winery to Bartolo’s daughter Maria-Teresa and dedicated himself to helping his brother run their family estate full-time. 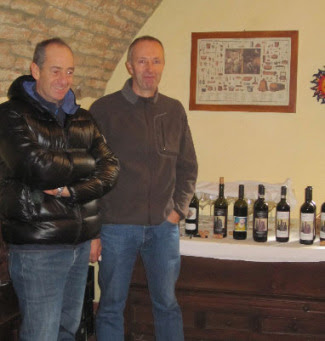 Now both Alessandro and Gian Natale Fantino are creating superb wines out of their tiny, garage-sized winery in the old town center of Monforte d’Alba. They own a scant 20 acres exclusively on the hillside of “Dardi” with perfect southeastern exposure in the heart of the historic Bussia cru, one of Barolo’s most renowned areas for producing wines of finesse and longevity.

Allesandro honed his craft over the 18 years he worked with Bartolo Mascarello and still holds on to much of what he learned from the old master. Like long, uncomplicated fermentations followed by extended aging in large, neutral barrels in which the wines are allowed to mature and soften.

Alessandro is on a quest for fragrance and elegance over power yet this may be the sappiest Barbera d’Alba under $20 that is locally available. It shows high tones of perky flowers and low tones of macerated red fruit. A sip is a balance of ripe and juicy, with a lengthy finish that shows its real estate pedigree. This is a wine that clearly states its from the Piedmont.

The wine is produced from 60+ year old vines that grow on the same hillsides as the Nebbiolo vines that make up their Barolo. The fruit is always hand-harvested and then hand-sorted at the winery prior to fermentation with native yeasts. It then ages 18 months in stainless steel and another 3 months in bottle prior to release.

The Fantino brothers are specialists with Barolo Chinato, a traditional Piemontese wine used as a digestif that is disappearing from production. Barolo wine is first aged in large oak barrels for 4 years. It is then fortified and blended with the family’s recipe of spices: China Calissaio, Bergamotto, Arancio, Mandrino, Vanilia, Cannella, Genziana, Chiudi di Garofano, Cardomomo, Assenzio (absinthe), and more. After blending the wine is aged in stainless steel tanks for 6 months and bottle for 3 months before release. Expect a deliciously aromatized Barolo, fascinating and complex with a long, herbal finish.