Modern Rioja’s storied history began in the mid-1800s when local winemakers adopted the methods of Bordeaux and began aging their wines in wooden casks. Since then, the region has tended to spotlight the amount of time the wine spent in oak barrels, effectively putting a supporting actor in the leading role. But as Nobel Prize winning poet Bob Dylan often says, the times they are a-changin’. In June of 2017 The Consejo Regulador in Rioja announced the introduction of a “Singular Vineyard” designation to be known as Viñedos Singulares. Soon the quality of Rioja wine can be linked to a specific terroir. 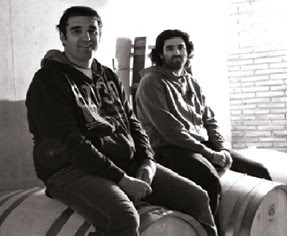 In practice, these “Singular Vineyards” are nothing new for brothers Arturo and Kike de Miguel Blanco, third generation viticulturalists that produce wine for Artuke Bodegas y Viñedos. These two young men have completely refocused the family winery to cultivate small vineyard plots in and around their village of Abalos in the high elevation foothills of the Cantabrian Mountains. Yet they currently have no plans to adopt the new labeling to their own wines, believing that the laws were thrown together too hastily, without enough study of the soils and history of the land.

Although the brothers are already working somewhat outside the established regulations of Rioja, their wines clearly reveal the characteristics of the Alavesa sub-zone, the northernmost and smallest of the three Rioja sub-zones, where the cooling influence of the Atlantic Ocean meets the warmer interior. This unique climate has the effect of ripening Tempranillo grapes with slightly thinner skins, yielding wines with superb fruit and freshness.

Arturo and Kike’s grandfather was regarded as crazy (loco) for purchasing this single vineyard located on a high terrace around 1,600 feet in elevation overlooking the Ebro river in Baños de Ebro. The plot consists of nearly 40-year-old vines growing in a sandy, gritty soil over a chalky limestone subsoil. A blend of 80% Tempranillo and 20% Graciano that is aged for 13 months in both 500 and 3500 liter French oak barrels, this wine shows it’s Atlantic climate mainly on the palate as ripe red fruit immediately turns crunchy to lead into a lengthy mineral finish. Aromatically complex, a noseful is rewarded with plums, minty herbs, dark chocolate, baked earth, and cherry blossoms. You could do worse things than pairing “Finca de los Locos” with some fatty red lamb chops.

From a single plot of sandy soil with a substrata of sandstone planted in 1920. The Blanco family purchased this nearly abandoned vineyard in 2012 and began to tend the majority of Tempranillo along with around 20% of other grapes, both red and white, including Graciano and Calagrano. All grapes are harvested and fermented together, and then matured in a 600-liter oak barrel for 14 months. The result is a wine that is concentrated and silky and brimming with a potpourri of heady aromatics.

“Artuke” is made with the carbonic maceration method, a wine-making technique used to enhance aromatics and produce light, fresh, fruity wines preferred by Basques in the northern sub-zone of Alavesa. It is a blend of mainly Tempranillo grapes, fermented and aged in cement and stainless steel. Candied red berries follow behind a burst of violets and cinnamon on the nose. There is minimal tannic structure which allows this red wine to take a relatively deep chill and also makes it quite a versatile pairing with food: tuna, pretty much anything made with zucchini, fried chicken, gooey cheese sandwiches, pizza, etc…

A blend of 90% Tempranillo and 10% Graciano from vines as old as 95 years, Pies Negros means Black Feet, a reference to the archaic method of crushing the grapes using one’s feet – a technique that the brothers are determined to use to this day, as they believe the gentle crushing helps to maintain the purity of the fruit. After fermentation, the wine is aged for 14 months in a combination of new and older 225 liter oak barrels, resulting in a wine that’s full of mature, dark red fruits and a touch of spice with a firm finish.