Stretching from Fixin at its southern end to the city of Dijon at its northern end, Marsannay vineyards are on the famous Côte that continues north from Gevrey-Chambertin. Although Marsannay has no Premier Cru designated vineyards there are a handful of lieux-dits on a shortlist, “Les Longeroies” and “Clos du Roy” prime among them, for this status upgrade once the French wine governing authority catches up with the the level of excellence coming out of these vineyards. For now, we can revel in the relative affordability of single vineyard Marsannay wines. 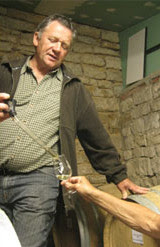 Only a few producers in the Côte d’Or’s northernmost zone of Marsannay have gained international attention for the quality, specificity, and ambitiousness of their wines. Régis Bouvier is regularly mentioned among them. He has a lengthy track record of both consistency and value in this appellation that is quickly growing in prestige.

Régis owns nearly 25 acres of vineyards, mostly in Marsannay, with a few prime parcels in Morey-Saint-Denis and Gevrey-Chambertin. He vinifies all three colors – red, white, and rosé, but the red wines are his crowning achievement, managing to be simultaneously bold and refined, with aromatics to spare. This is all the result of managed yields and high quality terroirs.

The 2015 red Burgundies are beginning to arrive and many of the pundits are claiming it as an epic vintage for red wine. Time will tell but we couldn’t be more pleased with the overall quality of this vintage so far. These are wines of ample ripeness with a core of juicy acidity and serious reserves of ripe tannins hidden behind their generous fruit.

It’s not impossible to find a value red Burgundy. But it’s not exactly simple either. At Elie Wine Co. we spend many an hour studying the landscape of wine regions and producers for the purpose of bringing in the highest quality and most specific wines for the best prices. It’s a point of pride for us. It’s also the reason why we’ve been selling the wines of Régis Bouvier for many years. They just keep delivering.

All prices are based on purchase of six or more of the featured bottles.

Régis Bouvier From the Cellar

$99/bottle “En la Rue de Vergy” (Morey-Saint-Denis, 1995)
This is a prime example of a village Burgundy with the developed mushroom, cherry leather, and forest floor tertiary aromas and flavors that the region is known for. We have a handful of bottles remaining and all have been in our possession since release.