We’re taking a couple weeks off from our epic 2014 Bordeaux tasting adventures to feature a few wines appropriate for patios and 4th of July parties.

In a marriage of grapes and ground that the French regard as mystical, it’s in the sandy clay soils over granite of Beaujolais that the Gamay grape finds its truest expression, in the right hands producing red wines that are fresh, vivid, light and fruity, yet possessing a soulful depth and sense of place. It is a wine that is somehow simultaneously uncomplicated and consequential. 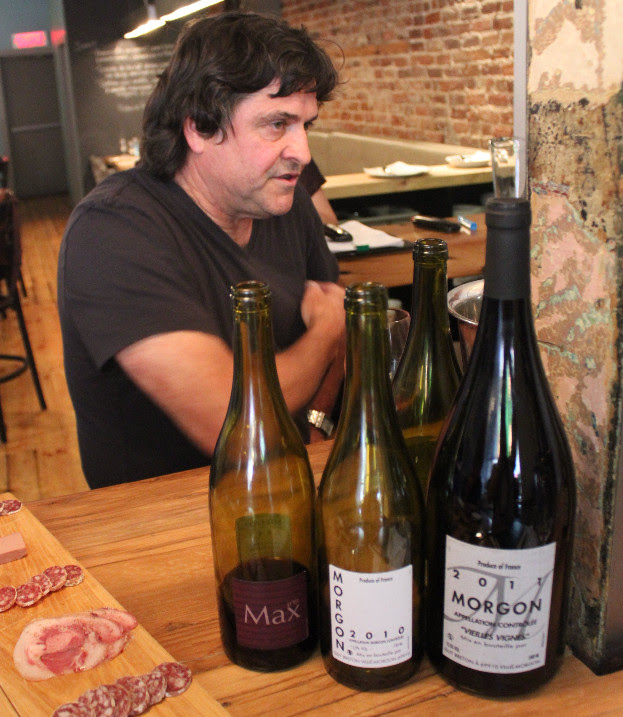 Guy Breton makes his wines as a reflection of his character – honest, affable, and down-to-earth. He took over the tiny family domaine of just over seven acres from his grandfather in 1986. Until that point, they were selling their fruit to the large cooperative wineries which dominated the region. Following the example of traditionalist Jules Chauvet, Guy Breton returned to the old practices of viticulture and vinification: never using synthetic herbicides or pesticides, harvesting late, rigorously sorting to remove all but the healthiest grapes, adding minimal doses of sulfur dioxide or none at all, and refusing both chaptalization and filtration. He produces a scant 3,000 cases annually.

All prices are based on the purchase of six or more bottles.

Guy Breton’s principal wine, the Morgon “Vieilles Vignes” is sourced from 2.5 acres of 80 year old vines in the Saint Joseph and Grand Cras subzones of the appellation, which give fine, stony wines. A high-lying sandy parcel contributes more complexity, structure, and acidity to the blend. After fermentation, the wine is aged on fine lees in Burgundian barrels (of at least the third passage).

Guy Breton’s Régnié is sourced from the hills between the Côte de Brouilly and the Côte du Py of Morgon, around the village of Régnié-Durette. Guy’s grandfather handed down the two parcels that go into this wine: one with 100-year-old and the other with 35-year-old vines. The shallow soil of sand and decomposing stones gives the vines easy access to the bedrock, creating firm wines with more grip and acidity than in Morgon.

The benchmark domaine in the Côte de Brouilly. The Geoffray family has been farming their steep, south-facing slopes of decomposed pink granite for over a century. The fruit for Château Thivin Beaujolais Villages Rosé is sourced from a 2.5 acre plot of 50 year old vines. It is produced by direct pressing the grapes and allowing the skins to macerate with the juice for one day before vinification in cool, temperature-controlled stainless-steel cuves. The result is a rosé with delicate fresh fruit aromas and juicy flavors ideal for pairing with light summer al fresco meals. A crowd-pleaser for certain, this is always one of our top selling rosé wines.