Thrilling Barbera from A Rising Star in Piedmont Italy 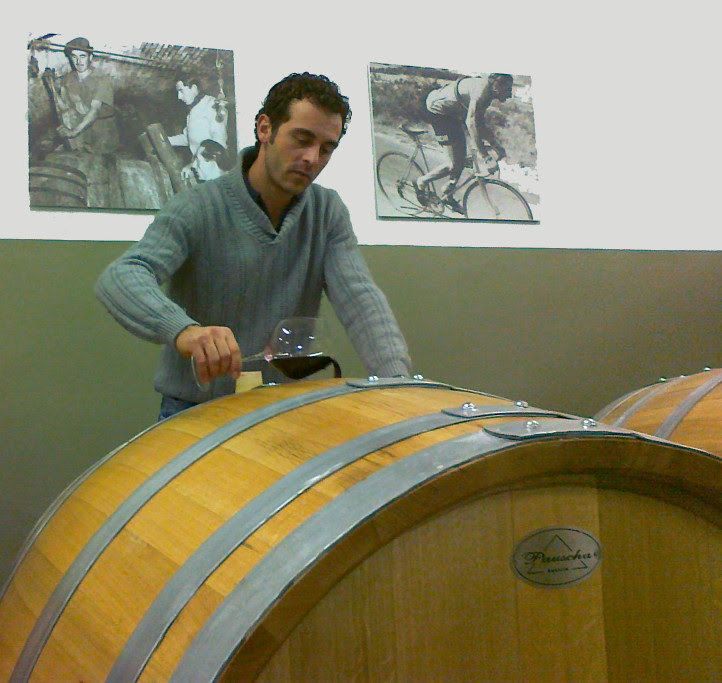 It was a little over a decade ago that Francesco Bellocchio of Vigne Marina Coppipurchased an 11 acre vineyard in the small village of Castellania. The tiny plot once belonged to his grandfather, Fausto Coppi, a legendary cyclist who died before Francesco was born. With such small vineyards, Francesco and his wife, Anna, are able to have total control of the land and the winemaking process. They do it all themselves, producing a mere 2,000 cases per year of top-class Colli Tortonesi wine using organic and biodynamic techniques. Everything is harvested by hand on their hillside vineyards at around 1,300 feet of elevation. The vines benefit from clay, sand and limestone soils and the cool nights and sunny days of Piedmont.

A Vigne Marina Coppi Masterpiece, cuvée “Sant’ Andrea” is a blend of 90% Barbera and 10% Croatina from a single 2.5 acre plot. Grapes are picked at peak maturity and the wine is fermented and aged entirely in stainless steel. This is about as pure and juicy as Barbera gets. Like a bucket of summer berries in a sun-drenched meadow. It’s a wine that makes you want to throw a party if only to drink it with friends. 558 total cases produced.

With its many overlapping appellations spread across the largest region of the Italian mainland, it takes a bit of work to wrap one’s brain around the wines of Piedmont. But what makes Piedmont so complicated also makes it exciting. While most wine drinkers have heard of Barolo and Barberesco there are another three dozen Piedmont wine zones that rarely see foreign markets. Colli Tortonesi is one of them.

Colli Tortonesi lies in the easternmost part of Piedmont on the hills surrounding the town of Tortona in the province of Alessandria, extending from Monferrato to Oltrepò Pavese. Production has been dominated by fizzy white wine made from Cortese grapes but more recently passionate winemakers like Francesco are driving both consumers and media to recognize the potential of Colli Tortonesi to produce wines of distinction.