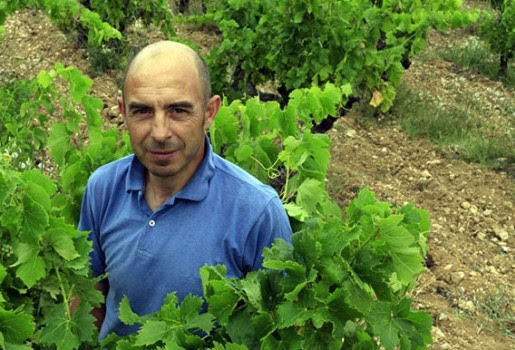 Formerly the most widely planted grape in France, and quite often overproduced, Carignan doesn’t have the best reputation. Generally, it’s high levels of tannins and acidity work best as a small proportion of a blend. But gifted vigneron like Sylvain Fadat know that very old Carignan vines that are managed artfully are capable of producing the concentrated ripe fruit needed for a wine of great significance. From the beginning, Sylvain has tirelessly defended Carignan as the “origin, history, and essence of the region.” So much so that he has declassified “Le Carignan” from the Languedoc Montpeyroux appellation (which requires no grape variety be more than 70% of a blend) to the more general status Mont Baudile IGP, just so that he could bottle this superb fruit on its own.

The 44 acre lieu-dit known as Aupilhac is a renowned, European certified organic property located in the enclave of Montpeyroux. Though five generations of Fadats have farmed these choice vineyards, it was Sylvain that brought the estate its acclaim. Not one to shy away from hard work, Sylvain cultivates vines on steep, extremely rocky terrain, and has even terraced much of the land himself. This is an enormous financial investment and back-breaking work but necessary in this case to reveal a great terroir.

Sylvain believes that effort in the vineyard has the most influence on the quality of his wine. At around 1,200 feet elevation and with southwest sun exposure, he coaxes old vines to root deep into soils of limestone, clay, scree, and blue marl. These are soils also rich in prehistoric oyster fossil deposits, which lend an incredible length and minerality to his wines.

“Le Carignan” is 100% Carignan from vineyards situated on these hillside terraces. The low yielding vines are over 60-years old. The grapes are harvested by hand, de-stemmed, and only indigenous yeasts are used. After barrel aging for 20 months, the wines are bottled unfiltered in accordance with the lunar cycle and optimal atmospheric pressure.

The result is a wine of concentrated dark fruit that’s never heavy on the palate, with ripe tannins on the finish and a final twist of freshness at the close. Above the elegant textures are a grocery basket of sumptuous aromatics: blueberry and red currants, moist earth, and the Languedoc shrubland (garrigue) that comes across as just the slightest hint of rosemary. While drinking beautifully now, this is a wine of longevity – reports have the 1989 vintage (Sylvain’s first) still drinking nicely. And this is one of the reasons that the Languedoc is still a region with some great values. You won’t find many wines for around $30 that can develop in the cellar for 25+ years.

A Daily Drinker from Domaine d’Aupilhac

It stands to reason that some of the best inexpensive wines are the ones made by winemakers who know how to make great wines. With all the characteristics of a quality Languedoc wine “Lou Maset” is made in a style that emphasizes its fresh fruit. It’s an ideal bottle for those busy weeknights when dinner consists of a quick cheese platter or even pizza. A blend of 40% Grenache, 40% Cinsault, 10% Mourvèdre, and 10% Carignan, vinification is done traditionally in stainless steel vats and the wine is aged a further six months in neutral barrels.