The vineyards of the northern Rhône, particularly Côte Rôtie and Hermitage, are some of the smallest in France, yet they produce some of the finest expressions of Syrah in the world. Join us this Saturday for a comparative tasting of these two top vineyards in northern Rhône. These wines are from the same producer, same vintage, and same grape variety. There is no better way to explore the nuances of terroir.

The appellation of Côte Rôtie is around 650 acres entirely based on the southeast-facing slope next to the Rhône River just south of the city of Lyon. The slopes are steep and gradients can reach 60 degrees in places. This is vine growing at its most extreme. Work in the vineyards – which includes moving soil back to the top of the slopes – requires pulleys and monorails. But the effort is worthwhile as these slopes are bathed in sun all day and the hard rock retains heat overnight allowing for full ripeness and concentration. The cuvée “La Boisselée” comes from 30-50 year-old vines in the lieu-dit of Le Plomb, in the schist soils of the Côte Brune.

With a mere 336 acres of vineyards all on one hill overlooking the Rhône, Hermitage is one of the most famous and smallest production zones in all of France. The slopes here are on the river’s east bank, giving the vines exposure to south and west while protecting them from the prevailing north winds. Although not as precipitous as Côte Rôtie, the steep slopes still require the backbreaking work of manual erosion repair as the topsoil annually washes down the hill. The granite soil based lieu-dit “La Pierrelle” lies at the top of the hill known for the most highly aromatic wines of Hermitage. The name, Pierrelle, refers to the galet stones littering the vineyard.

All grapes are hand-harvested and sorted during harvest. Fermentation takes place in cement tank and the wines are aged on average for 15 months in barrel (one or two years old). These are miniscule production wines and quantities are limited. 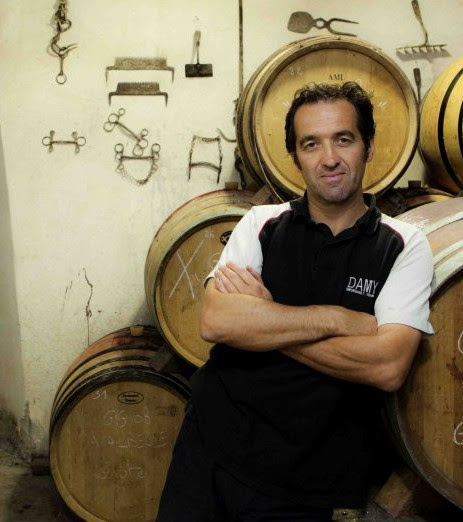 Fourteenth generation winemaker Louis Barruol took over the Gigondas family domain of Château de St-Cosme in 1992, it’s 500th anniversary year. Once the site of a Roman villa, Louis’ cellars show spectacular remains of old, Roman vinification vats carved into the limestone. Not entirely satisfied taking over the family business, Louis decided to craft a range of “micro-négociant” wines with the goal of saving the authenticity and the identity of exceptional parcels in Côte Rôtie, Hermitage, and Crozes-Hermitage. “My aim is to create wines that express their origin above all; for me that is the value of wine. To be reminded of a place on earth, especially when you are 10,000 kilometers away, is something fantastic for me.”

The 2013 vintage in northern Rhône was quite late but saw more outstanding wines than ever. Yields were generally low. Due to cool spring and summer conditions that helped to preserve acidity, the wines have great energy and balance, with more than adequate tannin structure to allow for modest aging. For enthusiasts that prefer the graceful rather than powerhouse northern Rhône Syrah, 2013 is proving to be an outstanding vintage.