Antoine Arena – A legend of Corsica

With only 5,500 cases total production of all Antoine Arena wines we were pleased to receive a tiny allocation of his “Carco” vineyard red and white bottlings. To introduce one of the legends of Corsican wine, we leave it to a good friend of Antoine’s:

“Antoine Arena as a winemaker is much larger than life. A few years ago, he was scheduled to present his wines at a small wine bar in Paris. A crowd of over 500 showed up to taste, he ran out of wine, and the wine bar owner had to call in the police to restore order. When I met up with Antoine and his wife in March at Restaurant Paul Bert in Paris, they were dining in the restaurant with the proprietor, hidden behind a curtain. The proprietor told me it was the only way he could have some privacy. Otherwise the diners would be besieging him all night for Arena’s autograph. His fame comes about for two simple reasons. One, his wines are extraordinary, and probably singlehandedly established the path of what we think of today as the ‘Natural Wine Movement’. Two, he’s Corsican, and there is nothing the French love more than the rebellious spirit of a true Corsican. 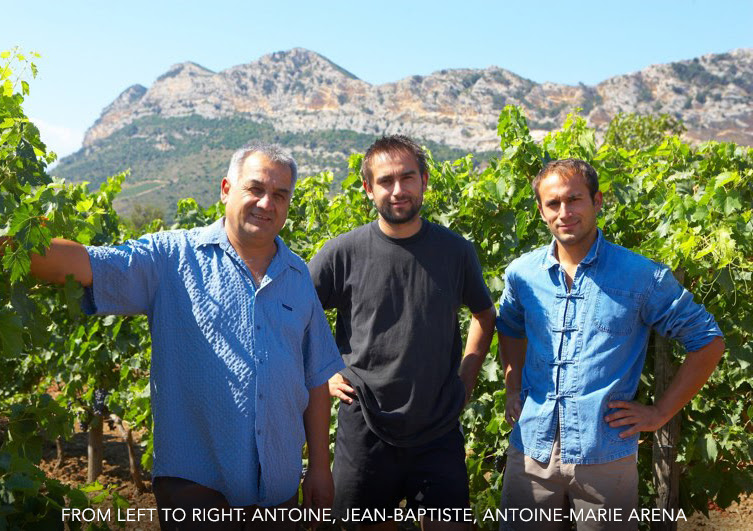 A few years ago, Arena slowly withdrew himself from his business and began to turn it over to his two sons, Antoine-Marie and Jean-Baptiste. At last we begin to see the preliminary results of that move. The brothers opted to continue to make wines under the Antoine Arena label as partners, working together in the vineyards and in the cellar. Each took over a portion of the vineyard holdings as well, and is making his own wine, each with a different label, and each with a slightly different style. We offer them to you as perhaps some of today’s most remarkable examples of all that represents the best about France and French wine.” – Bruce Neyers

The Carco vineyard was planted by Antoine in 1987 with Niellucciu (a descendant of Sangiovese vines brought to Patrimonio by Pisans with nearly nine centuries to adapt to the particularities of the local terroir) and Vermentinu. The grapes are harvested by hand and fermentation starts naturally. For the red wine, long macerations and up to two years of aging in concrete tanks and 350 liter neutral wood barrels yield a wine of savage elegance, ripe yet marked by a limestone nerve and minerality. On the nose the herbal and dusty Maquis shrubland of the island rises above aromas of sweet cherry and licorice. Add some sheep’s milk cheese or a hunk of lamb and you’ll be instantly transported to the Mediterranean.

The Wines of Jean-Baptiste and Antoine-Marie Arena

Vermentinu from 60 year old vines. Grotte di Sole (sunny grottoes) takes its name from its direct southern facing exposure. As the name implies, this clay-limestone terroir produces the ripest grapes from the property.

Non-fortified, Muscat Petits Grains-based wine from the Morta Maìo parcel which has belonged to the Arena family for over 400 years.