Winemaker Jean-Baptiste Granier grew up in a family of vignerons that had always respected nature and minimal intervention in the vineyards and cellars. So it was more than good fortune when Jean-Baptiste received an internship with Olivier Jullien as part of his viticulture-enology degree. Olivier Jullien, of Mas Jullien, is the leading producer in the region. He was a pioneer, recognizing the potential of Terrasses du Larzac to produce wines of distinction. Indeed, it was Olivier who initiated the whole “Les Vignes Oubliées” project and ensured its success before completely handing the reigns to Jean-Baptiste after the 2011 vintage.

The two often drove through the tiny village of Saint Privat and admired the magnificent bunches of grapes they saw growing there. After testing with trial cuvées over two vintages to ensure the quality of the fruit was as good as suspected, they convinced four vignerons, farming a total of 15 acres of vines with an average vine age of 40 years, to leave the cooperative that had been buying their fruit and work directly with Jean-Baptiste.

The only significant change Jean-Baptiste asked the vignerons to make was a shift towards organic agriculture. Even though the vines had never been subjected to heavy-handed chemical treatment Jean-Baptiste demanded the cultivation be sustainable for the earth and the vineyard workers.

Terrasses du Larzac recently earned its own appellation status as a Languedoc Cru. Saint Privat is at the heart of the Terrasses du Larzac terroir, benefiting both from the warmth of the Mediterranean and the coolness of the Larzac Plateau at an elevation of up to 1500 feet. The shale subsoil there creates fresh yet delicate wines with silky tannins and the earthy garrigue aromas characteristic of the Languedoc.

2014 “Les Vignes Oubliées” is a blend of 60% Grenache, 20% Syrah and 20% Carignan. The fruit is hand harvested, with sorting done in the vineyards and again in the cellar. Indigenous yeasts are used for fermentation and the wine is aged for 12 months in demi-muids and barriques (10% new). The result is a wine that is generous with fruit yet exquisitely detailed in its seamless textures. Aromatics abound with juicy red fruits and assorted herbs. This will be a superb red wine to welcome the warmer weather that we’ve all been waiting for. Total production is 1900 cases. 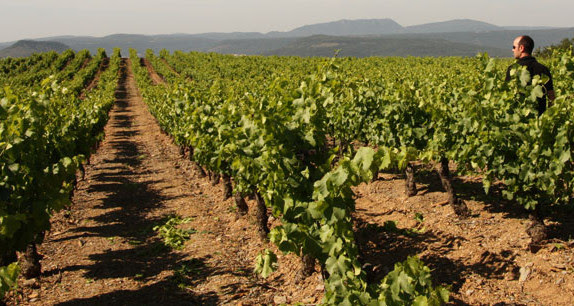