Meursault is one the most famous vineyard regions in the world for good reason. It offers a combination of flavors found in few chardonnay wines anywhere. When we can find a wine that truly expresses the terroir of Meursault we stock up. When we’re able to source it directly and offer it at such a great price we buy everything we can.

The vineyard Les Meix-Chavaux lies just outside the village of Meursault. The vineyard name roughly translates into “house uphill from the valley.” But while the name might be uneventful, the wines are most certainly not. The Lafouge holdings are mid-slope, facing east-northeast, and comprised of vines over 80 years old. The celebrated Domaine Roulot (which Lafouge is often compared with) also has a small plot of old vines in the same vineyard, and their wine demands close to $200 a bottle. 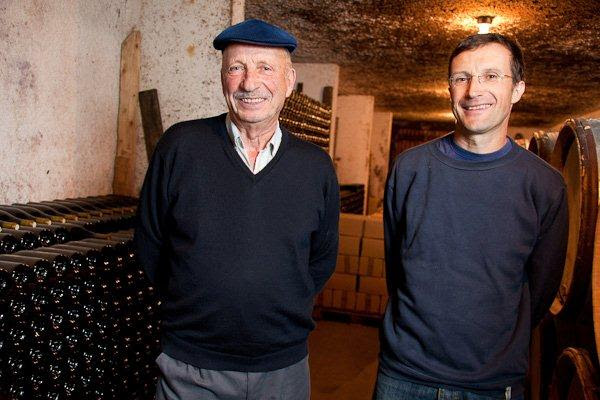 Gilles Lafouge is the sixth generation winemaker in his family. Like a good Burgundian farmer, his father, Jean, can still be found working the vineyards. But it’s Gilles that’s in charge of making the wine. Domaine Lafouge is based in Auxey-Duresses, the commune just north of Meursault, and they are frequently cited as one of the top producers there. Yet there is clearly no disconnect from Meursault. Gilles married the daughter of Michel Bouzereau, former President of the Burgundy Growers Union and renowned producer of traditional Meursault. This is a family steeped in Burgundy.

Lafouge’s vineyards are meticulously cultivated using organic techniques. The grapes are harvested completely by hand and sorting is severe to ensure only the best fruit makes it into the fermentation barrels. It’s all laid bare in a glass. Complex and vibrant, the 2013 Lafouge “Les Meix-Chavaux” offers aromas of apples, citrus, spring flowers and raw almonds. On the palate the wine is full of pure fruit and chewy minerals. It has both grip and finesse. It’s a natural pairing with everything from sweet sea flesh to roast chicken in a mushroom cream sauce. While it drinks well now, this is a wine that will continue to develop in the cellar for another decade.