Embrace Autumn with a Brilliant Red from Italy’s Piedmont

There will still be a few days left this year to sneak some rosé on the patio but autumn is approaching fast. Just because you may need an evening sweater doesn’t mean it’s time to break out the classified Bordeaux and beef roast. Make the transition effortless with the ripe raspberry and black cherry fruit aromas of this benchmark Barbera d’Alba. It’s bright enough to drink easily on a warm and golden day yet has the body and tannic weave that will hold up to the arrival of the old brown earth.

The quality of Italy’s Piedmont wines owes much to traditional concepts of viticulture, a stubborn preference for native grape varieties, and a healthy conviction that vineyards belong on hills and not plains. This is Hilberg-Pasquero in a nutshell. 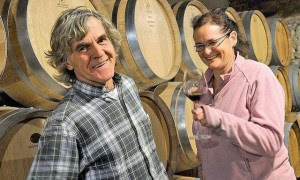 The Pasquero farm was founded in the early 20th Century on a hilltop (Bricco Gatti) of the Roero hills north of the Tanaro River valley, a stone’s throw from Barbaresco. Today, it’s run by the husband and wife team of Michelangelo “Miklo” Pasquero and Annette Hilberg. There they are raising their three children (Nicola, Aline and Nils) in addition to celery, leeks, tomatoes, peppers, cucumbers, pumpkins, corn, grain, Borlotti beans, rabbits, geese, hens, cows, pigs, horses, and, of course, grape vines.

Miklo has always had a passion for biodynamic farming. That, coupled with his non-interventionist approach to winemaking, shows in the purity of his wines. Working with a steel crusher from the 1960s out of a tiny cellar in the town of Priocca, Miklo converts the sun’s energy into tiny amounts of award-winning wines. Annual production of Hilberg-Pasquero Barbera d’Alba is a mere 300 cases. It’s remarkable that Detroit sees this wine at all.