Nicolás Marcos clearly likes a challenge. He left his family’s winery in Toro, where generations had made wine previous, did a stint with the distinguished Alain Graillot in Crozes-Hermitage, and then settled into the northwestern region of Asturias, specifically Cangas del Narcea. Gastronomically, Asturias is perhaps best known for its apple orchards that produce some of Spain’s best sidra (hard cider), its cheeses, and the famous bean stew fabada. Nico was determined to show the world that the soil, micro-climate, and indigenous grape varieties of Cangas del Narcea were capable of delivering world-class wines. That determination has translated into success.

Wine making in Cangas dates back to the 9th century. Wines made here can presently use the “Vino de Calidad” designation but with the work of serious grower/winemakers like Nico the region is currently heading toward official DO status, the highest level of specificity in the Spanish wine regulation system.

Growing grapes in Cangas is no simple task. Vineyards are subject to the vagaries of the humid Cántabro-Atlántica climate and Nico’s parcels are on hillsides so steep they probably should be worked by mountain climbers. On top of all that, Nico has chosen to forgo artificial chemicals and work all of his vines using biodynamic principles. Yet he’s no crunchy hippie. Besides restoring his vineyards (many with vines over 100 years old) back to health, Nico believes that these holistic farming methods help create wines of balance, personality and varietal expression. And we did say he likes a challenge.

Only 700 cases produced, Pésico is a blend of equal parts Carrasquín, Mencía, Verdejo Tinto, and Albarín Tinto, all grape varieties indigenous to the region. Nico vinifies the juice from about 18 acres spread over parcels from four different crus. Each parcel is fermented separately with indigenous yeast before blending and partial aging in French oak barrels (including second year barrels from Domaine de la Romanée-Conti). This is truly a wine that speaks of the land, ripe yet fresh, bursting with blue fruits and layers of texture before a lengthy finish. 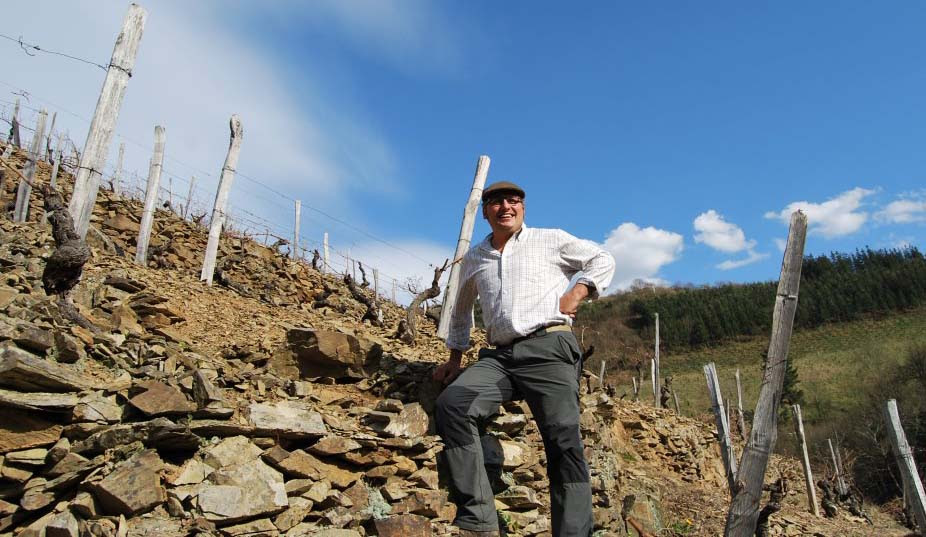