Although winemaking has been going on for centuries in the tiny mountain district of Priorat, it wasn’t until the mid-1990s, when a group of winemakers moved in and began making revolutionary wines, that it came to international attention.

It was back in the 12th Century that Carthusian monks established the Priorato de Scala Dei (the Priory of the Stairway of God) on this terrain of steep slopes and wild, folded hills northwest of Tarragona. Priorat is now one of the most progressive winemaking regions in all of Spain. It is currently one of only two regions in Spain designated as DOCa (DOQ in Catalan), the highest qualification level for a wine region according to Spanish wine regulations, alongside Rioja DOCa.

This is the landscape in which the young Blai Ferré creates wine of intensity and balance. Ona is Priorat in the raw, no elaboration, merely the core of great fruit showing the potential for creating the type of wine Priorat has become known for: Upscale wines intended for the cellar that reveal an insight into time and place after years of development.

He fell in love with winemaking while as a teenager working the ﬁelds with Alvaro Palacios — one of the leading winemakers not only in Priorat, but all the world. Blai then purchased two small lots of his own, about 12 acres worth of land. He likes being self-sufﬁcient and doing everything himself – with a little help from his family around harvest time, as you can see – and produces a scant 2000 bottles of Ona, selling the rest of the harvest to other producers.

2011 Ona is a blend of Garnatxa, Syrah, Carinyena and a splash of Cabernet Sauvignon. Cultivation is organic and the harvest is hand-picked and hand-sorted. Half of the wine is aged in stainless steel vats and the other half in French oak for eight months. We’ve found that it’s a wine that always outperforms its price level. A fantastic bottle to have on-hand for guests or to bring to parties. And it’s versatile enough to be paired with a simple cheese plate to roast lamb and everything in-between. 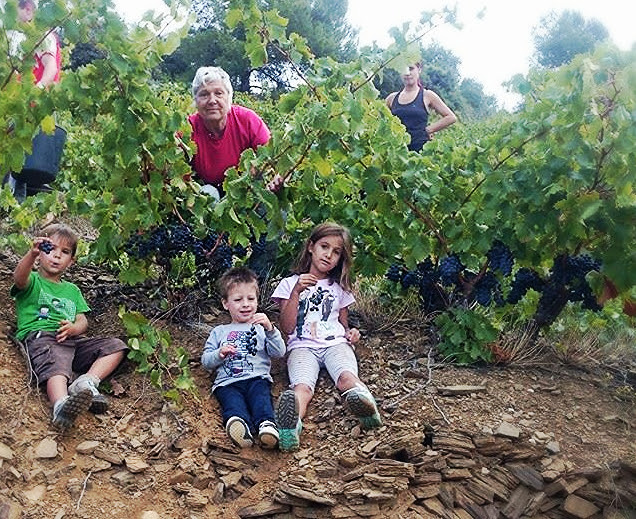 NOTE: We’re friends with Blai on facebook and we lifted these images from his mobile uploads. The top image is his brother in the Syrah vineyards. Beneath that is Blai’s Syrah soaked hand after pressing. And the last picture is Blai’s mother, son, daughter, and godson all helping out in the vineyards.