As a distinguished wine writer and author of five books on Portuguese wine, the British-born Richard Mayson has championed Portugal as a treasure trove of varied terroir and indigenous grapes with world-class potential.

He fell in love with Portugal in 1979 when he worked for a summer at a restaurant in Algarve. As early as 1989 he had identified the under-the-radar Portalegre sub-region in the Alentejo in the south as an ideal breeding ground for great wine: The high altitude of the Serra de São Mamede mountain range, the moderate climate and the stony soil all promised to produce excellent wines.

Richard purchased the Quinta do Centro vineyard in 2005 and created Sonho Lusitano (“Lusitanian Dream”) with partner Rui Reguinga, a winemaker and consultant. From the start Richard aimed to make a splash on the international stage with wines firmly rooted in the local terroir.

Duas Pedras (two stones) is named after the schist and granite soil. It’s a blend of 60% Touriga Nacional and 40% Syrah bottled with minimal wood aging to most capture the character of the fruit. Dark crimson and dense in the glass it radiates aromas of smoked meat and flowers. A drink is big, earthy, and filled with rich blueberry and dark cherry flavors to finish with just enough structure to balance all that fruit. We’ve also discovered this wine will take a slight chill so it’s quite versatile in the warmer summer months. 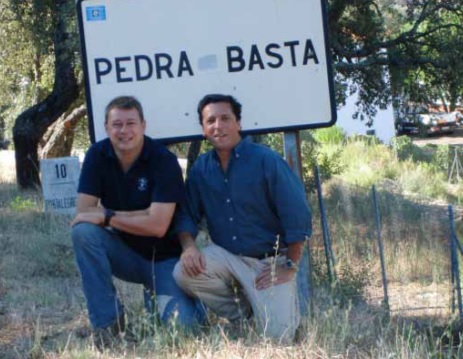