Like the Roman god from which this appellation takes its name, Mercurey is often associated with the color red—and that’s because 90% of Mercurey’s vinous output is Pinot Noir. Situated in the heart of the Chalonnaise, Mercurey claims about 1600 acres of land under vine; 1300 are Pinot Noir with the remainder divided between Chardonnay, Pinot Blanc, Pinot Gris and Aligoté. 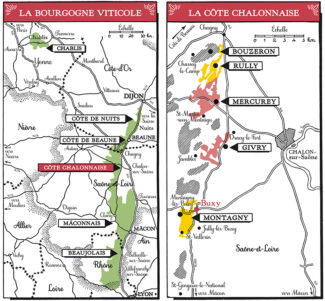 Jean-Pierre Renard, who teaches wine appreciation and tasting at the École des Vins de Bourgogne, describes Mercurey’s orientation as identical to that of the Côte Chalonnaise—north to northeast and south to southwest, with the Golden Valley running down the middle. On the eastern side, vines are planted in calcic soils of Oxfordian limestone, while in the west, crystalline Jurassic rocks are overlain by gravel. Protected from moisture-bearing winds by the hillsides, the vineyards stretch as far as the neighboring village of Saint-Martin-sous-Montaigu. According to local grower Amaury Devillard, Mercurey is a hidden jewel among Bourgogne wines and remains one of the best price/quality wines available: “It was once known as a rustic wine, but the Mercurey of today is completely different. Our wines express fruitiness, cherries especially, with a nice spiciness in the finish.” 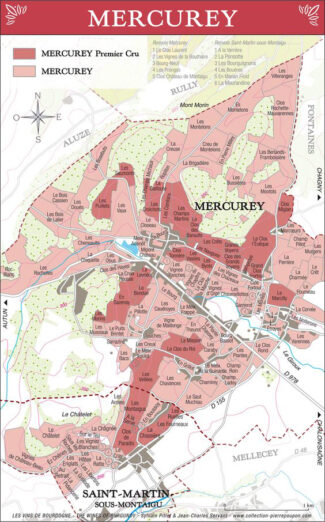 This improvement in quality is in part because many Mercurey winemakers are better than the AOP might suggest. Although up to 15% of Chardonnay, Pinot Blanc and Pinot Gris are permitted as accessory grapes in the red wines, this is rarely practiced, and certainly never in the Premier Cru wines, which make up a quarter of all vineyards and account for 31 officially recognized and delimited climats.

Magical (2019) Vintage: Fresh with an Indulgent Side

Could 2019 rival 1865, arguably the greatest Burgundian vintage of all times? According to Bernard Hervet, former director of Faiveley and Bouchard, it could. The winter was mild but spring was chilly; to some extent, crop yields were limited by frost during bud break and further by a hailstorm on July 7, but the berries that survived were richly concentrated. Late summer heat threatened to produce jammy wines (the antithesis of the Burgundian paradigm, which calls for freshness and tension), but those picked early enough are very well-balanced. In general, the wines display precise fruit with elegant tannins and lively acidity; wines from top estates have excellent aging potential, but nearly all of them are already open and enjoyable.

The upside of a very dry growing season like 2018 is that mildew is minimized along with most of the other diseases that thrive in damp summers. Drought stress played a factor in yield reduction, and growers were forced to call on all their skills to preserve freshness, since the already-concentrated fruit ripened quickly and became more concentrated in the heat. Top houses know that perfect skin ripeness is key to producing superlative Burgundy, and the balance between phenolic ripeness and acid preservation is what sets them apart. Wines from the Chalonnaise turned out particularly well in 2018; many growers produced soaring red wines with textbook balance.

The domain has a history as long and fascinating as any in Burgundy. In 1113 twelve monks left the Abbey of Citeaux and headed south to the Chalonnaise, where Foulques de Reon (the Count of Chalon) gifted them a parcel of cleared land in order to establish a new Abbey. Naturally, being Burgundian monks, they started producing wine, and thus was born the Domaine du Cellier Aux Moines, which is still producing superlative Premier Cru wines to this day. 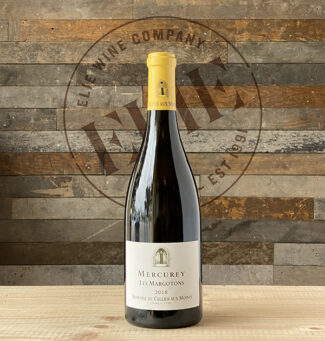 2018 Domaine du Cellier aux Moines ‘Les Margotons’ Mercurey White ($31) is a relative rare beast in Mercurey, 100% Chardonnay. Les Margotons is a single northeast-facing vineyard planted in 1987, about an acre and a half in size, whose white marl soil base and cool, hillside exposures produces distinctly tropical flavors in the wine; crushed pineapple and bright white floral notes are enhanced by toasted hazelnut and vanilla and finishing with peach and crisp minerality.

Synonymous with fine Burgundy, Domaine Faiveley has been a fixture in Nuits-Saint-Georges since 1825 when négociant Joseph Faiveley began traveling through Europe trading wine for textiles. Today, it is still run by his family; Eve and Erwan Faiveley, and the original estate has extended throughout the Côte de Nuits and into the Côte Chalonnaise and Chablis. 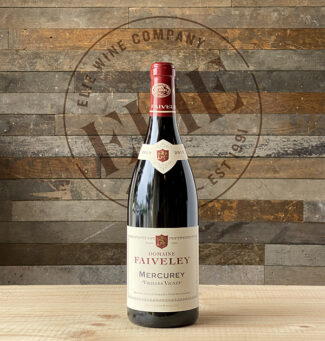 2019 Domaine Faiveley ‘Vieilles Vignes’ Mercurey Red ($43): ‘Vieilles Vignes’ means ‘old vines’ of course, and at thirty-years plus (planted in 1962, 1978 and 1981), these may not be the oldest vines in Mercurey, but they are producing splendidly. After fermentation, the wine is aged for 12 months in French oak barrels (10% of which are new) and show a wine that is round and ripe with vivid cherry notes embedded in a velvety body which remains firm and muscular, yet aligned with poise.

Encompassing 19 southwest-facing acres in the heart of the Chalonnaise, Domaine Adélierepresents the final acquisition of Maison Albert Bichot, and produces both Village and Premier Cru wines. The estate was named for Bichot’s daughter, and the daughter was in turn named for Adélie Land in Antarctica, which the adventure-loving Bichot once visited. Despite his travels, Bichot states without reserve: “I will always feel like a Burgundian. These are my roots.” 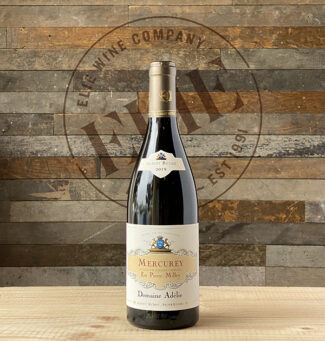 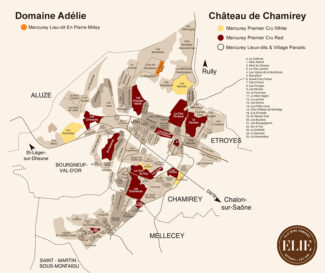 In 1934, the Marquis de Jouennes began to bottle the wines of Château de Chamirey at the domaine; his son-in-law, Bertrand Devillard took over, and expanded the holdings to the present size. Today, Amaury and Aurore Devillard stand proud as the 5th generation of the family to manage the estate. Of the 95 acres that encompass de Chamirey’s vineyards, about 70 are dedicated to Pinot Noir and the rest to Chardonnay; of the total, 21 acres are Premier Cru and about eight represent the acres for which de Chamirey is best known, Monopole wines, including those of La Mission and Clos du Roi. The peculiarly Burgundian term ‘Monopole’ dates back to Napoleonic inheritance laws that saw properties so subdivided (even down to individual rows of vines) that a lone grower was often not able to provide commercial grape quantities to négociants. A ‘Monopole’ wine represents a single area, often a lieu-dit vineyard, controlled by a single winery.

2018 Château de Chamirey Mercurey Premier Cru Clos du Roi Red ($52): To elicit the maximum extraction of color and phenolic compounds, the Pinot Noir is held pre-fermentation between 4 and 6 days, following which a full two-week maceration concentrates tannins and aromatics. Clos du Roi is a southwest-facing, concave slope divided into 4 adjacent plots for a total of 7.6 acres planted between 1970 and 2002. The nose shows expressive strawberry and raspberry notes behind pie spices (cinnamon and nutmeg); the palate is cherries, plums, cassis, licorice and candied citrus peel. 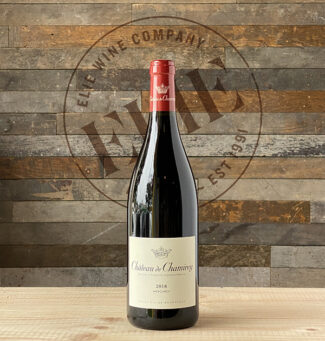 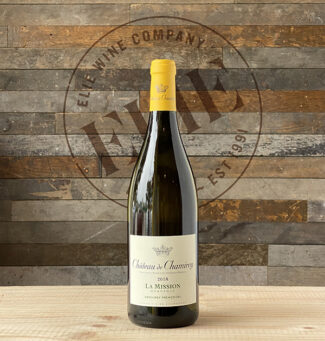 2018 Château de Chamirey Mercurey Premier Cru La Mission (Monopole) White ($54): With vines planted between 1961 and 1997, this five-acre Monopole grows in a mix of sand and clay on a hilltop overlooking Clos du Roi. Grapes are harvested and sorted by hand and fermented in lightly toasted Allier and Voges oak, then aged in 228-liter barrels of the same cooperage. Balanced and nicely dense, the wine shows creamy lime and vanilla notes behind buttered brioche with a long, caramelized finish. 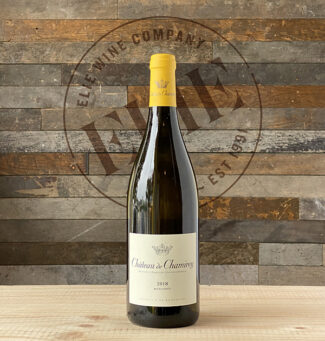 2018 Château de Chamirey Mercurey White ($31):Raised from 6 different plots across the village, the diversity and typicity of each plot reflect their richness in the wine. A floral nose redolent of white springtime blossoms; fresh, vibrant, and crisp with discreet flavors of ripe peaches, light spice and a nice backbone of acidity.

At long last, we announce the return of Saturday Sips with a tasting of Domaine de la Ferté (Givry 2019).

Formerly the epicenter of wine production in the Côte Chalonnaise, Givry was the preferred source for King Henri IV’s wines in the 16th Century, and still represents some of best values in the Côte. Domaine de la Ferté is one of five estates owned by the Devillard family (which also includes Château de Chamirey, above); Ferté covers a relatively small area of six acres spread over three plots, two in the village appellation of Clos Mortière and one in Servoisine Premier Cru. It thrives under the direction of enologist and ‘chef de culture’ Enrico Peyron. 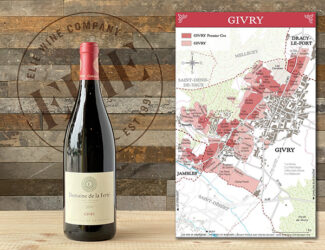