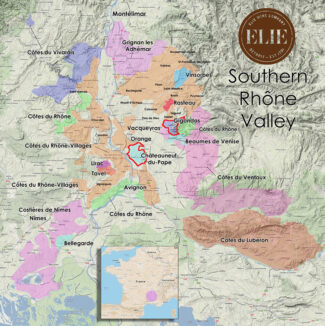 Lieux-dits are a wine lover’s Google Earth; a satellite view of an appellation focused on a tiny, representative parcel. Not all vineyards have lieux-dits, and among those that do, not all are created equal. In general, it’s a term that refers to a geologically homogenous portion of a vineyard with a self-contained story to tell about its quality or, occasionally, its significance to history. Although lieux-dits are generally not required to be formally registered, they are always named, and that name may occasionally be confused with a producer’s cuvée name, which is often similar. Different appellations have different laws regarding lieux-dits; in Alsace, for example, they are mandatory for Grand Cru AOP labels, whereas in Burgundy, Grand Crus are forbidden from using them.

In the Rhône, lieux-dits are often associated with the region’s top estates, and those that do not have an officially registered place in the French Cadastre are considered ‘les marques’ of their producers. In either case, they are ‘terroir distilled’—an extremely fine-tuned expression of an individual location. To recognize one is to recognize that within the sprawling Rhône there exists an almost microscopic essence that only a lieu-dit can reveal.

Domaine Santa Duc’s 6-bottle pack contains one of each of the following wines at $380 including tax.

Domaine Santa Duc: At the Foot of the ‘Dentelles de Montmirail’

At Santa Duc, in the verdant environs of Gigondas, heritage is as deep as the iron-rich soils. Six generations have leapfrogged each other as caretakers of the storybook estate at the foot of the Dentelles de Montmirail hills and each has brought to the party a unique respect for terroir and tradition. Yves Gras, Domaine Santa Duc’s winemaker for 32 years, became a standard bearer for innovation with his elegant wines; he replaced barrels with 3600-liter casks to tone down the oak and championed a greater percentage of Mourvèdre used in cuvées. His ongoing quest for cooler terroirs capable of producing great wines ultimately took him from the plateau of Gigondas to Châteauneuf-du-Pape (10 miles to the southwest), where he was able to purchase several choice parcels.

With the 2017 vintage, Yves’ son Benjamin Gras took over the domain and quickly proved himself to be as much a visionary as his father, switching immediately to biodynamic agriculture and building a state-of-the-art winemaking facility on the property. Benjamin has the passion, the Gras DNA, but also the educational pedigree to buoy his future: After obtaining a diploma in oenology at the University of Bourgogne in Dijon, he spent time at Domaine de la Romanée-Conti and Bodega Vega-Sicilia, and the OIV MSc in Wine Management program gave him the unprecedented opportunity to visit more than two dozen wine producing countries and study their techniques, their terroirs, and their traditions.

In Southern Rhône, unexpected June rainfall caused some difficulties with mildew and farmers lost a good portion of the crop. Eventually, the damp weather dried up, replaced by a hot, dry summer, and by harvest, temperatures were high and producers had to work quickly when handling the grapes. The reds of Châteauneuf-du-Pape, Gigondas and Vacqueyras are especially good, with dense concentration and solid structures. 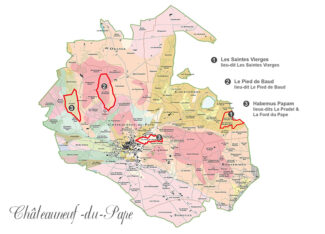 Châteauneuf-du-Pape is a land of sunshine and wind, and these factors combine to make Rhône’s most famous appellation naturally resistant to bugs and mildew; here, pesticide-free farming is not innovation but traditional precedent. With more than 8,000 acres under vine, Châteauneuf-du-Pape is the largest appellation in the Rhône; 94% of the three million gallons of wine produced each year is red, and of that, 80% of the content in every dark, heavy, distinctively-embossed bottle is Grenache, although another 12 varieties are legally permitted. These wines will never display the austere elegance of Bordeaux or the brooding sophistication of Burgundy, but they are sumptuous, opulent and hedonistically accessible throughout their youth and often remain so after many years in the cellar. That said, they can vary wildly in price and character; many are generic in style and reputation, and the wines contained within this package have been chosen especially for the specificity of their lieux-dits and their ability to express Châteauneuf-du-Pape’s quintessential goût de terroir.

1- ‘Les Saintes Vierges’ 2018 Châteauneuf-du-Pape ($70) – 3 acre parcel in lieu-dit Les Saintes Vierges – Santa Duc’s first and most treasured CdP lieu-dit, located in the east side of the AOP. Vines average seventy years of age and are planted on soils rich in quartz and mica with shell debris and compacted sand from the Miocene period. The wine presents a marvelous display with aromas of anise and black plum flecked with notes of spicy cardamom; the palate is rich and filled with red fruits and silky tannins. 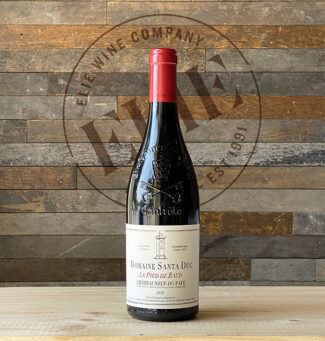 2- ‘Le Pied de Baud’ 2018 Châteauneuf-du-Pape ($70)– 2.5 acre parcel in lieu-dit Le Pied de Baud – Benjamin Gras’ goal in winemaking is balance and tension—tension occurs when two qualities duel for dominance (in this case, fruit and acidity), and balance is achieved when they meet in the middle. From a forest-encircled parcel of superb land on the Mont Redon plateau, the wine shows sweet black raspberry syrup, spice-cake and candied lavender amid fine-grained tannins and a pronounced minerality. 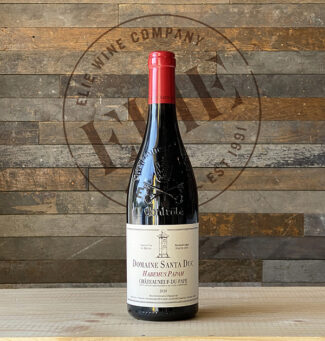 3- ‘Habemus Papam’ 2018 Châteauneuf-du-Pape ($54)– 7 acres in total in lieux-dits Le Pradel and La Font du Pape – The vainglorious name means ‘We have a Pope’ and Santa Duc describes this wine as ‘episcopal’. Celestial underpinnings aside, the wine comes from two plots to the west and center of Châteauneuf-du-Pape where the earth is rich with sandy clay above and calcareous subsoil below. The cuvée is 70% Grenache and 30% Syrah with an average vine age of 60 years. The wine has a nose of violets and smoke interspersed with deep red wild berry notes and a pristine and opulent mouthfeel.

Where Châteauneuf-du-Pape is sun and wind, Gigondas is forest and scrubland filled with wild lavender, sage and thyme, forming the archetypal ‘garrigue’ of Southern France. These brambly, herbal aromatics are a common in tasting notes of Gigondas wines, and it is perhaps testimonial to the phenomenal power of terroir that grapes and wildflowers can coax the same flavors from the earth: a combination of limestone soils on the Montmirail slopes to the east, and rocky, sandy, free-draining soils on the flatter, lower-lying plains to the north and west. Maximum yield in Gigondas is set at 36 hectoliters per hectare, only slightly more than the restrictions of Châteauneuf-du-Pape. As an additional quality assurance, a technique known as ‘triage’ is employed—the mandatory separation of healthy grapes from imperfect grapes.

4- ‘Les Hautes Garrigues’ 2018 Gigondas ($69) – 7 acre parcel in lieu-dit Les Hautes Garrigues – ‘Les Hautes’ is the Gras family’s legacy vines—they have existed at the heart of the domain since it was founded in 1874. Geology has been involved for far longer; the red clay and gravel soils were formed as a colluvial fan known as the Cône de la Font des Papes during alternating ice ages. The blend here is even-steven—half Grenache and half Mourvèdre from vines that are around 75 years old. The wine expresses an assertive nose of black cherries, chocolate, ginger and menthol on a background where the classic garrigue notes are omnipresent.

5- ‘Clos Derrière Vieille’ 2018 Gigondas ($54) – 8 acre parcel in lieu-dit Clos Derrière Vieille – Clos Derrière Vieille is a phoenix-from-the-ashes redux; in such poor shape was the vineyard when Santa Duc bought it in 1994 that it took years to regain its former status. Situated at an altitude above one thousand feet, and arranged in narrow terraces that follow limestone outcroppings, the soil is moisture-retaining marl and rich limestone, allowing a deep root system. The name means ‘Behind the Old Woman’, a reference to the church behind which the vineyard sprawls. 80% Grenache, 10% Mourvèdre and 10%, Syrah, the wine is bright and crunchy with acidity and fruit-forward, showing dusty earth, dried cherries and Herbes de Provence.

6- ‘Aux Lieux Dits’ 2018 Gigondas ($42) – 17 acres in total in lieux-dits Goujard, le Clos Derrière Vieille, Les Pailleroudas, Les Hautes Garrigues, Les Carbonnières, Les Rocassières, Plane and Les Routes – A selection from all of Santa Duc’s vineyards may defy the spirit of the lieu-dit, but the wine becomes its own statement. It is a classic Gigondas from a powerful vintage with an intense nose of spring flowers, cassis, blackberries, wood-smoke and cherries, full, elegant and dense with a persistent finish.