From the soils of Pessac-Léognan on the left bank of the Garonne in Northern Graves, Château Smith Haut Lafitte’s history in Bordeaux dates back over 800 years. The estate started as part of the Du Boscq holdings and vines were first planted in the 14th Century on the gravelly Lafitte Plateau. For centuries the terroir was recognized for its superiority and Smith Haut Lafitte was ranked among the Crus Classés for red wine in the Classification of Graves wine of 1953 and 1959. 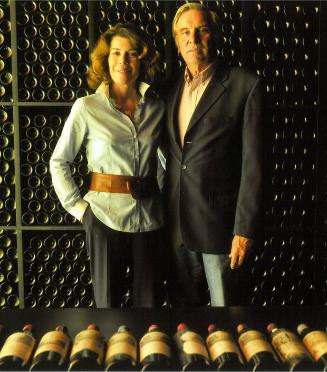 But it was when Daniel and Florence Cathiard purchased the estate in 1990 that Château Smith Haut Lafitte’s greatest leap in quality began.

One of the first changes the Cathiards implemented was hand harvesting of the fruit. To avoid damage to the berries and subsequent oxidization, the freshly picked fruit is placed in specially designed carriers developed by Daniel Cathiard based on a design used by Sherpas in the Himalayas. Manual sorting is a major part of the work that takes place at Smith Haut Lafitte. The fruit is sorted two separate times to ensure that only the most desired raw material makes it into the finished wines. All work in the vineyard is organic and self sustainable and many of the farming techniques are biodynamic. In the cellars, all the wine is moved by gravity.

Second label Bordeaux have always offered incredible value, but as the selection process for the “Grand Vin,” or first wine, has gotten stricter, today the best “seconds” offer an even greater value than in the past. Designed during the blending of the Grand Vin of Smith Haut Lafitte, Le Petit Haut Lafitte is vinified and aged with the same care as the batches that will become the first wine of the Château.

The 2015 Le Petit Haut Lafitte is a blend of 60% Cabernet Sauvignon and 40% Merlot. Maturation is carried out in oak barrels (20% new). This is no mere fruity afterthought to the Grand Vin; Le Petit Haut Lafitte is loaded with power and structure. A meduim-bodied palate and a mineral finish are buoyed by aromatics of black cherry and earthy things. The vintage shows through with richness and elegance. This is a wine to drink and hold.

The Grand Vin of Château Smith Haut Lafitte sports a classy new label in 2015 to celebrate the 25th harvest of the owners Florence and Daniel Cathiard as well as the 650th year of existence of the estate. This wine is a blend of 63% Cabernet Sauvignon, 33% Merlot, 2% Cabernet Franc and 2% Petit Verdot, matured in 65% new oak barrels. It offers up a shopping cart full of huge aromatics including chocolate-covered black fruits, flowers, licorice, and graphite. Both opulent and well-structured, you can expect the wine to drink beautifully over the course of the next two decades, at a minimum. Robert Parker’s Wine Advocate gives this stellar vintage 97 points.