Our first rule for selecting Thanksgiving wine is not to freak out. The meal is far too diverse with textures, flavors and aromas to labor over perfect pairings. The wines should be light, refreshing and energetic, with moderate alcohol, lots of fruit, a lively acidity, and versatile enough to complement everything from the roast bird to Aunt Grace’s green bean casserole. Perhaps even more importantly, you should have plenty of wine. Thanksgiving is time for merriment and the wine should be as bountiful as the food without being too pricey — A magnum (1.5 liter bottle) on the table is always an invitation to celebrate. Beaujolais checks all the boxes. It is a wine that is somehow simultaneously uncomplicated and consequential.

Stop by this Saturday to sample a few different Beaujolais ideal for your Thanksgiving celebration and stock up with special discounts on all featured wines. All prices based on purchase of six or more bottles.

SOLD OUT
The benchmark domaine in the Côte de Brouilly. The Geoffray family has been farming their steep, south-facing slopes of decomposed pink granite for over a century. The Rosé is sourced from a 2.5 acre plot of 50 year old vines. It is produced by direct pressing the grapes and allowing the skins to macerate with the juice for one day before vinification in cool, temperature-controlled stainless-steel cuves.

SOLD OUT
100% Chardonnay vinified in one to 10-year-old barrels and aged on the lees for eight months.

SOLD OUT
Sourced from the Reverdon sector of Mont Brouilly, an area known for producing wines of great finesse. Whole cluster fermentation for about a week and then aged in concrete tank for eight months.

SOLD OUT
From vineyards situated on steep slopes with a 48% grade and exposed to the South, East, and Southeast. The wine ages in oak foudres for six months before bottling. 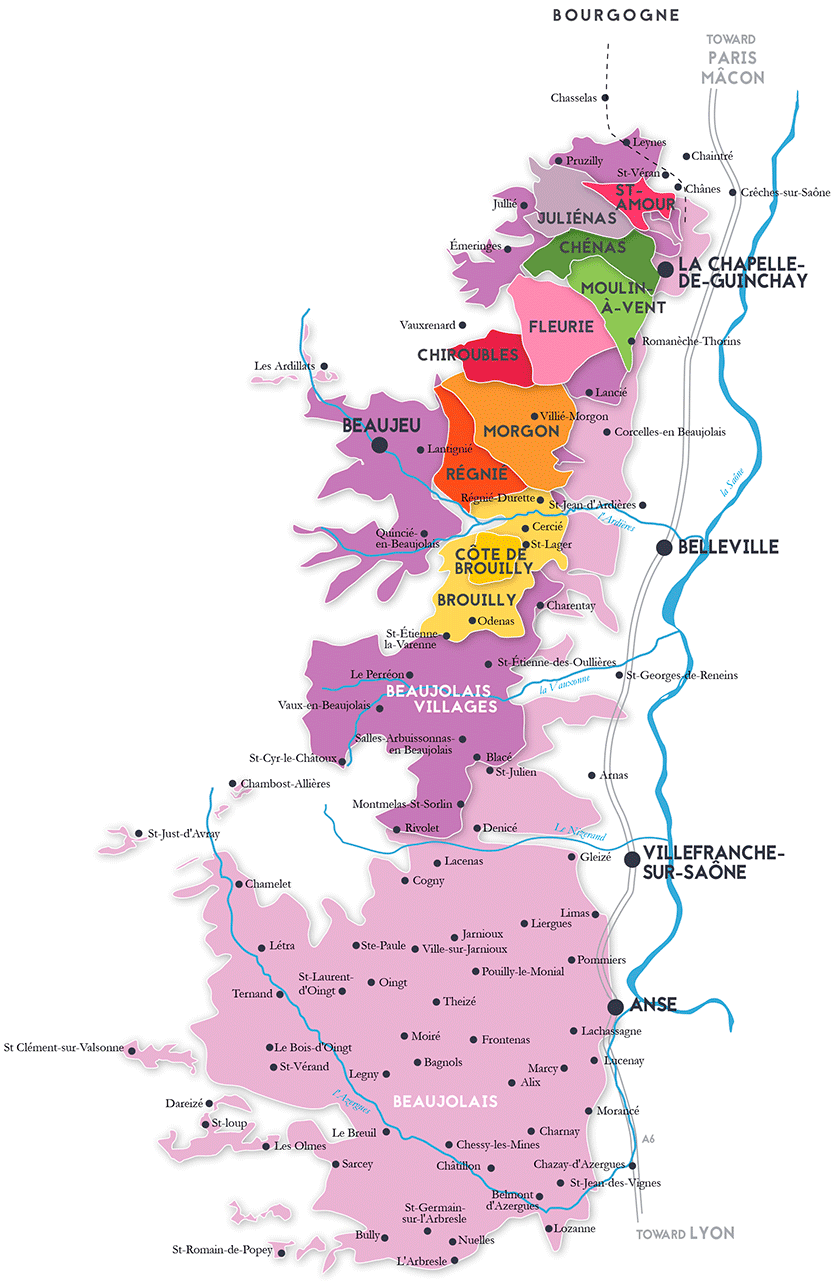 ~$28 Domaine Robert-Denogent “Cuvée Jules Chauvet” (Beaujolais Villages 2015)
In 1988, Jean-Jacques Robert took over 12 acres of his grandfather’s vines in the Mâconnais region of Burgundy just outside the village of Fuissé and soon came under the influence of one of the masters of terroir-focused Beaujolais, Marcel Lapierre. “Cuvée Jules Chauvet” is made from a parcel leased from the niece of another Beaujolais legend, Jules Chauvet. The wine is made with rigorous sorting in the vineyard and minimal intervention in the cellar and then aged for 16 months in seven-year-old barrels.

SOLD OUT
Jean-Paul Thévenet is another disciple Jules Chauvet, returning Beaujolais production to more traditional practices. He farms his small 12 acre domaine with his son, Charly, who also makes his own wine from the neighboring Cru Régnié. Since 2008 the two have taken the domaine to the next level by adopting organic and biodynamic viticultural practices.

SOLD OUT
Only 525 cases produced, “Grain & Granit” is the essence of serious and seriously drinkable Cru Beaujolais. The fruit is perfectly ripe, with thick skins and ideal acidity. This translates to a wine that clearly shows its Burgundy pedigree. High-toned violet, raspberry, and cherry licorice aromatics precede a sip that is sublimely balanced between firm, fresh fruit and mineral structure.

SOLD OUT
Guy Breton’s Régnié is sourced from the hills between the Côte de Brouilly and the Côte du Py of Morgon, around the village of Régnié-Durette. Guy’s grandfather handed down the two parcels that go into this wine: one with 100-year-old and the other with 35-year-old vines. The shallow soil of sand and decomposing stones gives the vines easy access to the bedrock, creating firm wines with more grip and acidity than in Morgon.

SOLD OUT
Guy Breton’s principal wine, the Morgon “Vieilles Vignes” is sourced from 2.5 acres of 80 year old vines in the Saint Joseph and Grand Cras subzones of the appellation, which give fine, stony wines. A high-lying sandy parcel contributes more complexity, structure, and acidity to the blend. After fermentation, the wine is aged on fine lees in Burgundian barrels (of at least the third passage).