Stop by this Saturday to taste one of the world’s great wines and enjoy serious discount prices.

A checklist of the great wineries of Rioja will always include the historic estate of Marqués de Murrieta and a checklist of great wines of Rioja will always include their Castillo Ygay Gran Reserva Especial. There are few Rioja wines that can match the elegance and power of Marqués de Murrieta’s most venerated label only made in the best vintages. Although 2007 was a difficult year due to a mildew attack that destroyed a large percentage of the fruit there is no loss of concentration. Aromas of cherry and plum eventually turn into a leather satchel full of spices. A mouthful is full and rich but not heavy, with a superbly incorporated structure of acid and tannin. There is vitality and also a whisper of ancient things. Compared with the 2005 vintage perhaps there is even more of a freshness that balances all the ripe fruit. 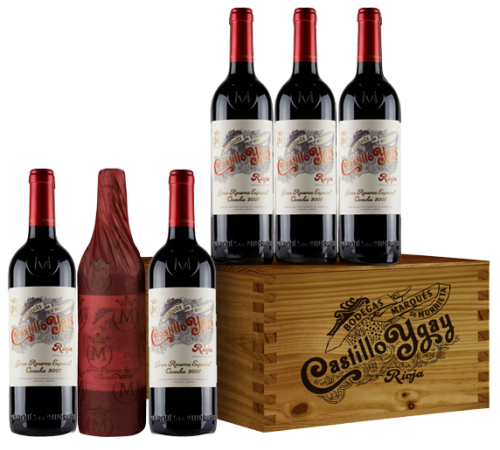 2007 Castillo Ygay is a blend of 86% Tempranillo and 14% Mazuelo (aka Carignan) from “La Plana,” their finest single vineyard site at 485 meters elevation. The wine was aged for 28 months in 225 liter oak barrels, with the first 10 months in new oak (French oak for the Mazuelo, American oak for the Tempranillo). Before bottling and just after the final blending, the wine settled in concrete vessels and then spent three years in bottle before release. While drinking fantastically 10 years after vintage, Castillo Ygay is a true “vin de garde” that will develop in a proper cellar over decades.

The Marqués de Murrieta bodega is located east of the city of Logroño in the western subzone of Rioja Alta, just south of the poplar-lined River Ebro. The immense wall of the rocky Sierra de Cantabria to the north holds the Atlantic winds at bay. Where the grand hillsides aren’t covered in vines there are handsome pastures for cattle and sheep. Scattered about are thickets of juniper, boxwood and holly. Oak, beech and pine grow in the highlands.

Besides its role as the capital of La Rioja, the city of Logroño is the center of the wine trade there. It’s also diverse with shopping, nightlife and, of course, food. It seems every sit-down restaurant there offers roasted lamb scented with dried vine shoots that are periodically thrown onto the fire. We figure the wine pairing is obvious. 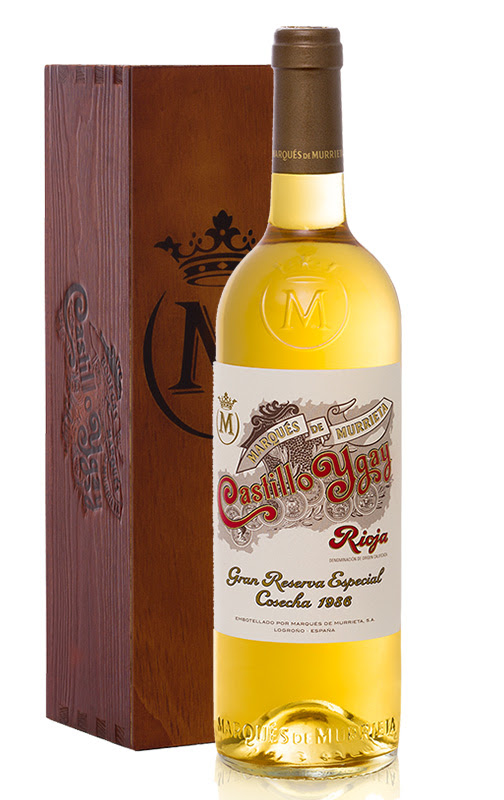 One of the greatest white wines ever produced in Spain is now available in tiny quantities. Although the 1986 vintage of Castillo Ygay Blanco had a limited early release bottled in 1992, most of it remained unbottled and was kept at the winery, where it rested in oak for 21 years, followed by six years in cement vats. You might think a white wine that has aged over 30 years past its harvest might taste a little old. It’s actually quite the opposite. This wine is still in its youth. Robert Parker’s Wine Advocate writer Luis Gutiérrez (who awarded the wine 100 points) claims this wine likely has another 50 years of prime drinking, if not longer.

The wine was produced mostly with Viura grapes and a touch of Malvasía Riojana. It’s a challenge to convey the character of this wine through words. It’s powerful, there is no doubt, yet it also possesses an elegance that could only come with age. The flavors and aromatics are like a harvest season grocery cart filled with orchard fruits, lemon curd, honey, hard-shelled nuts, flowers, mushrooms, we could go on, and the wine does go on, with an epic, mineral, salty finish that lingers long into the sunset.