If you’ve ever bought wine from Elie Wine Company you probably already know that we’ve had a decades long relationship with Kermit Lynch. Back before he became broadly known as one of the top importers of French and Italian wine, we were carrying many of his producers that would also go on to world-class status. Kermit shows no signs of stopping and we are just as impressed with the new producers he is representing. 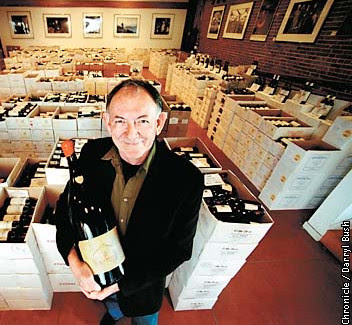 Kermit was raised in San Luis Obispo, California but his name has become synonymous with French and Italian wines. Attracted by the Old World wine cultures of Europe, in the early 1970s Kermit became a retailer, distributor, and national importer for authentic wines that express their terroir. Much like his close friends, the late food writer Richard Olney and Chez Panisse’s founder Alice Waters, Kermit’s influence has been enduring. He has had so much success shining the spotlight on small, artisan producers that he has won two James Beard awards and was knighted by the French government with their prestigious “Legion d’Honneur.”

Stop by the shop on Wednesday September 6, between 5:30 and 7:30 to taste some of the fantastic wines of the Kermit Lynch portfolio. Kermit’s son, Anthony Lynch, will be here to present the wines and provide insight into the producers and their specific regional climate and vineyard characteristics.

If you’re unable to make Wednesday’s tasting perhaps you can swing by on Saturday when we’ll be tasting the 2015 vintage of one of Kermit’s top producers in the Côte de Nuits, Régis Bouvier.