Less than 20 miles from the border of Switzerland, the upper Adda valley of Lombardy is a unique habitat for Italy’s northernmost wines produced from the Nebbiolo grape variety (locally known as Chiavennasca). The Valtellina zone stretches above the small, alpine town of Sondrio across terraces exposed to the south on pebbly soils of siliceous clays. Day-night temperature fluctations can be sharp in the summer but air currents from nearby Lake Como have a moderating effect that allows for slow, even ripening in the durable reds produced there. 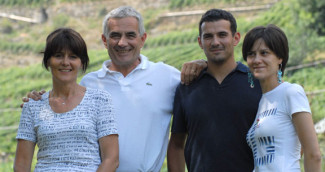 Azienda Agricola Fay has long been a firm believer in the potential of the Valtellina sub-zone of Valgella, enhancing their holdings by meticulously preserving older vineyards and making daring investments. Founded in 1973 by Sandro Fay, today the estate is run by Sandro’s son, Marco, whose agronomic research has always paid close attention to the effect of altitude on the quality of the wines. They are committed to promoting single vineyards that produce wines with distinctive characteristics.

The six acre Cà Moréi vineyard is located at close to 1700 feet elevation. The grapes (100% nebbiolo) are hand-harvested in the second half of October. After two weeks fermentation in stainless steel tank the wine is aged for 12 months in barriques. The result is loads of rich forest berries with a structure and freshness like no other nebbiolo-based wine we’ve ever had.