Modern Rioja’s story begins around 1850 when landowner Luciano (eventually the Marqués de) Murrieta, who had studied winemaking in Bordeaux, rented a Bodega in the town of Logroño and put his wine into well-coopered wooden casks. Locals sneered at this practice as they believed it was an unneeded and particularly expensive, yet the wine improved in the barrel.

Today, there are few Rioja wines that can match the elegance and power of Marqués de Murrieta’s most venerated label only made in the best vintages, Castillo Ygay Gran Reserva Especial. The 2005 is a blend of 89% Tempranillo and 11% Mazuelo (aka Cariñena) from “La Plana”, their finest single vineyard site at 485 meters elevation. The wine ages for a period of 30 months in 225 liter oak barrels, with at least 10 months in new oak. It then matures for a further two years in bottle before being released. Luis Gutierrez of Robert Parker’s Wine Advocate calls the 2005 Castillo Ygay “a classic among classics” and “a true vin de garde which develops complex notes of violet and meat with time in the glass.” The Peñín Wine Guide says it’s the best 2005 Gran reserva of Spain and gives it a robust 95 points (if you’re keeping score).

The Marqués de Murrieta bodega is located in the western subzone of Rioja Alta just south of the poplar-lined River Ebro. The immense wall of the rocky Sierra de Cantabria to the north holds the Atlantic winds at bay. Where the grand hillsides aren’t covered in vines there are handsome pastures for cattle and sheep. Scattered about are thickets of juniper, boxwood and holly. Oak, beech and pine grow in the highlands.

Besides its role as the capital of La Rioja, the city of Logroño is the center of the wine trade here. It’s also diverse with shopping, nightlife and, of course, food. The Calle del Laurel and surrounding streets are crammed with over 50 tapas bars each specializing in only two or three unique bites. The local nickname for the tapas circuit is La Senda de los Elefantes, or the Trail of the Elephants, because of the way people walk if they’ve done all the bars. It seems every sit-down restaurant there offers roasted lamb scented with dried vine shoots that are periodically thrown onto the fire. We figure the wine pairing is obvious.

Stop by the shop this Saturday for a taste. 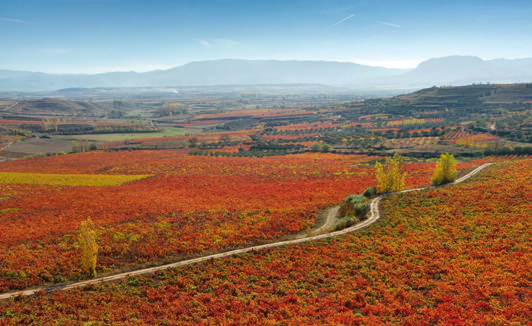