Jacquesson Cuvée 736 – A Champagne of Textural Elegance and Class

Although technically a Champagne “House”, brothers Laurent and Jean-Herve Chiquet operate Jacquesson much like a “Grower” operation. Besides their own organic and sustainably farmed 77 acres of vineyard (severely pruned for low yields), they work closely with their neighbors to supplement from an additional 27 acres, all in Grand Cru and Premier Cru areas. 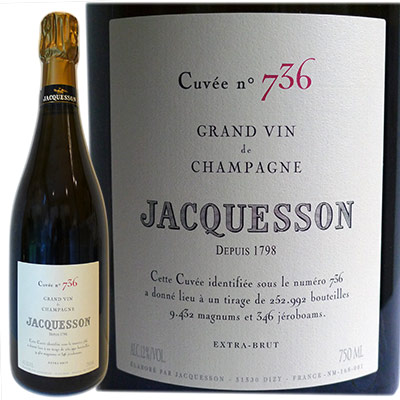 While most non-vintage Champagne is made up of several individual vintages blended with uniformity in mind, the aim of Jacquesson’s 7-Series is to emphasize the best qualities of a given year. The new release of 736 is based on the 2008 harvest with about 34% of the blend made with reserves from 2007 and 2006. It’s composed of 53% Chardonnay, 29% Pinot Noir and 18% Meunier.

The spring of 2008 was rather chilly and wet followed by a dry and cool summer. There was a relative shortage of warm days throughout the growing period but the grapes eventually ripened under excellent conditions with musts that were rich in sugar and having excellent acidity. 2008 is set to be the best year in Champagne since the superlative 2002. Because the Chiquet brothers thought Cuvée 736 tasted best at just 1.5 grams per liter of dosage it is thus labeled extra brut.

Antonio Galloni of Robert Parker’s Wine Advocate gives it 94 points and declares, “The NV Brut Cuvée 736 is outrageously beautiful. Wonderfully alive and vibrant in the glass, the 736 exudes energy, tension and class, all hallmarks of 2008, the base vintage for this release. Dried pears, crushed flowers, anise and mint develop in the glass, but ultimately, the 736 is really a wine of textural elegance and class. With each passing vintage the 700-series wines seem to keep getting better. Simply put, the 736 is one of the top wines in Champagne. And its price? Very reasonable for the quality of what is in the glass. If I were going to buy only one mid-tier Champagne by the case, this would be it.”

I guess he likes it almost as much as we do.

Stop by the shop this Saturday for a sample.