Moulin-à-Vent is to the ten crus of Beaujolais what Moulin Rouge is to Parisian cabarets: First among equals. Of course, that equality is a matter of taste—some consumers prefer floral Fleurie or charming Chiroubles to the full-bodied, tannic-structured Moulin-à-Vent and it’s no secret Georges Dubœuf sells a hundred thousand cases of Beaujolais Nouveau a year.

Forgetting the forgettable and concentrating on the myriad styles of Cru Beaujolais, nowhere is the evidence of terroir—the site-specific contributions of geology, sun-exposure and rainfall—more obvious than in Moulin-à-Vent. Although each appellation works with a single grape variety, Gamay, the results range from light, glorified rosé to densely layered, richly concentrate reds that rival Burgundian Pinot Noir cousins from the most storied estates. Moulin-à-Vent is unusual for a number of reasons, and among them is the fact that there is no commune or village from which it takes its name. Like the Moulin Rouge, the appellation is named for the ‘moulin’—windmill—that sits atop the hill that overlooks the south- and southeast-facing vineyards. 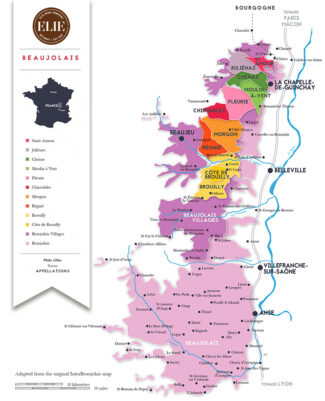 The most outrageous reality of the Cru, however, is that the wine owes its structure and quality to poison: Manganese, which runs in veins throughout the pink granite subsoil, is toxic to grapevines when present in soil at excessive levels and results in sickly vines that struggle to leaf out and produce small clusters of tiny grapes. It is the concentration of the juice in these grapes that gives Moulin-à-Vent a characteristic intensity unknown in the other crus of Beaujolais, where Manganese is not present. It also gives the wine the foundation of phenolic compounds required for age-worthiness; Moulin-à-Vent is among a very select few of Beaujolais wines that can improve for ten, and even twenty years in the bottle ending up with a magnificent cherry-red color – a color that demonstrates the ability of this cru to “pinoter” with age. That French term simply means that they slowly develop a bouquet similar to Pinot Noir, known for its intense ripe fruit notes. 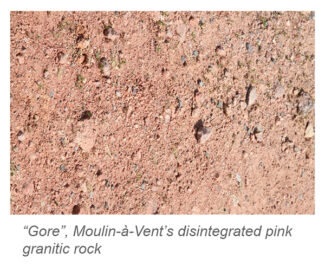 2018 Vintage: Rich with Breath of Freshness

A cold and rainy winter was followed by a warm, dry summer; the first quarter of 2018 was the most humid experience in Beaujolais since 1964. As a consequence, mildew spread fast, but in May and June, sunny conditions saw the condition evaporate. In Beaujolais a condition known as “La fleur a coulé” developed, meaning that the clusters were long, loose, with some millerandagereported (due to the wet spring) and required extensive sorting after harvest. Overall, it is reported to be a powerful and elegant vintage due to the small, concentrated fruit.

Sharp April frosts cut yields throughout the region. The summer then heated up, with reports of temperature highs exceeding 104°F. Drought further cut into yields, and hailstorms struck in mid-August, concentrating the fruit that remained on the vines. Although a heartbreaking loss to farmers, the resulting wine is very intense with nicely balanced acids and Rhône-like aromas. The top estates produced cellar-worthy gems—a marvelous representation of what the appellation can offer.

This 6-bottle pack contains two bottles of each of the following three featured wines at $238 including tax.

Château du Moulin-à-Vent has a history as unique and fascinating as the wine. In the late 1700s, Philiberte Pommier discovered that certain plots on her estate yielded better wines than others, and set out to understand the geology that underscored a self-evident truth. She began to tailor her winemaking to individual lieux-dits in her property (then called Château des Thorins), and in 1862, Pommier’s wines were deemed the best in the Mâcon region at the Universal Exhibition of London. At the time, Philiberte Pommier was 99 years old.

Today, the estate encompasses nearly a hundred acres and covers some of the appellation’s finest climats—Les Vérillats, Le Champ de Cour, La Rochelle—with an average vine age of over forty years. The pink granite soil is rich in iron oxide, copper and manganese, and since 2009, under the new ownership of the Parinet family, investment in the winemaking facilities and the vineyards has resulted in plot-specific signature wines. 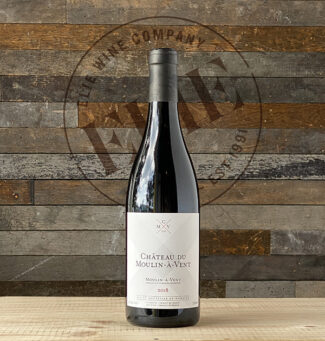 Château du Moulin-à-Vent, Moulin-à-Vent 2018 ($40): Three unique terroirs on the estate are blended to create this luscious flagship wine: “Les Thorins” is an iconic south-facing plot, “Le Moulin-à-Vent” looks eastward and “Aux Caves” is rich in silica with 80-year-old vines. The wine is deep red color with purple tints and lovely aromas of wild berries, hints of cardamom and flowers; notably rose, peony and violates with spice reasserting itself on the finish.

Winemaking has been the legacy of the Liger-Belair family for a quarter of a millennium. Prior to establishing his own domain, Thibault Liger-Belair studied oenology and viticulture for six years, worked for a communications firm in Paris and started an internet company to discover and sell high quality wines. Still, the vines beckoned, and in 2001, at the age of 26, he returned to them. The following year saw his first harvest of Nuits-Saint-Georges, and in 2003, he expanded into Richebourg Grand Cru, Clos Vougeot Grand Cru and Vosne-Romanée Premier Cru Petits Monts. In 2009, he ranged farther afield, into Beaujolais, and now produces Beaujolais-Villages and several Moulin-à-Vent wines.

The soil in his Moulin-à-Vent property is shallow (less than 20 inches deep) and composed primarily of granitic sand and quartz, and about half the vines of the 35 acres were planted between 1910 and 1955. His signature wine, for this reason, is ‘Les Vieilles Vignes’—’The Old Vines’.

Domaine Diochon is so close to the iconic windmill that the leaves of the vines are stirred by the breeze it creates. Nearly as famous as the mill is the heavy, curing Teddy-Roosevelt-mustache of the proprietor, Bernard Diochon, who took over the estate from his father in 1967. In waxing philosophically about his terroir, he references ‘crumbly granite soil that allows the vines to plunge easily towards gore subsoil, which feeds the vines, while adding a pronounced mineral component to the wine.’ For the geologically challenged, ‘gore’ is an accumulated mass of sand and thin clay deposits with weathered feldspars, mica, and quartz.

Creating wine from vines between forty and a hundred years old, Diochon is a fan of the specific qualities of the tannins in wines from Moulin-à-Vent, which are unique to the appellation. “I like tannic wines without heaviness; with fruit and floral aromas. I don’t like weighty wines with hard tannins. My favorite wines are Saint-Émilion from Bordeaux, and Chambolle-Musigny and Nuits-Saint-Georges from Burgundy. Every vigneron naturally chooses to make wines in the style they prefer.”

In this, he is as good as his word, having established the benchmarks of his house style: Harvesting only when the grapes are perfectly mature, using (of course) traditional whole cluster fermentation, aging in large old oak foudres and bottling unfiltered in the springtime. 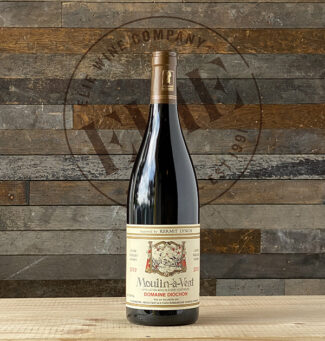 Domaine Diochon ‘Vieilles Vignes’, Moulin-à-Vent 2019 ($26):  Notes by the importer: “Juicily delicious yet there is majesty to it. It is full-blown and full-bodied, yet it has a lush, supple texture. No hard edges. No astringency. No heat. The color, like the flavor, is cassis-like. Diochen’s wild moustache looks as if it has seen the inside of a million wine glasses, and it’s hard to imagine a world without wine like this.”