If you’ve enjoyed a Spanish wine from our shop it more than likely came from a local, Detroit-based enterprise that has collected a portfolio of distinguished, passionate producers from some of the most exciting wine production regions in Spain. Vinovi & Co. is led by Núria Garrote i Esteve.

Born and raised in Barcelona, importer Núria Garrote i Esteve has extended her cultural fluency across many continents and in multiple languages. She first moved to Detroit in 2005 to work in automotive industry, where, armed with a degree in Mechanical Engineering from the Universitat Politècnica de Catalunya, she forged a career with some of the biggest suppliers in the city.

You can take an engineer out of Catalunya, but you can’t take the mystical lure of the region out of the engineer: With an abiding love for her native land and an undying respect for the ‘maestros’ that create the signature wines of Catalunya, Núria launched her import company in order to bring the best of them to her new home in Michigan. Her self-described mission has been to represent an elite group of trailblazing Franco-Iberian winemakers, and her portfolio has been painstakingly assembled after numerous visits to wineries, through walking the vineyards and learning the nuances of the land, the fruit, and above all, the winemakers. “There are as many points of view articulated through wine and cultivation techniques as there are good wines. My producers are as different from each other as their farms.”

Although Núria is steadfast in her vow never to tailor a wine to suit the peculiarities of a market, the barrel-select wines in this package so impressed her that the winemakers graciously allowed her to import them under the name of daughter Ona. Then only 5, the original labels were written in Ona’s own hand.

Wine people tend to like lists, so here’s a short one: Appellations that produce superlative wines based on Grenache (Garnacha in Spanish; Garnatxa in Catalan). There’s Châteauneuf-du-Pape, and in Navarra there’s Domaines Lupier… and there is Priorat. 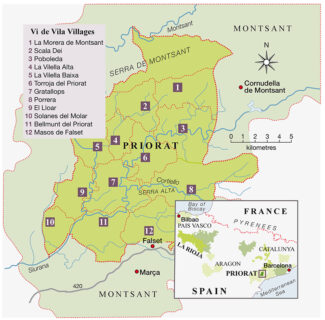 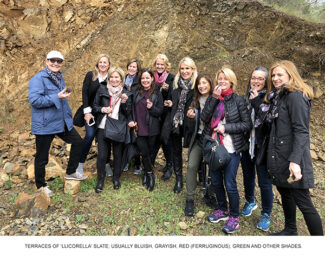 And now for a much, much longer list: The reasons why Priorat’s dry, dusty wine-growing region is so remarkable. Covering 11 parishes located inland from the city of Tarragona in northern Spain, Priorat is engulfed nearly entirely by the Montsant DO (Denominación de Origen), but enjoys specific geological and climactic conditions similar to Andalucía on Spain’s opposite corner. The difference is the soil; in Priorat, it is slate and quartz in the process of breaking down into constituent minerals, and these show up in the wines, giving it a pronounced and identifiable minerality. Priorat’s soil is known locally as ‘llicorella’; it is shiny-black and fine-grained in appearance and is notoriously poor for most agricultural endeavors as it does not retain water and offers little in terms of plant nutrition. But as we learned in Viticulture 101, this sort of earthen foundation is ideal for producing wonderful wines since the vines struggle and fuss and yield grapes reluctantly, and these tend to be small and the juice highly concentrated. Farmers further reduce yields by various techniques in the field and appellation regulations are particularly stringent in Priorat; the Spanish average for grape yields is around two ton per acre—in Priorat, it is one-fifth of that.

Priorat – Vi de Vila Masos de Falset Red 2016 ($72)
‘Petitona’ means ‘Little Ona’—indeed domain size of the wine’s namesake Ona, only seven years old in 2016, is 3.5 acres planted to 3,200 vines. Located in the DO Montsant village of Falset (where both DO Montsant or DOCa Priorat wine can be produced depending on the soils of the vineyards), winemaker Blai Ferré’s style has evolved to reflect the terroir’s dazzling complexity. ‘Vi de Vila’ (the wine of a specific municipality) was formally approved by the Spanish Regulatory Council in 2009 and is meant to be the official confirmation of what wine lovers have always known: That the expression of wine varies from town to town.

Petitona is equal parts traditional Catalan Garnatxa and a variety known as Garnatxa Peluda—‘Hairy’ Garnatxa—because the vine leaves are covered in fine hairs that make it drought resistant. Perfumed rather than floral, the wine shows an earthen nose with baking spice and especially, a touch of licorice-ash from which the soil llicorella gets its name.

Priorat Red 2017 ($19) The first collaborative effort between Núria Garrote and Blai Ferré was in 2013; Blai himself fell in love with winemaking while a teenager working the ﬁelds with Alvaro Palacios, one of the leading winemakers not only in Priorat, but all the world. He then purchased two small lots of his own, about 12 acres worth of land from which he produces a scant 5,000 bottles of Ona per year, bottling the rest of the harvest in two other cuvées; the 2017 is a blend of Garnatxa, Syrah, Carinyena and a splash of Cabernet Sauvignon.

Cultivation is organic and the harvest is hand-picked and hand-sorted. Half of the wine is aged in stainless steel vats and the other half in French oak for eight months. Blai likes being self-sufﬁcient and doing everything himself and most of his time is spent working with his father-in-law at Celler Cecilio, the oldest winery in Priorat.

Ona is Priorat in the raw, with little elaboration, merely the core of great fruit showing the potential for creating the type of wine Priorat has become known for: Upscale wines intended for the cellar that reveal an insight into time and place after years of development.

About an hour south of Barcelona, nestled splendidly between the mountains and the sea, Penedès is most active growing region in Catalunya. The region contains some of the oldest wine-growing appellations in Europe, and produces consistently and reliably thanks to a multitude of terroirs. The region is best known for Cava, Spain’s answer to Méthode Champenoise sparkling wine, generally produced from the trinity of indigenous grapes, Macabeu, Parellada and Xarel·lo, occasionally fattened-up with Chardonnay, Pinot Noir, Garnatxa and Monastrell. All are permitted in various concentrations for Cava blends.

Roughly divided into three subzones, the mountainous Alt-Penedès produces the highest quality wine, followed by Baix Penedès in the low-lying coastal areas and Penedès Central, responsible for most of the region’s bulk production.

Although the area has been making wine since the days of the Phoenicians, Penedès’ modern era began in 1960 when its DO designation was granted, and—largely through the efforts of Miguel Torres—the region as a whole began to upgrade production methods, including temperature-controlled fermentation in stainless steel tanks and experimentation with non-indigenous grape varieties such as Merlot and Cabernet Sauvignon. Since then, although quality has skyrocketed among all the wines of Penedès, the region remains known primarily for its sparkling wines, making the highly regarded, oak-aged reds and crisp, vibrant whites (especially those made with the Cava standby Xarel·lo) part of a remarkable journey of discovery. 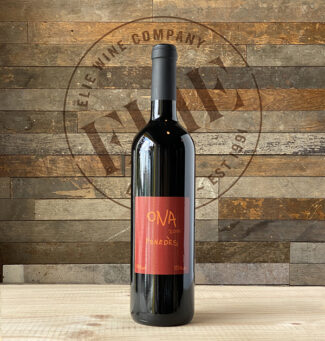 Penedès Red 2015 ($15) Another winemaker whose visionary approach impressed Núria Garrote is Raimon Badell of Masia Can Tutusaus, whose award-winning Cava she imports. During one trip, she tasted a unique red wine produced only for Raimon and his friends; the grape used was called Marselan, a variety created in 1961 by crossbreeding Cabernet Sauvignon with Grenache. Originally, it was intended for use in Languedoc, but yields proved too low for commercial viability.

Even so, Núria recognized that wine displayed the exuberant red fruit of Grenache and the elegant structure of Cabernet Sauvignon, and saw it as a fitting addition to her custom Ona line. Raimon believes in making contemporary wines that respect Mediterranean culture without becoming mired in convention. Certified biodynamic in Spain, he has the utmost respect for his vines and soil and it shows in every glass.

Penedès 2019 White ($15) Over the past 20 years, producers have been experimenting with various incarnations of the indigenous grape Xarel·lo; the mountainous sub-zone of the Massís del Garraf possesses a terroir and microclimate perfectly suited to it and beyond its Cava face, it produces a vibrant still wine with signature aromas of green apples, dried flowers and crisp citrus rind.

Naturally high in acidity when grown at high Penedès altitudes, freshness of the varietal is neither elaborated upon nor hindered in its expression by Raimon Badell. To Badell, less is often more, and the wine is a beautiful introduction into the intense aromatics, yellow fleshy fruit and exuberance that the variety has to offer.