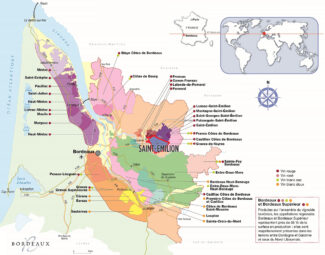 In Bordeaux, Cabernet Sauvignon is the duke of the manor while Merlot is the duchess, and if these terms sound antiquated in 2021, be assured that the traditions of the region are delightfully established. And nowhere in Bordeaux is this genuflection to history more obvious than in Saint-Émilion, which is speckled with Roman ruins and at whose center stands a limestone church built by the region’s namesake, Saint Emilian of Lagny.

Saint-Émilion was the first region in Bordeaux to export wines and boasts the oldest wine society in France: The Jurade of St Émilion, formed in 1199. The vineyards are numerous and small, averaging around fifteen acres and spread across a triad of terroirs that can be roughly defined as a central limestone plateau, the clay and chalk-rich slopes of that plateau and the flatland beyond. What all three topographical areas have in common is cooler soils better suited to Merlot and Cabernet Franc. For the most part, Cabernet Sauvignon does not ripen well in Saint-Émilion except in small pockets, most notably on an ancient alluvial terrace in the northwest, where free-draining gravel soils are similar to those found in the best properties of the Graves and Médoc.

2018 represents a vintage in which Saint-Émilion producers snatched victory from the jaws of defeat; ‘Forbes’ wine writer Tom Mullins refers to it as a ‘dark star vintage’, meaning that it is powerful with profoundly deep black fruit flavors integrating beautifully with acidity.

An unusually wet spring produced more rain than the appellation usually receives all year, leaving the vines susceptible to mildew and a prevailing fear that the harvest might be doomed. But a sunny June and a balmy July dried things out as the summer developed into the hottest since 2003 with no substantial rainfall until after harvest. Vignerons were able to pick at their chosen level of maturity and optimal phenolic ripeness was achieved throughout the appellation. 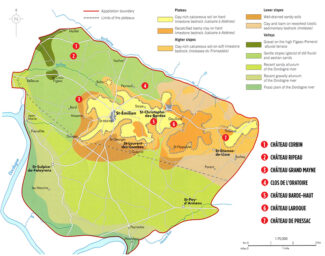 Politically correct connoisseurs may roll their eyes when Merlot is referred to as ‘feminine’, but the line of succession at Château Corbin is unabashedly woman; it has been passed from mother to daughter for multiple generations. Anabelle Cruse-Bardinet is the current owner, and produces silken, sensuous and supple wines from older vines that are, for the record, 92% Merlot. The Cabernet Franc that makes up the rest is often fermented in large glass amphora, and the 18 stainless steel tanks ranging in size from 40 to 80 hectoliters allow for parcel by parcel vinification. The terroir is neatly split between clay-heavy soil peppered with iron deposits and sand and gravel.

It’s said that good fences make good neighbors, but if they share good terroir, the rest is immaterial. As such, Château Ripeau’s 40 acres, bordering Pomerol, share breathing air with Château Cheval Blanc, Château Corbin and Château La Dominique, yielding grapes from a similar aggregate of sand, gravel, limestone and iron-infused clay. In December, 2014, Jean and Françoise de Wilde sold Château Ripeau to Cyrille and Nicolas Grégoire, sons of James Grégoire, best known as the previous owner of Fronsac’s Château La Rivière. The brothers have hauled the estate into the 21st century, upgrading the facility, switching to organic farming and replanting 40,000 feet of vines to better densities with improved drainage and more diligent pruning, making them among our favorite folks in the neighborhood. 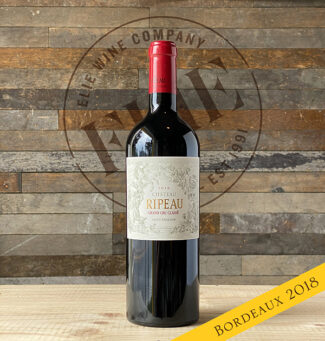 2018 Château Ripeau, Saint-Émilion Grand Cru Classé ($50) is deep and brooding with aromas of plum, black cherry, and dark earth wending a path through a complex and layered palate. Graphite, toast, and cherries intermingle with minerals and elegant, soft tannins; the opulent fruit is seamlessly integrated and with enough backbone to carry it through the next decade and beyond.

The Saint-Émilion estate of Grand Mayne is driving a Cabernet Franc steamroller; the 40 acres are currently planted to 78% Merlot, 19% Cabernet Franc and 3% Cabernet Sauvignon, but the plan of the Nony family (who has presided over Grand Mayne since 1934) is to add Cab Franc vines until they make up 35% of the total. This vineyard is located in a single block to the west of the village of St. Émilion, at the foot of the plateau. The vines that creep up the slope (bordering Château Beau-Séjour Bécot) are planted in clay/limestone soil, and in the portion that extends across the flats grow into a layer of sand that offers better drainage—a plus when the season begins with a damp overture, as it did in 2018. 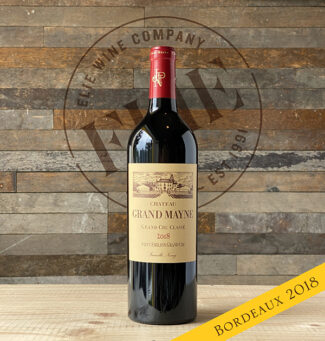 ‘Fronsac Molasse’ sounds more sophisticated than ‘sand over clay’, but either way, it’s perfect ground to nurture Merlot vines, and as such, 80% of l’Oratoire vines are of that variety. Once a part of neighboring Château Peyreau, l’Oratoire is relatively new kid on the block, especially compared to Saint-Émilion estates with roots delving through centuries. Peyreau split in two around the time of the Saint-Émilion classification (1955), and both properties were purchased by Joseph-Hubert Graf von Neipperg, the father of the current owner, Stephan von Neipperg. At around thirty acres, the estate is farmed with stainable viticulture methods, without herbicides or pesticides. 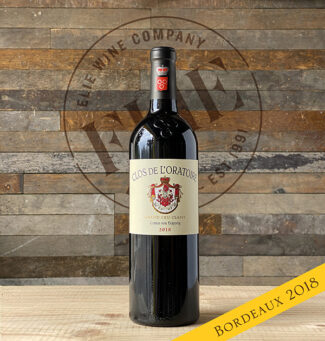 Shored up by more than 250 years of history, Sylviane Garcin-Cathiard (who purchased Barde-Haut in 2000) felt confident in steering the estate toward the next quarter millennia. That involved a modern, minimalist remake of the winemaking facility by Paris architect Nadau Lavergne along with a ‘green roof’ with solar panels, filters to collect and recycle rainwater and a small wind turbine to create outdoor lighting. Meanwhile, the terroir continues to produce—the best sits atop the plateau where clay is layered above chalk soils and limestone. 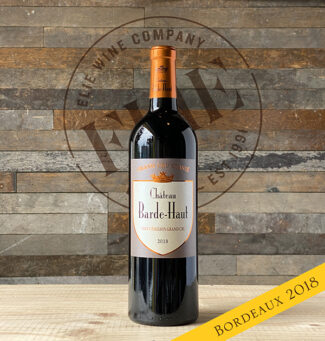 2018 Château Barde-Haut, Saint-Émilion Grand Cru Classé ($53) boasting 80% Merlot and 20% Cabernet Franc, the wine is beautifully balanced with a wonderful sense of purity and elegance; ripe black cherry and blueberry fruits alongside medium to full-bodied aromas and flavors of chocolate, spring flowers, violets and a kiss of chalky minerality.

Laroque is the biggest estate in Saint-Émilion and perhaps the grandest; they refer to themselves as ‘a paradise of limestone’. Laroque’s terroir is irreplaceable, but it is the human touch that has carried this iconic château from a bulk producer to ‘Grand Cru Classé’ and the estate is happy to name names: First, Paul Boisard, the 19th century estate manager who brought Laroque wines to the attention of the Bordeaux négociants with a gold medal at the 1900 Paris Universal Exhibition; then Bruno Sainson, who oversaw thirty vintages and lifted Château Laroque to the rank of Saint-Émilion Grand Cru Classé; and of course, current manger, oenologist David Suire, who (with a team of 19) has been tasked with preserving the Laroque heritage while embracing the challenges the future of the industry holds. 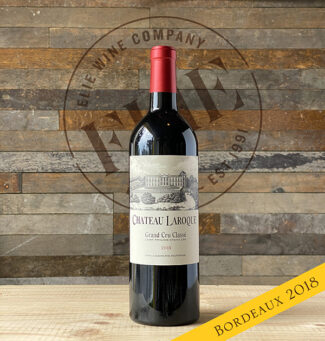 2018 Château Laroque, Saint-Émilion Grand Cru Classé ($42): 97% Merlot and 3% Cabernet Franc; it bursts from the glass with flamboyant notes of stewed black plums, Black Forest cake and boysenberries, plus hints of candied violets, star anise and unsmoked cigars with a playful waft of sassafras.

The medieval fortress of Pressac has been making wine since 1737, and back in the day, was so committed to the Auxerrois grape that it was renamed ‘Noir de Pressac.’ It is still grown on the estate’s hundred acres, but today it goes by the name of Malbec. (It’s also known as ‘Côt’ in Cahors, where it is the dominant variety).  Pressac is unique in Saint-Émilion in that it reserves vineyard space for all six of Bordeaux’s allowable varieties, with 69% on the vineyard devoted to Merlot, 18% to Cabernet Franc, 9% to Cabernet Sauvignon, 2.5% to Malbec, 1.5% to Carménère and 1% to Petit Verdot. The confluence of all three of the appellations soil types makes this possible; the limestone plateau on which the château sits yields to a clay-limestone slope surrounding the hill and at the foot of the slope, silty clay-limestone, each occupying equal parts of the estate.