The languid Loire is the longest river in France, and its winemaking locus, occasionally interspersed with cereal crops, covers almost 200,000 acres. Originating in the south—virtually in the Rhône appellation—the river scrambles up through Orléans and hooks toward Tours in the country’s heartland. It is along this final leg, tracing the Loire’s path to the Atlantic, that some of the country’s most heralded wines are born; wines that, during the Middle Ages, were even more highly prized than those of Bordeaux or Burgundy. With a few exceptions, these wines were white, and those of Pouilly Fumé and especially Sancerre have earned a reputation as world ambassadors for French Sauvignon Blanc. As the climate warms, however, more attention is being focused on the Pinot Noir-based reds and crisply aromatic rosés that the Central Loire is increasingly able to produce. 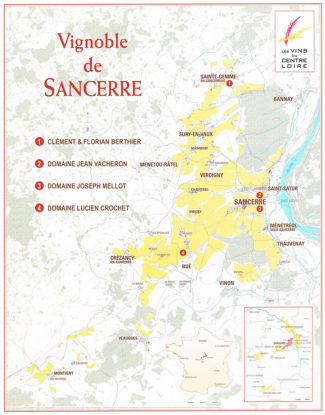 Separated only by the width of the river, Sancerre overlooks Pouilly Fumé with a sort of supercilious smirk. Sancerre’s interpretation of Sauvignon Blanc tends to more finessed, showing less minerality and more fruit than Pouilly Fumé, less flint-spark smoke and more flowering herb aromas and tastes without being as aggressively citrusy or grassy. This is a generalization, of course. Sancerre is comprised of a varied geology, and wines from individual terroirs express one-of-a-kind characteristics. To the east, flinty soils produce wines of almost steel-like elegance and austerity; the central vineyards are chalky and the wines are more floral and delicate and almost Chablis-like, while in the gravelly northwest, Sancerre tends to reflect an array of unusual fruits, many exotic—passion fruit, quince and lychee. All three plead a pretty respectable case that— Marlborough, Willamette and Graves notwithstanding—Sancerre is Sauvignon Blanc’s purest sanctuary. In ways, throughout Loire’s culture, purity is the hallmark, and the folks who live here are reputed to have the purest of all French accents.

Sancerre wishes for a Happy Mother’s Day with a 6-Bottle Pack ($298, All Included) of each of the Central Loire Sauvignon Blanc & Pinot Noir: White, Red …. and Rosé

With over a hundred biodynamically-farmed acres and vines with an average age approaching half a century, Vacheron is one of the elite properties in Sancerre and cousins Jean-Laurent and Jean-Dominique Vacheron are among the top artisan winemakers in the Loire. Focused on single vineyard sites while hand-harvesting fruit, the Vacherons have produced primarily Sauvignon Blanc, but are also winning high marks for the twenty-five acres of chalk and silex that they have planted to Pinot Noir. These reds undergo malolactic after primary fermentation in foudres and neutral barriques, softening the acids and showcasing the fruit. The two wines in the package are exemplary both of the Vacheron style and of the appellation. Sancerre White 2019 ($46)displays a bright bouquet of Bosc pear, lime and dried yellow flowers and a rich, mouthwatering palate of citrus and sage with an edge of minerality. Sancerre Red 2018 ($56) highlights the warm vintage, which was especially kind to Pinot Noir, and produced a full-bodied wine that reflects warm cranberry, strawberry compote and tart cherry notes along with taut tannins that form a supple backbone. 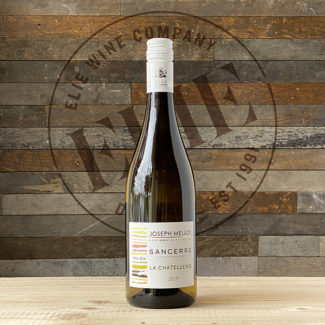 Domaine Joseph Mellot is unique as the only estate in the Central Loire to own vineyards in all the appellations—Sancerre, Pouilly-Fumé, Pouilly-sur-Loire, Coteaux du Giennois, Menetou Salon, Quincy, Reuilly and Châteaumeillant. Founded in Quincy in 1513, it has been associated with quality Sancerre for over five hundred years. Under the leadership of Catherine Corbeau-Mellot, who has been up-shaping her wines on the path of excellence for the past thirty years, the property has established modern innovations where appropriate, while maintaining its half-millennia of tradition. ‘La Chatellenie’ Sancerre White 2019 ($26) is grown on ‘typical’ flint-rich Sancerre soils, and displays a lively, lovely green apple nose above a core palate of gooseberries, melon, spearmint and nettles. The warm summer of 2019 allowed the fruit to ripen in a lushness that rounds off the bracing acidity that Sauvignon Blanc often expresses in the Loire.

A match made in Sancerre heaven? Lucien Crochet’s marriage to the daughter of Lucien Picard fused not only families, but wine estates; Crochet expanded the work of his father-in-law and, over the next forty years, grew the domain until it encompassed sixty acres of vineyards, nearly all in the village of Bué, but with smaller holdings in the neighboring villages of Vinon and Crézancy. Under the management of his son Gilles, Crochet’s vineyards are planted on shallow clay and limestone soil and on south-facing slopes of varying degrees of severity. The Sauvignon Blanc is fermented in stainless steel to preserve its freshness and clarity; the Pinot Noir macerates for thirty days before seeing 70% oak aging. ‘Le Chêne Marchand’ Sancerre White 2018 ($43) is a stellar example of Sancerre’s shivery, sculpted, steely character. Sharp, with intense minerality reminiscent of crushed rocks, it provides ample stone-fruit in the mid-palate to sweeten the tartness and finishes as clean as the air after summer rain. ‘Cuvée Prestige’ Sancerre Red 2015 ($83) is bright and rich, showing elegant blackberry and blueberry notes with soft vanilla wreathing the fruit’s silken tannins to form a foundation of sophistication and maturity.

Like many French wine estates, Domaine Berthier is a family affair. Founded in the early 1980s by Jean-Marie Berthier near Sainte-Gemme-en-Sancerrois, his wife’s hometown, the couple took over the Domaine de Montbenoit in the Coteaux du Giennois, one of the smallest AOPs in the Loire. The domain is now run by brothers Florian and Clément, who combined strengths to maintain sixty acres to their parents’ standards; Florian first honed his skills in vineyard management in Burgundy while his elder brother Clément studied winemaking in Canada and in the United States. Today, they produce a number of wines from a variety of terroirs, none more remarkable than that salmon-colored, fruit-forward Sancerre Rosé 2019 ($27), made entirely from Pinot Noir grown on slopes along the ancient river terraces at Gien. The wine is juicy and crisp with strong notes of peach blossom, honeysuckle and wild strawberry; a delightful afternoon sipping wine.