Not merely leftovers, Second Wines have always offered incredible value, but as the selection process for the First Wine or “Grand Vin” of these distinguished estates has gotten ever stricter, limiting supply and raising the price, today the best Second Wines offer an even greater value than in the past. It’s important to note that these Second Wines are always produced by the same winemaking team that produces the First Wine. Generally, the biggest differences are that Second wines see less new oak during maturation and are meant to be enjoyed closer to release than the First Wine. This is a great 6-bottle gift pack to drink over the holidays, you may even want one for yourself.

Included in the Top Bordeaux Château’s Second Wines are First Class package are one bottle of each:

The price includes tax and delivery, as well as a 10% discount. We will also honor a 10% discount on any bottles you might wish to add to the gift package.

Château Pichon-Longueville Baron is a classified “Second Growth” estate currently managed by Christian Seely. In 1987 it was purchased by the group which also owns the Châteaus Cantenac-Brown, Petit-Village, and Suduiraut. “Les Griffons de Pichon Baron” is a blend of 55% Cabernet Sauvignon and 45% Merlot that has been aged in 60% new oak barrels and 40% one-year-old barrels for 18 months. Sensual aromas of violets and cassis infused with cedar precede a medium-bodied palate with very fine tannin and purity. The deep gravel terroir of Pauillac shines out of a glassful.

The vineyards of Villemaurine have been producing mostly underachieving fruit for a couple of centuries. But it was the relatively recent purchase and subsequent investment in the property and cellars, including the hire of noted winemaking consultant Stéphane Derenoncourt followed by Hubert de Boüard de Laforest of Château Angélus, that has brought the estate to prominence. Saint-Émilion boasts the famous clay-based soils of “Right Bank” Bordeaux ideal for Merlot, and the Villemaurine bottling reflects this with a blend of 80% Merlot and 20% Cabernet Franc for a wine of abundant aromatics and ripe, concentrated fruit.

One of the smallest Grand Cru Saint-Émilion estates, Château Croix de Labrie is owned by the Courdurie family with Axelle Courdurie as the winemaker. The newly renovated cellars allow for everything to move by gravity. Some of the estate’s best limestone terroir is located near Château Pavie, with another prime clay-laden parcel close to Valandraud. Yields at Château Croix de Labrie are purposely kept low to increase concentration, which is evident in “Les Hauts de Croix de Labrie” produced from young vines from several plots. Simultaneously rich and fresh, the wine is a blend of 85% Merlot and 15% Cabernet Franc aged in French oak barrel (50% new, 50% one year) for 14 months.

Purchased by the Bonnie family in 1997 and completely modernized in 1998, Château Malartic-Lagravière uses sustainable cultivation techniques and was one of the first major estates in the region to use gravity to move the wine in the cellars. The estate is located on a high terrace that has been deeply scored by the Eau Blanche and its tributaries. “Le Comte de Malartic” is a blend of 45% Merlot, 45% Cabernet Sauvignon, 8% Cabernet Franc, and 2% Petit Verdot. A nose of black and red fruits, tobacco, and licorice precede a sip that is round with abundant silky tannins and an elegant finish.

One of the oldest estates in the entire Bordeaux wine region with a history dating back to the 12th century, Château Carbonnieux is one of the few Bordeaux estates to produce close to equal amounts of red and white Bordeaux wine. Right next door to the estate, their Second WIne from Château Tour Léognan is also prime real estate, as illustrated by their neighbors Château Smith Haut Lafitte and Château Haut-Bailly. The estate has recently added new, temperature controlled, stainless steel vats to allow vinification on a parcel by parcel basis. Today, Château Carbonnieux is considered one of the top estates in Bordeaux. Expect citrus aromas and peach fruit with a subtle wood note.

From the historic plot of “l’Enclos,” few “Second Wines” garner the prestige of Les Forts de Latour. Only subtle differences distinguish Les Forts from the Grand Vin of Chateau Latour. Both in the vineyard and in the cellar, the wine is produced with the same care as the Grand Vin, but a slightly higher proportion of Merlot and less new oak allow for a much more accessible wine in its youth. Six years on from harvest, 2014 Les Forts de Latour is drinking exceptionally well right now. Made from 50% Cabernet Sauvignon, 42% Merlot, and the rest Petit Verdot, this classic Pauillac is loaded with currants, lead pencil shavings, and spice. It’s hard to imagine a better choice for a holiday treat to pair with a special meal. 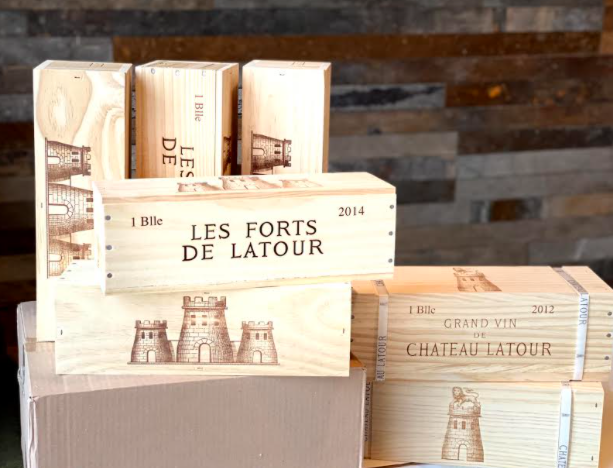