Closing Chapter for the Portuguese Estate Quinta do Centro, Deeply Reduced Prices on the Last of the Red Wines from Sonho Lusitano

We’ve gone through many vintages of the wines of Sonho Lusitano Vinhos and even had owner Richard Mayson host a dinner party here in Birmingham a few years ago. After 12 harvests, this Portuguese project has come to an end but the team are proud to have helped to put the sub-region of Portalegre on the map. While we await the next chapter for Richard Mayson, his winemaker and partner Rui Reguinga, and the estate of Quinta do Centro, we are offering the last of their production at a significant price reduction. These are not wines at the end of life. On the contrary, they are presently in an ideal drinking window.

As a distinguished wine writer and author of five books on Portuguese wine, the British-born Richard Mayson has championed Portugal as a treasure trove of varied terroir and indigenous grapes with world-class potential. He fell in love with Portugal in 1979 when he worked for a summer at a restaurant in Algarve. 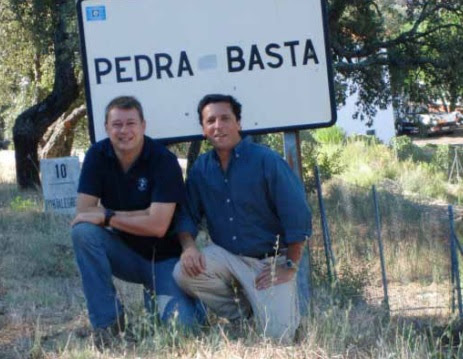 As early as 1989 he had identified the under-the-radar Portalegre sub-region in the Alentejo in the south as an ideal breeding ground for great wine: The high altitude of the Serra de São Mamede mountain range, the moderate climate, and the stony soil all promised to produce excellent wines.

With the goal of producing wines firmly rooted in the local terroir, Richard purchased the Quinta do Centro vineyard in 2005 and created Sonho Lusitano (Lusitanian Dream) with winemaker and consultant Rui Reguinga. Rui hails from the central province of Ribatejo and began his winemaking career in 1991 working at the local co-operative in Portalegre. After working with well-known winemaker João Portugal Ramos he established his own wine consultancy business where he advises a number of leading properties, mainly in the southern half of Portugal.

Quinta do Centro is located on the slopes of Serra de São Mamede at around 1,600 to 1,800 feet above sea level. The property lies on the edge of the São Mamede Natural Park where it spans a shallow valley where the soils are poor, full of granite, and generally well drained. It is an estate with a bright future, indeed.

Drinking at its peak, “Pedra Basta” (Enough Stone) is a blend of Trincadeira, Arragonez (aka Tempranillo) and Alicante Bouschet in roughly equal proportions with a small quantity of  Cabernet Sauvignon. The wine is aged in new and second year barrels for 12 to 18 months before bottling. Richard Mayson’s own tasting notes declare, “the tannins are good, broad and ripe and the wine is characterised by the freshness which is our hallmark here in the Serra de São Mamede.”

“Pedra Y Alma” (Stone and Soul) is Sonho Lusitano Vinhos reserve wine produced only in the best years and from the oldest vines on the property. It is a blend of Trincadeira, Arragonez, Alicante Bouschet, and Grand Noir that is aged for two years in new French oak barriques. The 2013 vintage saw a late harvest that began in searing heat and ended in rain. It was a highly successful year for Trincadeira and the estate picked the old vine fruit just before the weather broke at the end of September. It is a tight-knit but generous and well-balanced red that will keep on giving.