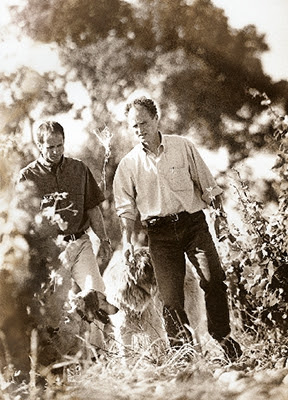 Domaine Les Pallières was one of the great properties of Southern Rhône for centuries before falling into disrepair. By the late 90s, the current owners were ready to sell. The Brunier brothers and their longtime importer, Kermit Lynch, saw an opportunity to revive some of the top terroir in Gigondas and purchased the estate.

The group put a great deal of effort into rehabbing Les Pallières. Terraces were constructed or reinforced to provide better water retention. A new gravity-fed winery was designed to allow for handling the distinct parcels of the estate individually.

Indeed, the cuvée “Racines” is produced entirely from parcels in the lieu-dit of Les Pallières with grapes from the estate’s oldest vines — an average of 70 years. The blend is 80% Grenache, 15% Syrah and Cinsault (co-planted), and 5% Clairette. The fruit is hand-picked, with double sorting at the vine, then a third sort in the winery. Traditional fermentation is achieved in temperature-controlled concrete and wooden vats. Aging takes place over 20 months in 60 hectoliter French oak foudres before the wine is bottled unfined and unfiltered.

Lovely aromatics of cherry jelly and dried herbs precede a sip that is fully ripe and velvety, yet still balanced and bright. A spectacularly earthy, mineral finish lasts well into the next sip. Try a bottle with your next order of kibbeh nayeh takeout for instant transport to the Mediterranean.